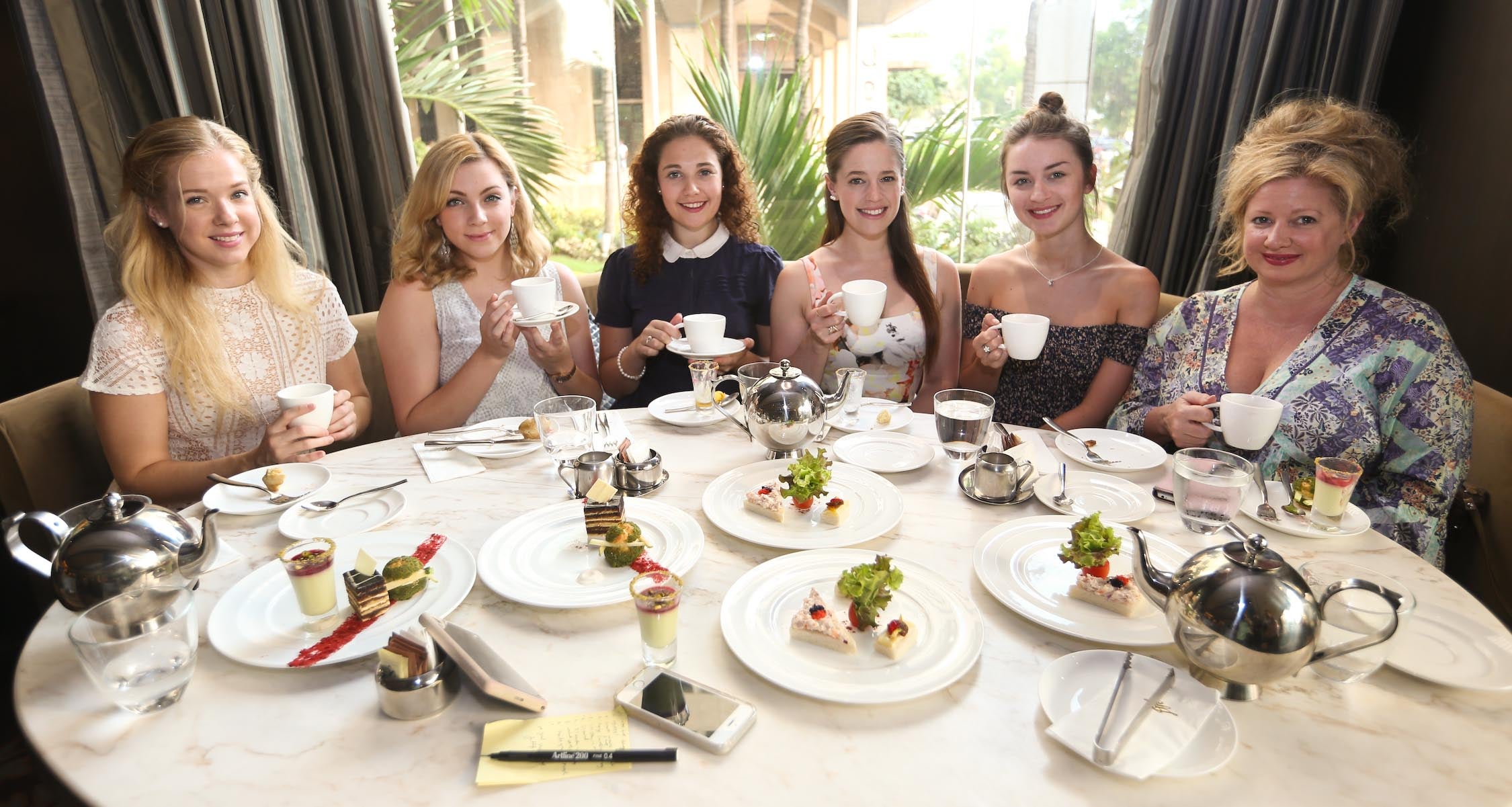 The lovely ladies of ‘Les Mis’

“Les Miserables” is a well-loved musical with celebrated female characters. The talent of the show’s female cast members is on grand display onstage, but what does it take to be a “Les Mis” lady?

Over desserts of matcha cookies, scones and mini cakes at the Lobby Lounge of Diamond Hotel, they share what makes their job awesome, what happens backstage and what’s that one thing they hate about the musical.

Rachelle Ann Go, who plays Fantine, was under the weather and was not able to join the group.

For Greenland, the best part of being Éponine is that “My character can touch so many lives in the audience every night; I think that is very special.”

Walsh as Madame Thénardier says, “I’m just really glad I am able to scream at small children. I don’t really do that in normal life. I also get to scream at my husband, which I am sure a lot of women can relate to.”

Being bitchy is also a challenge for Daley, who also plays a mean factory girl: “I give Fantine a hard time. It’s very different from me as a person, as I don’t go around slapping people, but I get to play a bitchy character and it’s fun.”

As part of the ensemble, Du Leslay says the scene backstage is crazy: “It’s a fast-moving show. We never have time to sit down, but all the costumes are beautiful, from the wedding to the harvest.”

Hull, the ensemble newbie and one of the youngest members of the cast, says it’s her first time to travel to perform. “I still live with parents back in Australia, and I love the variations of the characters, the quick pace and all the running around backstage.”

On their first day in Manila, Walsh says Go took them to a Filipino buffet where “there was a lot of pork, chicken, rice—all good.”

“Filipinos are a very passionate audience,” says Hull. “But the nerves don’t go away wherever we perform, though it’s a good amount of nerves.”

“They tweet the next day that they feel so hung over from ‘Les Mis.’ It’s fantastic!” adds Daley. “Although it doesn’t get any less nerve-wracking. Back home in Australia, people always ask if it’s really scary. It is, every single time!”

What about bad reviews?

“If I have to take good reviews, I gotta take the bad ones, too,” says Langridge.

“It’s kinda none of our business,” adds Daley. “Everybody’s allowed an opinion. Everybody keeps talking.”

“What’s nice about social media is that no one will tag you and say, you are horrible!” Langridge says, laughing.

After performing, Daley says she chills by watching shows on Netflix, while Walsh drinks a glass of wine before bed. It has to be “something happy,” explains Du Leslay, because “Les Mis” is such an intense drama that the girls often get dark moods and “character hangover.”

“I cry every night when Eponine dies,” Daley says. “Even when I’m not too emotional that night, and I’m determined not to cry, I cry. I cried last night.”

Hull said she cried for hours after her first full run-through.

“For us newbies, it was really intense. We were crying for hours and we’d stop, and cry again. It’s very therapeutic when you’re having a bad day. You’re in the barricade, so OK, cry!” she says, laughing. “And if you’re having good day, I’m like, yeah! I’m having such a good day I’m gonna cry happy tears.”

Greenland chimes in: “I’m in the ensemble at the start of the show. When I prepare to be Eponine, I always find myself sitting alone in a dark little corner backstage.”

“When Jean Valjean is dying, I get so emotional,” Walsh adds.

During these depressing snippets between scenes, Greenland says going backstage is a relief: “After the barricade scene, you’d find smiling faces backstage, someone from the dresses or wigs department. And I’m reminded that we’re here with friends.”

But what if it’s someone from the audience who cries audibly, or sings out loud?

It happens, says Greenland. “In the Australian tour, we were singing the final song in the epilogue, and there was a lady who was singing ahead of us! We were laughing, people are so involved.”

“In a preview, Eponine was dying and it was a very  quiet moment. I heard someone crying so loudly. It’s OK, but there’s a part of you that says, ‘stop doing that!’” Langridge says, laughing.

These actresses are major “Les Misérables” fans, but if they could change one thing about the story, what would it be?

Greenland raises her hand: “I’m not gonna die! I really want Eponine not to die. And for Cosette and Eponine to be friends.”

“I think Madame Thénardier should leave her husband and run off with Jean Valjean,” says Walsh, sipping her tea.

“They win the barricade,” adds Langridge.

Now let’s talk about the one thing they hate about the show.

Langridge says as Cosette, she finds being detached from the rest of the cast difficult: “Once I’m done with the ensemble part at that start, I can’t speak to anyone except Marius and Jean Valjean. I’d love to be in the barricade and be involved, but I am secluded. I just hang out in the swing.”

As a mean factory girl, Daley says, “I find it hard to be nasty to Rachelle Ann Go, because she’s very beautiful and she’s a lovely person. It breaks my heart a little bit. Afterwards, I’d go, ‘OMG, is she OK?’”

For Greenland, it’s not really being friendzoned as Eponine—it’s the dirt. “It’s like putting thick eyeliner on your body. It’s so difficult to get off! I’ve bruised myself.”

The cast wears very little makeup, but they have to smudge on long-wearing dirt, a necessary 19th-century Paris prop.

“You put it on, play your character as a dirty, grungy beggar, and you come home and it’s still with you,” explains Daley. “You have to scrub it with moisturizer.”

Walsh adds: “With Madame Thénardier, the uglier the better. I have to be the ugliest I can possibly be, then add more dirt.”

But not everyone hates the dirt.

“I think I have to get back to you,” says Hull. “I haven’t been in it long enough to hate anything yet. I love the dirt!”

“Les Misérables” is on an extended run until May 1 at The Theatre at Solaire, Pasay City. Call 8919999; visit www.ticketworld.com, www.lesmis.com.ph