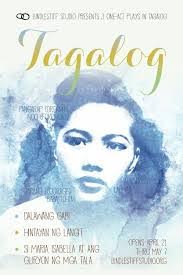 Peña, who is also Ma-Yi’s artistic director, recently directed “Macho Dancer: A Musical” at the 2015 Virgin Labfest in Manila.

Chilip was in Ma-Yi’s revival of Peña’s play “Flipzoids” and is thrilled to be working with the theater group again.

“Ma-Yi does amazing work,” she said. “In this production, I get to collaborate with these insanely talented people whose work I’ve admired. I’m really proud to work alongside them. On a personal level, it makes me very happy to see Filipinos portrayed in mainstream theater, whether I’m the one playing them or not.”

Born and raised in Manila, Chilip said her mother nurtured her love of theater.

“She was a season subscriber of Repertory Philippines and she used take our family to see all its plays,” Chilip recalled. “I absolutely loved it. It was such a treat and I’d always look forward to the shows.”

She was already working at a consulting firm in the US when she began taking acting lessons for fun and getting professional work. She pursued a master’s degree in acting at Brown University.

Chilip has since acted with theater groups across the US in productions like “Our Town” and “Chinglish” for Portland Center Stage; “The Intelligent Homosexual’s Guide to Capitalism and Socialism with a Key to the Scriptures” for Berkeley Repertory Theatre; and “A Dream Play” for National Asian American Theatre Company. She’s also been on TV shows such as “Mysteries of Laura” and “Royal Pains.”

Chilip was also in “Golden Child” in Manila for Tanghalang Pilipino, for which she received a Philstage Gawad Buhay! citation for Best Performance by an Actress in a Lead Role.

Bindlestiff Studio’s “Tagalog: A Festival of One-Acts,” featuring three plays from last year’s Virgin Labfest, will be staged in Filipino with English supertitles, with previews starting April 19 in San Francisco.

“Bindlestiff’s Allan Manalo once acted in one of the earlier VL plays that I directed,” Vera said. “They recently staged a production on short plays about love, so I sent over three plays chosen for next year’s VL’s Revisited Set that are also about love.”

The three plays are “Dalawang Gabi” by Maynard Manansala, a comedy of impossible love between a college professor and her student, directed by Aureen Almario and Joe Cascasan; “Hintayan ng Langit,” by Juan Miguel Severo, about former lovers reuniting in the afterlife, directed by Allan Manalo; and “Si Maria Isabella at ang Guryon ng mga Tala” by Eljay Castro Deldoc based on Dean Francis Alfar’s short story “The Kite of Stars,” about a girl who desires to be a star to catch the attention of a young man, directed by Ramon Abad.

Velasco said he noticed that audiences responded positively to Bindlestiff’s adaptation of Shakespeare’s “A Midsummer Night’s Dream” whenever characters spoke in Filipino.

“A lot of Fil-Ams here dream for more exposure to our languages, whether Tagalog, Ilocano, Kapampangan or Visaya. We miss it, we miss home,” he noted.

Among the cast members is Lee Robin Salazar who, before relocating to the US, was in several Manila productions with Actor’s Actors Inc. such as “Hurly Burly,” “Fool For Love,” “Five Women Wearing the Same Dress,” and “Promises, Promises.”

He’s been a cohost on The Filipino Channel’s “Adobo Nation” since 2011 and has worked with Bindlestiff in productions such as “The Strange Case of Citizen De La Cruz” and “A Kind of Sad Love Story.” Other stage credits include “Everything Go Boom” at the 2013 San Francisco Fringe Festival and “Perishable, Keep Refrigerated” with Renegade Theatre Experiment.