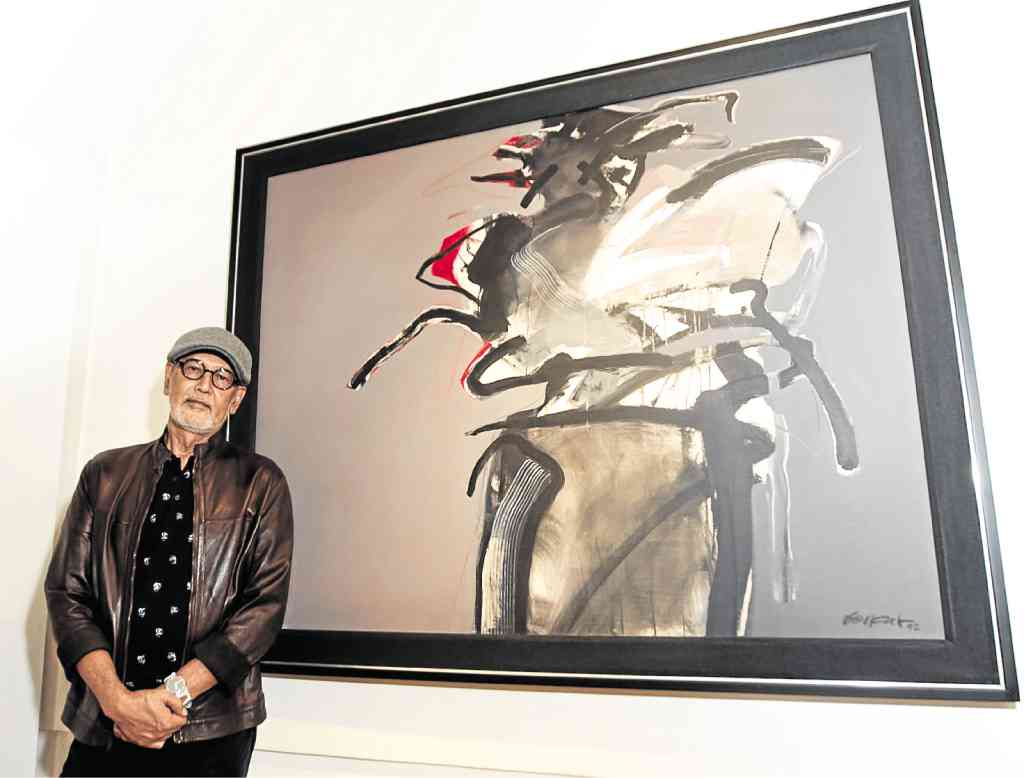 NATIONAL Artist for Visual Arts Benedicto Reyes Cabrera, popularly known as BenCab, may now rest on his laurels, but he won’t.

In the gallery showcasing the final exhibit of 50 years of his art, BenCab, who just turned 74 on April 10, discloses he still has some forthcoming major projects up his sleeves.

One he is mulling over is a book of text and visuals which may come out in two years, with an accompanying exhibit of portraits and drawings.

Recently opened is the exhibit “BenCab: Appropriated Souls,” curated by Dannie Alvarez, until May 29 in Gallery XXI on the third level of the National Museum of Fine Arts, Padre Burgos Drive, Manila.

It is the culmination of a year-long series of thematic shows in eight museums commemorating his 50 years as artist. It follows the retrospective “BenCab: The Filipino Artist,” which ended Feb. 27 at Metropolitan Museum of Manila.

While the Met exhibition, which the artist calls his biggest so far and the most comprehensive, traced in thematically arranged pieces the evolution of his art since his student days in the 1950s, the National Museum exhibit focuses on his “Larawan” and “Sabel” series in 80 pieces, mostly in acrylic on canvas and paper.

The two series are unarguably the iconography that catapulted the artist to international fame. These images are among the most recognizable in Philippine contemporary art. One can say then that this show is the crowning glory of BenCab’s art.

Here is Sabel, the scraggly scavenger wrapped in plastic sheets who haunted the Sta. Cruz district of Manila in the early 1960s when the artist was still living on Yakal Street.

“She was married, but she was abandoned by her husband, which must have caused her derangement,” he speculates. “Nakikita ko siya from my window. She’d beg around for food. I’d just watch and do some sketches and photos of her. She’d come to our house and my sisters would give her some food. She had children. They’d take her home, give her a bath, but she would return to the streets.”

He saw her around the Bambang area in Tondo for two years, until she just vanished into memory. But art, as it happened, captured her, and she has gone through many transformations since, from abstract to Japanese lady to dance to fashion to musical.

The permutation of the image naturally followed the various art movements BenCab went through over the decades, from Social Realism to Abstract Expressionism to Minimalism.

While a student at the University of the Philippines College of Fine Arts majoring in Illustration in the early ’60s, he imbibed the temper of the times and painted barung-barong, estero, laborers, scavengers, displaced people.

When he relocated to London in the 1969, he recalls the dominant movements there were Pop Art (Richard Hamilton, David Hockney, Jim Dine), Minimalism, Op Art (Bridget Riley). Traces of them can be found in this exhibit.

Here are the “Larawan” paintings, mostly sepia-toned portraits based on Filipiniana prints and vintage photographs from postcards, travel journals and ethnographic books he found in antique shops and flea markets in Europe. Here he expresses not only some social commentary on his country but also a deep nostalgia for his homeland.

In a few portraits, the old-

fashioned figures are mixed and matched with jarring details in a brutal juxtaposition: “Two Mestizas” (2000), with a Japanese parasol; “Two Filipinas” (2004), with modern gadgets; “Sabel (Swatch).”

The third stands out as it is the only image here that shows intense emotion, with Sabel’s face half-covered by a swathe of clothing and her eyes narrowed, obviously weeping.

Two vitrines showcase specimens of BenCab’s art. One contains his sketches, doodles, a cross-hatched study on yellow pad paper, accompanied by poems in homage to his art, by Marne Kilates, Gemino Abad and Virginia Moreno.

The other has miniatures of his artworks in various mediums: “Sabel” on ceramic, metal, glass, gold and silver; even a “Sabel” mini art book.

There is a flat cut-metal sculpture, “Twins” (2013), of mild steel painted black with red brushstrokes, based on a 2002 painting.

By the entrance are “Multiple Sabels” in six panels, painted black on white Mariwasa tiles; and “Variations on Sabel” (2010), 25 figures in black and ochre—all resembling multiple exposure of film negative.

Joya’s “Ethereal Aura” (1977), a white-and-gray abstract in acrylic, is evoked in “Sabel in Motion” (2010), “Isadora Dancing” (1999) and “Variations on Sabel” III (1992). That whirling amorphous form and mist of monochrome could be a template for the structure and translucence of BenCab’s swirling shape.

Having lived for 13 years in London, he is also naturally drawn to the works of British artists of that era. He finds British Pop Art somehow “more intellectual,” as it has “more depth,” than the American variety, which is “louder and bigger.”

Of foreign artists, his favorites are Hockney, Kitaj and Lucian Freud.

Hockney’s precise lines, minute details, flat color planes and pure colors appear in the neat composition and clean coloration of BenCab’s later works. Freud’s flesh tones he also cites —and we may add Freud’s sculptural approach to the human body, as all hinted in some of BenCab portraits.

“I like classic colors,” he says. “It took me a while to use color.”

Accustomed to the black-and-white illustrations he was doing for Liwayway and Sunday Times Magazine, he used the warm harmonies relatively late. His earliest paintings are monochromatic, chiefly in brown, gray and black, such as the 1967 and 1968 versions of “Sabel.”

Representative early works, all imbued with the earth tones of Manansala, can be seen in a neighboring gallery: “Imaginary Portrait of Sabel” (1969), oil on canvas, an abstracted figure with back turned to the viewer, in brown, black, burgundy, gray and beige; “Manggagawa” (1968), oil on canvas, in brown and slate; “Self” (1965), oil on canvas, a self-portrait that looks like Jesus Christ, in brown, slate, gray and greenish impasto; a 1967 series of 10 pen-and-ink drawings of human figures, shanties, driftwood.

In the early ’80s, BenCab encountered bright colors among the punk subculture at King’s Road in Chelsea. That was when his chromatics started to brighten, predominated by red (from London’s bus and telephone). But gray remained (from the English landscape, fog, rain and sky).

“I don’t use much blue,” he says in an odd afterthought.

Yet one of the most outstanding pieces in the exhibit is “Blue Sabel” (2005), which exudes a cool incandescence.

Strategically placed in the gallery are three small sculptures of painted resin, in red, brown, gray, black and blue: “Larawan,” “Sabel” and “Dance of Defiance,” done in collaboration with Secret Fresh.

Done last year, these are among the latest artworks he created, he says, and adds: “[After that,] I just keep on drawing.”

The series of eight exhibits, “BenCab: 50 Creative Years,” marks the 50th anniversary since the artist first mounted a show, in a joint exhibition at the Art Association of the Philippines gallery in 1965. He held his first one-man show in Gallery Indigo the following year, introducing “Sabel” to the public.

It was not until 1968, however, that his artistic career was formally launched—when future National Artist Arturo Luz “discovered” the 26-year-old artist and exhibited 60 social-realist acrylic paintings in his prestigious gallery.

BenCab’s “creative years” actually covered more than half a century. At age 7, he was already drawing and painting on walls and pavement, inspired by elder brother Salvador, then an established painter.

In Grade 6, he won the top prize in a poster-making contest, his first art award. In high school, he did illustrations for his classmates’ science projects.

In college, he helped Joya create sets for a ballet; was commissioned to illustrate two books; and won a prize at the Shell National Students Art Competition.

Sometimes he spends months working on a painting, as when he’d put an unfinished piece aside and return to it much later.

“You get bogged down on a painting, that’s when you take longer,” he says. “But in a frenzy, I can finish a piece in an hour.”

To him, a painting doesn’t need to have a message. His art philosophy is more of “form over content” (though it depends on what he’s working on at the moment). He is more concerned with the line; color follows.

At the Feb. 28 opening of his National Museum show, he said: “Every line I draw and every stroke of the brush teach me that there is always more to learn.”

He is still open to exploring other mediums for his art, such as drawing on electronic tablets to create digital paintings on touchscreen.

So, when he said at the exhibit opening, “My cup is full”—the listener was only half-believing, because this man could certainly do with another round.