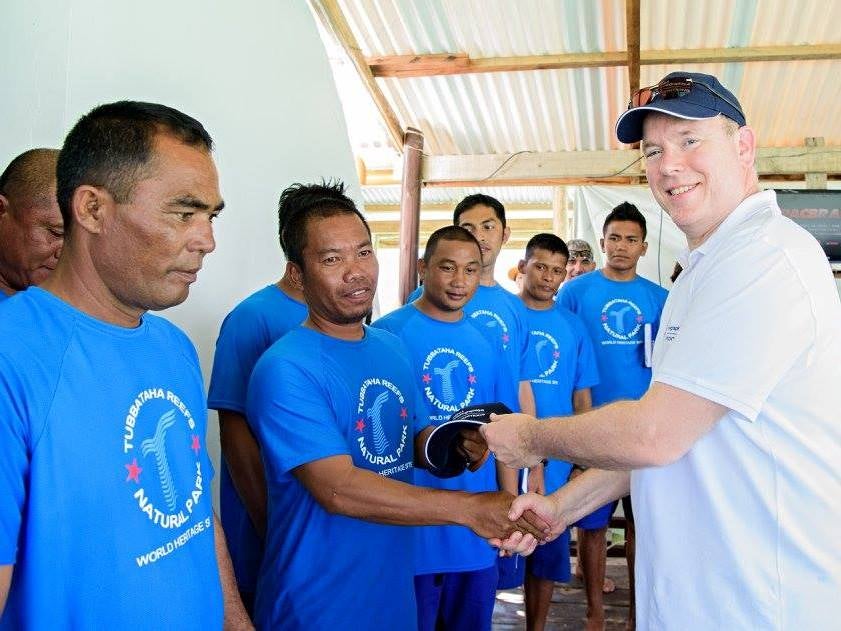 PRINCE Albert II presents each marine park ranger in Tubbataha a hat from the Oceanographic Museum of Monaco.

Of course there was a luncheon in Malacañang to welcome His Serene Highness Prince Albert II of Monaco to the Philippines. But the royal, who evidently has a passion for the ocean and marine life, also took a trip to Palawan, in particular to the Tubbataha Reefs Natural Park in the Sulu Sea—a United Nations Educational, Scientific and Cultural Organization  World Heritage Site—to dive in the renowned marine park, according to information on the Friends of Tubbataha Facebook page.

The Friends of Tubbataha reported that he was accompanied by Robert Calcagno, CEO of the Oceanographic Institute Foundation Albert I, Prince of Monaco.

The Prince met up with Tubbataha’s Protected Area Superintendent (PASu) Angelique Songco, presented hats to Tubbataha’s unsung heroes, the park rangers, and donated two satellite tags for turtles, courtesy of the Oceanographic Museum of Monaco, which the Prince’s great-grandfather inaugurated in 1910.

Also, according to the Fackebook page, two turtles—a 96-cm green turtle (Chelonia mydas) and a 53-cm hawksbill turtle (Eretmochelys imbricata)—were fitted with the satellite transceivers, and were named Jacques and Gabriella, respectively, after the Prince’s twin children.

He also spent an hour in the heat on Bird Islet, an important stop for migratory seabirds in the Sulu Sea, where he was briefed by Tubbataha Research officer Retchie Pagliawan on the status of the different species that roost there.

Prince Albert even picked up garbage along the way, noting how ocean debris can be fatal to marine life—and how people should change their modes of consumption to save the oceans.

Prince Albert arrived last April 6 for an official visit on April 7-8, but stayed on for a private visit on April 8-14.
Last April 6, he held a private ceremony to honor Consul General of the Philippines to Monaco Dr. Stephen Zuellig with the title of Commander in the Order of St. Charles.

In Palawan, the Prince visited El Nido Resorts, Puerto Princesa, Tubbataha and Amanpulo, in cooperation with the Oceanographic Institute of Monaco and his own foundation, the Prince Albert II of Monaco Foundation.

The Prince’s dives were filmed to bring world attention to marine-protected areas. He also lauded the work of the park rangers and Tubbataha park management.

The Prince stayed at Pangulasian Island in El Nido, and at Amanpulo; he first visited the latter on his first trip to the Philippines in 1999.