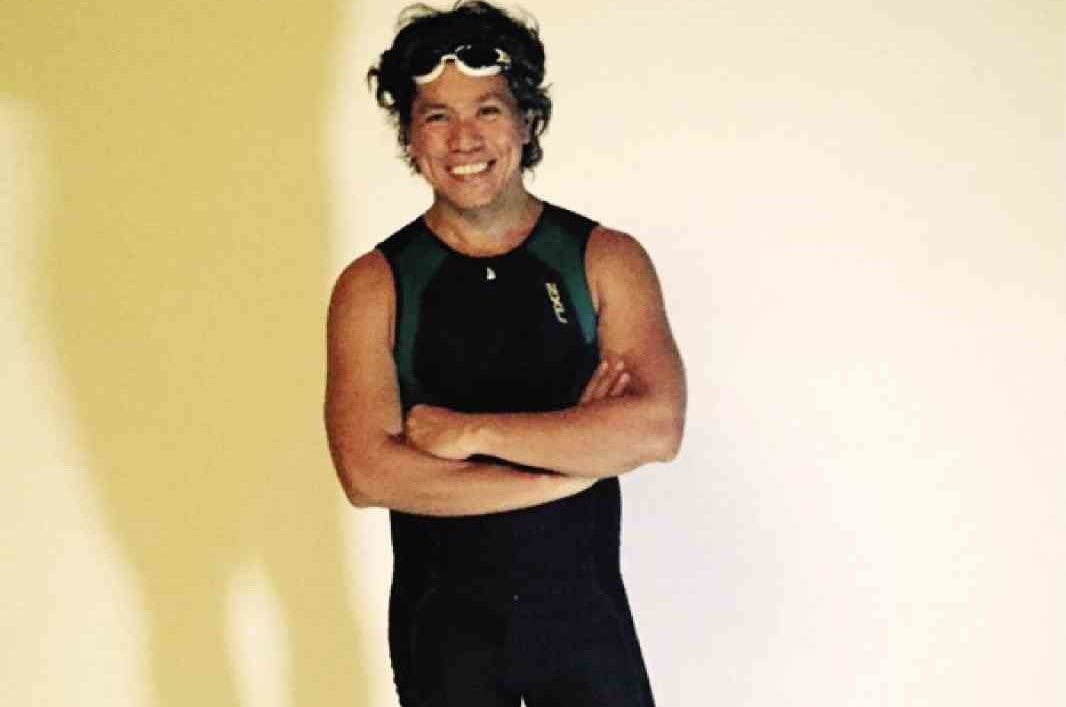 IN HIS first triathlon suit

DESPITE being diligent in the gym, complete with a trainer and supplementary classes, designer Dennis Lustico felt that his body was no longer responding to the routines.

And then gym buddy and entrepreneur Josef Gueta invited him to take up triathlon. Gueta said that since Lustico had an athletic build, he could develop his talent.

Two years ago, Lustico watched a triathlon in Subic Bay and was swayed by the high energy and the solidarity of the participants.

“Their energy and camaraderie convinced me to try it out,” says Lustico.

He then tapped a coach to train him for triathlon swimming. Unlike competitive swimming, relay swimming in a triathlon not only requires speed but also efficiency in conserving energy for the succeeding bike and run.

Instead of forceful kicks and short arm strokes to develop speed, Lustico discovered that swimming for a triathlon or open water requires buoyancy and leverage. He had to relearn the correct body position, which facilitates speed, while only 30 percent of the effort comes from propulsion.

“Instead of fighting the water for fear of drowning, you float and glide. That was the biggest adjustment for me,” he points out.

After several months, he joined swimming relays, the first of which was the Century Tuna 5i50 2014 in Bohol. His first triathlon was the Safeguard 5i50 2015, also in Bohol, organized by Sunrise Events.  Among the 66 participants in his age group of over 45, Lustico placed 16th, with a time of three hours and 18 minutes.

Lustico engages coaches for the different events. On weekdays, he  bikes 30 to 40 kilometers between Makati and Mall of Asia. During weekends, he joins his friends on long rides from Makati to Nuvali.

He powers up with peanut butter sandwich and bananas for energy, drinks Gatorade and water before the ride, and rewards himself with a protein shake and tapsilog after the trip.

He runs with his personal trainer from RCBC to McKinley Road, Heritage Park, McKinley Hills and the whole BGC—all of 26 km.

On his own, Lustico would run for 10 km from his home in Santiago Village, Makati, to Ayala, McKinley Road and back. He does the laps at Makati Sports Club and Makati Sports Arena.

Asked if he gets bored with the repetitive training, Lustico says he has adjusted: “At first I asked myself, ‘Why am I doing this?’ You develop patience and learn to love it.”

Through this sport, he widened his circle of friends outside of the fashion world. “I’ve met other professionals who are businessmen, lawyers and doctors. I like the fellowship. If you’re biking in Nuvali and get a flat tire, somebody will offer to help you. When you’re biking, other bikers will warn you against bumps on the road or approaching cars so you don’t get sideswiped. They’ll offer to help in any way.”

The sport has changed his lifestyle. He has chucked white rice for whole grain rice, sweet potato and boiled banana, and combines more fish and vegetables. Lustico is in bed before 10 p.m. to wake up at 4:30 a.m. for his morning run.

“My life now has more structure and discipline. I’ve learned to control the intake of alcohol,” he adds.

Since he started two years ago, Lustico has lost nearly 10 pounds and trimmed his waistline to 32 inches.

“I’ve become more appreciative of function in clothing. Comfort is very important. It’s slowly changing my approach to design,” says Lustico. He no longer embellishes for the  sake of embellishing. Instead, he designs for comfort and maximum freedom of the wearer.

At this stage, the designer is batting for a full triathlon under three hours.