Pesto pasta with sundried tomato and artichokes, for his wife and no. 1 critic | Inquirer Lifestyle ❮ ❯ 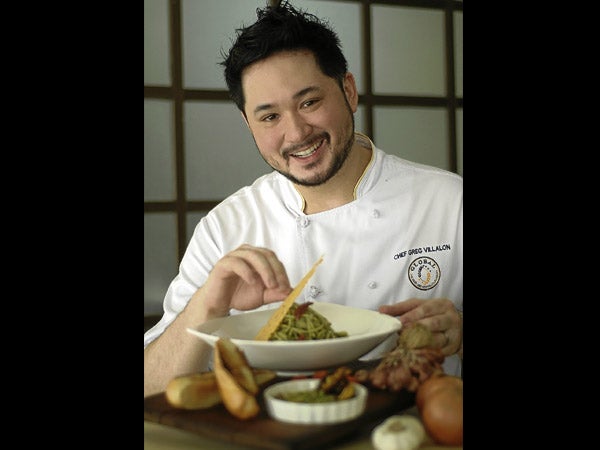 Pesto pasta with sundried tomato and artichokes, for his wife and no. 1 critic 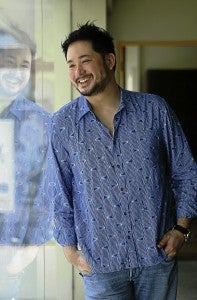 However, Villalon, who’s 6-ft tall, prefers to wear a spanking white chef’s jacket, and be a culinary teacher.

Villalon is Global Culinary and Hospitality Academy’s head of operations. He is a graduate of Le Cordon Bleu, Canada, with a degree in Classical French Cuisine. He has trained in Signatures Restaurant by Le Cordon Bleu, a five diamond-rated restaurant by the Canadian/American Automobile Association, as well as in Mobil Food Guide and Westin Hotel, Ottawa, Canada.

He has also worked in prominent restaurants in Canada, Singapore and the Philippines. Villalon is a certified Servsafe Food Protection manager; Servsafe is a food-safety training and certificate program guided by the National Restaurant Association.

He’s taught for seven years and is now responsible for the creation and implementation of individualized learning at Global Academy.

Before this, Villalon was in a field distant from culinary arts—he’s a graduate of Social Science at the Ateneo de Manila University.

“Honestly, I really didn’t want to go into college,” says Villalon. “After my high school at Ateneo there was not much option in culinary schools. HRM was offered only at UP. So I settled for Social Science.”

Villalon’s interest in food began when his parents ran a restaurant in the ’90s.

“My family used to run a Spanish restaurant (Euskadi) at the Manila Jai Alai building,” he says. “That was where I got my interest in cooking. I also managed it for a while before my family decided to close it down.”

“Looking back, I began tinkering in the kitchen in high school. I would cook my own food if I didn’t like the food at home. I love grilling, so I would play with the marinade or cook roast beef. I wanted to eat good food basically when I was a kid. That led me to the kitchen.”

He can now dish out any cuisine—French, Middle Eastern, Spanish, etc.—but at the end of the day, Villalon says it would always be Pinoy food for him.

His wife of three years, Tessa Nieto Villalon, a commercial model and fashion entrepreneur, loves Italian dishes, “so I often prepare pasta and salad for her.” 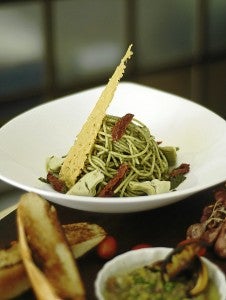 Tessa is also Villalon’s number-one critic—“sometimes too critical at some point because she has already learned from me,” Villalon says, laughing.

Having a chef for a husband, his wife has become more knowledgeable about food and can easily decipher the ingredients on her plate.

Believe it or not, Villalon doesn’t cook at home. Instead, he and his wife dine out. The couple hasn’t even had a romantic dinner at home.

“I cook only upon her request or when it’s her birthday,” he says. “If there’s a special occasion, I want to enjoy it, too. I don’t want to cook. I want to eat.”

Since his wife loves pasta, the chef has prepared Pesto Pasta with Sundried Tomato and Artichokes, served with Parmesan Tuile, Fresh Bread, and a Roasted Garlic and Anchovy-Lemon Oil Dip.

The spaghetti is cooked with all fresh ingredients; the sweetness of the tomatoes stays in the mouth even after a delicious al dente bite.

The addition of parmesan tuile and bread dipped in olive oil fused with anchovy and lemon lends a touch of sophistication. 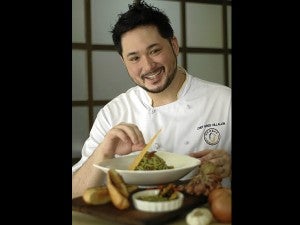 Cook spaghetti noodles, toss in oil and set aside.

Combine basil, pine nuts, parmesan cheese and olive oil in a blender. Season with salt and pepper to taste. Set aside.

For the parmesan tuile:

Line a tray with silpat. Arrange grated parmesan cheese in rectangular shape. Bake in the oven until golden brown (about 3-4 minutes). Allow to cool and cut into small rectangles. Set aside.

Slice baguette into quarters. Brush with melted butter and bake until golden brown.

Cut garlic bulb crosswise into half. Drizzle with olive oil and bake until soft, about 15 minutes. Remove from oven and mash in a bowl together with the anchovy. Add in lemon rind, chopped parsley and olive oil. Mix well.

Sauté the chopped onion, sundried tomatoes and artichokes in pesto. Add in the cooked spaghetti and season with salt and pepper to taste. Serve with parmesan tuile, bread, and dip on the side.