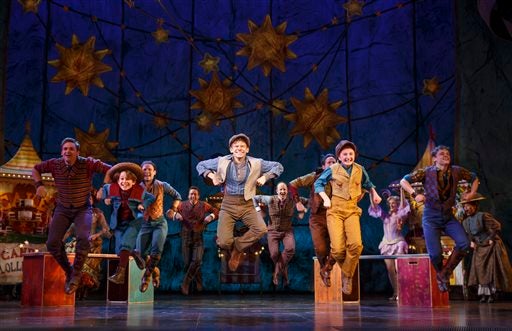 Young adult fiction booming on Broadway but cute it ain’t

NEW YORK — When actress and playwright Claudia Shear was first approached to turn a novel for young adults into a Broadway musical, she was slightly stunned.

“You want me for a children’s thing?” she asked the producers.

Shear, after all, often writes about fearless women making their way in an unforgiving world and isn’t frightened by suggestive situations or salty language. She agreed to the new project but didn’t change her style.

“I went at it without any concept of it being for children,” she said. “Truth is truth and humanity is humanity. That is the thing that supersedes any genre.”

The musical was “Tuck Everlasting,” Natalie Babbitt’s powerful story about a girl who stumbles onto a mysterious family that has discovered a fountain of eternal life. It opens on Broadway on April 26.

It will cap a remarkably rich few years for shows based on young adult fiction, including “Matilda the Musical,” ”War Horse,” ”Aladdin” and “The Curious Incident of the Dog in the Night-Time.” All stubbornly refuse to talk down to kids.

“The only difference between them and us is that they’re smaller and they know a little bit less,” said playwright Dennis Kelly, who won a Tony Award for adapting “Matilda” from the children’s novel by Roald Dahl. “Their brains are just as good as ours and they know as much about the world as we do.”

It turns out that Shear was in good company: Musicals based on young adult books have recently attracted writers who usually deal with adult material and don’t want to coddle their younger audiences.

Kelly, like Shear, wasn’t someone you’d immediately associate with children’s literature. He writes caustic satires, including a play about how a climate of terror can lead neighbors to torture, and another about the evils of greed-is-good capitalism.

“When I was doing ‘Matilda,’ I didn’t think I was writing for kids. I was just having a really good time,” he said by phone from London. “I mean, clearly, there are some things you might well steer clear of, but you’ll find you’re naturally steering clear of it.”

Playwright Simon Stephens was similarly an interesting choice to adapt Mark Haddon’s best-selling novel “The Curious Incident of the Dog in the Night-Time,” about a teenager with Asperger’s syndrome. He writes gritty dramas that are often bleak, dark and violent.

“My imaginary world tends to be a dark old place populated by psychopaths and killers,” Stephens said. But it was precisely that dark quality that appealed to Haddon: Stephens wouldn’t be sentimental when it came to adapting his novel.

For “Tuck Everlasting,” the central character comes to learn that eternal life might be a curse and not a blessing. It explores living in the moment and the meaning of life and death. Shear was naturally attracted to it.

“Children’s’ literature is so potent,” she said. “All great children’s literature has death in it — Beth dies in ‘Little Women,’ the horse dies in ‘Black Beauty,’ ‘Bambi.’ Any great children’s book deals with things that are so profound. It isn’t just the pretty dress.”

She teamed up with Tim Federle — who has written a series of children’s books like “Better Nate Than Ever” and just published “The Great American Whatever,” his first young adult novel.

Federle said their object was to not just write a good show for children but one adults and children could love. “Our goal is to always give them a sophisticated show that feels like it’s worth a Broadway ticket price but that evokes the magic of being young,” he said.

More family-friendly musicals are expected to land on Broadway in the next 18 months, including “Frozen” led by edgy director Alex Timbers, “Anastasia” with a book by Tony-winner Terrence McNally, and another Dahl adaptation, “Charlie and the Chocolate Factory.”

Kelly, who created a truly unforgettable villain in the terrifying headmistress Miss Trunchbull for “Matilda,” said his advice for any young adult adapters is always to focus on the story, not the audience.

“Kids, more than anything else, are responding to a story. They just want to be told a good story. And if you can’t do that, then you’ve got no chance with them,” he said. And, he advised: Don’t hold back: “We really do expect them to be stupid but they’re big thinkers. They love a big old think.” TVJ