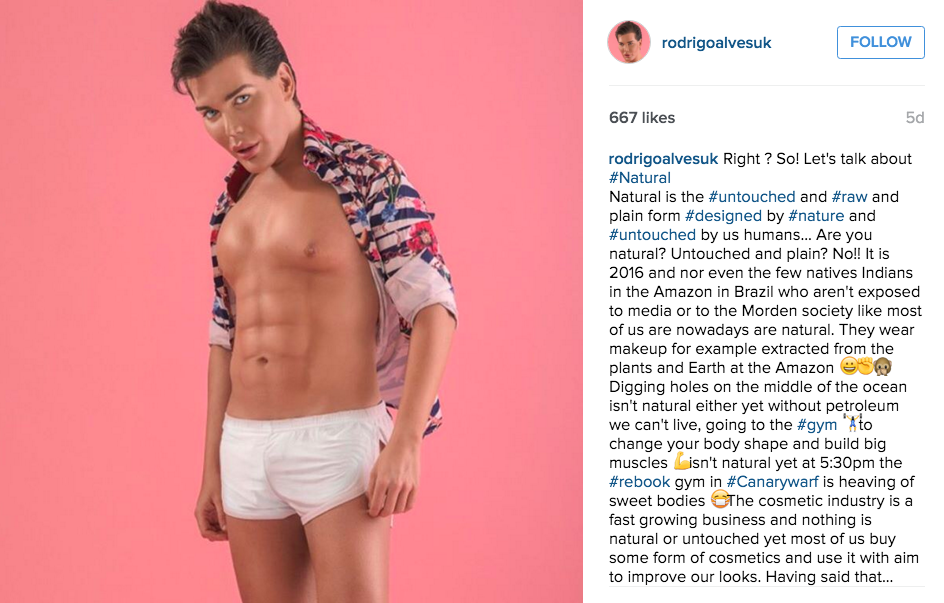 Forty-two surgeries since 2004 and perhaps much more surgeries to come for Brazilian model Rodrigo Alves, an endeavoring ‘Human Ken’ wannabe.

The 32-year-old hunk was hospitalized for acquiring skin necrosis, a condition where the new tissue flesh has died out, causing blood clots and disturbed blood circulation. He contacted necrosis after his recent cosmetic procedure to sculpt and trim his nose.

Because of his perpetual habit of ‘perfectionism’, his newly-decorated nose is already infected. “A horrible hole has appeared in my nostril and the infection is eating my nose and I’ve been warned if it is not stopped, it could eat into my face,” Alves told The Daily Mail last week.

He also blamed the humid and misty weather in Spain for the surgical blunder. “It’s very hot and dusty here (in Spain) and I wonder whether this might have set the infection off,” Alves blurted out.

The Brazilian model underwent other perilous surgeries, such as abdominal implants and pectoral implants. With money from his grandparents’ inheritance, airline job, and rental income, he splurged nearly 305,000 pounds (PhP 20.24 million) on his 42 ‘life-threatening’ surgeries.

Alves is not the only human being ‘obsessed’ with copying the perfect features of the popular Mattel male doll. Another ‘human Ken’, American Justin Jedlica, spent more than $150,000 (PhP 6.9 million) on a series of plastic surgeries.