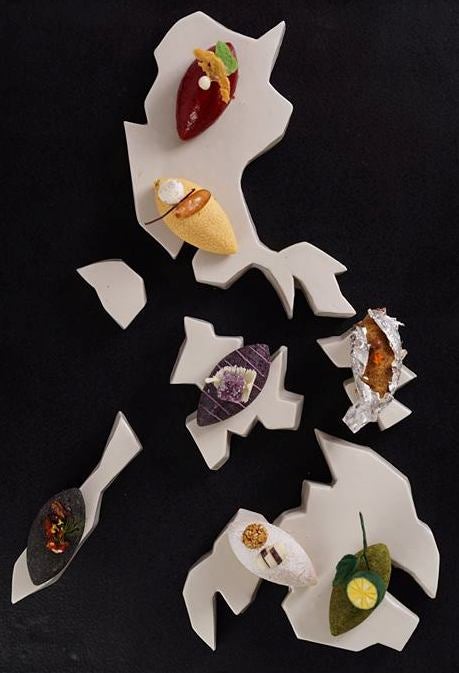 Yoshihiro Narisawa impressed Filipino delegates for his comparison of Japanese and local farmers planting rice on their respective landscapes, and then concluding there was no difference between them. He focused on the sakura, the Japanese cherry blossom, using the flowers and leaves for flavor (immersed in liquid for a year) and for texture. These he employed in his sashimi cocktail.

His baby sweetfish documentary stunned the audience, because the fish, still alive, was coated in flour and then fried.

Narisawa, chef of his own restaurant in Tokyo, employs satoyama cuisine, which utilizes virtual waste products such as bran and rice leftover from making sake.

Oscar Calleja was introduced as a chef who produces his own oysters. When he spoke, however, he added that he also prepares his well-known Japanese oyster variety for France.

Calleja lived in Mexico until he was 10 years old, which gave his palate a taste for the aguachile, used in making ceviche and perfect for his oysters. His restaurant
Annua, as well as his pubs Bistro Nacar and Mexsia Santander, uses the products of the Cantabrian sea.

Ricard Camarena is curiously known for his waterless broth. However, he used a bit of water to extract the flavors, though mainly liquid from the ingredients’ collagen and meat. He also used a lot of flavoring like soy sauce, fish sauce, lemon grass, lemon juice, shrimp paste and tamarind paste, which he said adds acidity to the dish.

For his demo, he used broth from fish heads, followed by heads and shells of prawns, and squid. Everyone got curious as to how the dish tasted, given the many flavors that went into the blender, pot and pressure cooker.

Jungle curry with no coconut milk

David Thompson was a waker-upper during his afternoon talk because he used his Brit humor to the hilt, dissing his
“nanny” (assigned to visiting chefs) and other people for not knowing how the broad leaf coriander reached Thailand when it wasn’t in the Acapulco-Manila route. He posed that question to the delegates, while also offering free dinner or lunch for four at his Nahm restaurant in Bangkok.

This chef has spread the goodness of Thai cuisine in London, Australia and Singapore. For his demo, he presented Jungle Curry, without coconut milk but with broad leaf coriander as an ingredient.

Michael “Miko” Aspiras created a different kind of polvoron using various flavors, coverings and colors, one of which we sampled at the Malacañang reception—the chocolate a cross of mousse and polvoron.

Dani Garcia reprised his yellow gazpacho that first appeared at the Madrid Fusion in Spain in 2010. It still amazed with its “nitro tomatoes,” a mousse made firm with nitrogen, and the Andalusian gazpacho cooled quickly by dry ice.

“Cocinacontradicion” was how he called his culinary concept, which combines classic recipes with modern methods. This he demonstrates at his Dani Garcia Restaurant and Bibo Andalusian Brasserie and Tapas, both in Marbella.

Peru has created its own food congress where chefs of the world converge to learn about new ingredients, especially root crops. It has also produced top chefs like Virgilio Martinez whose cooking focuses on people’s knowledge and heritage of their ecosystem.

He turned the fins, tail and bones of a fish into a work of art, covering the meat with caramelized yacon, a yellow sweet tuber. He said he goes into the forests to discover and forage for ingredients, then incorporates them into his cooking. He has three restaurants—Central in Lima, Senzo in Cuzco, and Lima in London.

Among the visiting chefs, Canadian Kevin Cherkas was the most enthusiastic, using a child’s story to introduce the ingredients and cooking at his restaurant Cuca in Bali. He proudly declared that all ingredients to be used in his demo were from that island, including pork, coffee, soft-shell crab and cacao.

Jorge Vallejo of Quintonil restaurant in Mexico City was a former sous chef of Enrique Olvera until he went on his own, including working on a cruise ship where Filipino staff taught him Philippine versions of menudo, tamales and adobo—same names but different cooking.

At the forum called Chef’s Hour, Vallejo declared that one of the duties of a chef is to feed the people; if a particular ingredient is introduced to a place, then it already belongs to that place. Thus, Asian spices are now part of Mexican ingredients, along with the tuba—the making of which was taught by Filipinos who had settled there.

Sarthou chose the pyanggang manuk of the Tausugs and the Maranao palapa. These dishes used flavor sauces such as the Tausug pamapa itum, a mix of spices that uses burnt coconut as well.