There is nothing–and everything–to do in Bhutan | Lifestyle.INQ ❮ ❯ 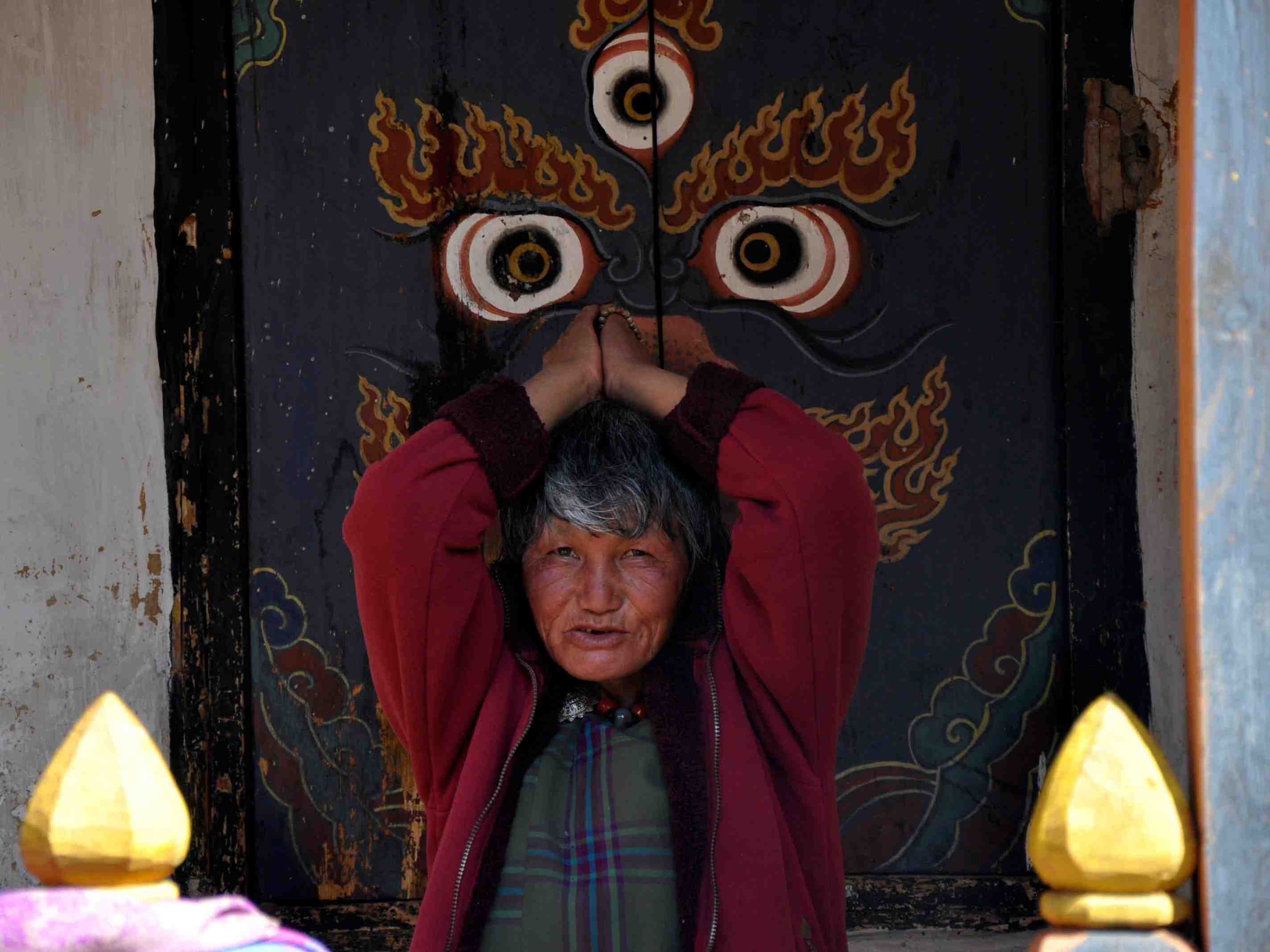 Why are you always in Bhutan?” a friend asked me, though I have been there only twice the past 12 months.

Considering it is one of the most exclusive travel destinations, I suppose visiting Bhutan even once is already a privilege.

A trip to this country requires commitment, planning and some saving up. But upon getting there, you experience a place with an unspoilt environment, culture and people.

One of the last countries to open its doors to tourism, Bhutan is a small kingdom, with a population of about 700,000. It sits in the Eastern Himalayan mountain range, flanked by the two most populated countries on Earth—China and India.

Bhutan was ruled by an absolute monarch until 2008 when it held its first democratic elections. The Prime Minister of Bhutan, Tshering Tobgay, recently gave a TED talk about his country’s holistic approach to development anchored on Gross National Happiness (GNH).

Tobgay announced to the world that Bhutan is not only a carbon neutral country, it is carbon negative—or free from harmful gases in the atmosphere.

Bhutan is marketed as the “Kingdom of Happiness.” This is not to be confused with the “Happiest Place on Earth,” otherwise known as Disneyland. Don’t expect to see Bhutanese people laughing and smiling all the time.

Bhutan has a unique concept for development. Instead of measuring only the Gross National Product (GNP), His Majesty the Fourth King of Bhutan, Jigme Singye Wangchuck, created the concept of GNH in the 1970s.

While the Bhutanese government and monarchy lead the country’s business affairs, they give equal importance to noneconomic aspects of well-being.

The government also adopted the concept of “High Value, Low Impact” tourism. This means no mass tourism, no budget travel deals, no big chain establishments for Bhutan. It’s not the kind of place where you can buy a plane ticket on a seat sale and just wing it when you get there.

For starters, you can be granted a visa only after you’ve bought a complete tour package from a licensed Bhutanese tour operator, like Amala Destinations.

The rationale is to protect Bhutan’s environment and culture. This is also why Bhutan is carbon negative. It may welcome less travelers, but these few visitors respect the land and its people.

The government requires every visitor to spend a minimum of $250 per day (or $200 per person per day in the leaner months of January, February, June, July, August and December). This rate covers hotel accommodation, meals, a licensed Bhutanese tour guide during your stay, internal transportation, tours, camping and trekking.

The tourism revenue provides all Bhutanese with free education and health services. Every Bhutanese farmer owns his land.

Bhutan is not a place you go to just on a whim. Even as brand ambassador of Amala Destinations, a Singapore-based boutique travel company specializing in Bhutan, I can neither simply tell you to add it to your travel list nor guarantee that you will love it there.

Bhutan is not for everyone. You have to want to go there, for your journey to make sense.

Bhutan has Buddhist temples, monasteries, mountains and valleys, but it is more than that. Unique and special, it is called the last Shangri-la for good reason. It is innocent and untouched. If you want to experience this pristine beauty, you must pay the price, not just with dollars, but with patience, time and a deeper understanding.

From Manila, you can fly to either Bangkok or Singapore and catch an early flight to Paro the next day, on Drukair or Bhutan Airlines.

Landing on the Paro airstrip is a story in itself, much like an Indiana Jones adventure with the plane weaving between mountain sides.

When the plane door opens, you are welcomed with that fresh Himalayan air, an unobstructed view of Paro valley, an airport that looks like a Bhutanese home, and people wearing the traditional costume.

During the brief walk from the plane to the arrival area, you immediately feel like you are in a different place, in a kingdom far, far, away. A giant billboard of a handsome king and a beautiful young queen greets you.

When people ask me what is there to do in Bhutan, I answer, “Nothing. In Bhutan, you just be.”

I am simplifying, of course. There are a lot of things to do in the town centers of Paro, Thimphu and Punakha.

You can shop for traditional wares such as handwoven yak wool blankets, silver and brass butter lamps and royal paraphernalia.

If adventure is your thing, there are beautiful hikes and treks through valleys and mountains. You can get nuggets of Buddhist wisdom from your tour guide and every monk you meet.

Or you could just throw away all expectations and let Bhutan reveal its beauty—one valley at a time.

A royal decree in 1998 mandated all buildings in Bhutan to be constructed in the traditional Bhutanese architecture, with a mud brick structure (or the appearance of it), either whitewashed or left as terra-cotta, multicolor wood cornices, small arched windows and sloping roofs.

Hotels and resorts have adopted this unique architectural style and translated it into their own.

On my trips, I had stayed in a local inn, a luxury lodge, a hip hotel, a forest lodge and a luxurious mountain resort. I highly suggest you get a range of different hotels to get a feel of the locality.

If total luxury is your aim, there are five Amankora lodges across Bhutan—in Paro, Thimphu, Punakha, Bumthang and Gangtey.

Getting from one valley to another is quite an adventure and sometimes a test of will. There is only one main highway—a one-lane meandering road that zigzags up, down and around mountains.

There are still unexplored mountains in Bhutan because the Bhutanese believe these are sacred sites. They will not be blasting mountains to make way for tunnels.

Bhutan has a strict environment stand and believes in protecting the country’s 72 percent of forest cover. On our second visit, King Jigme Khesar Namgyel Wangchuck celebrated the birth of his first son by committing to plant 108,000 trees across Bhutan.

Our first journey took us from Paro to Thimphu to Punakha and Gangtey and back. Though each valley had a dzong, a fortress that housed the administrative and monastic centers, each felt different from the last. The farther we went, the deeper we got into the Bhutanese way of life.

In Gangtey, we stayed at the luxurious Gangtey Goenpa Lodge with a sweeping view of the whole Phobjikha Valley. From there we started our trek down the valley to see the almost extinct black-necked cranes.

All new developments in Phobjikha Valley require the use of underground cable wires, to avoid disturbing the habitat of the cranes.

On our second trip, we went as far as Bumthang in Central Bhutan, an hour-long flight from Paro, with a few minutes’ stopover in Gelephu. Each flight took about 25 minutes across an incredible view of the Himalayan mountain tops.

We landed in an isolated airstrip with a small farmhouse-type structure that served as the Bumthang Airport. There was no luggage conveyor; our bags were delivered in the back of a pickup truck.

Our land journey back to Punakha took close to 10 hours with a stopover in Trongsa Dzong.

In Bumthang, we visited the Pema Choling Nunnery, where I met a beautiful female monk named Thujee Dolma.

Pema Choling is a monastic school hand-built by the nuns themselves in 2001 to fulfill the prophecy from the 15th century to make Tang Valley a center for learning for women.

Two years ago, Ee-Cheng Tseng, owner of Amala Destinations, raised funds from guests to have the nunnery’s kitchen constructed. The nuns are now able to cook more efficiently in an enclosed mud brick building, a big improvement from the previous small hut.

Punakha Valley was the capital of Bhutan from the 1600s to 1955. The Punakha Dzong houses the relic of Zhabdrung Ngawang Namgyal, a Tibetan lama considered the great unifier of Bhutan. This is where the King Jigme Khesar Namgyel Wangchuck and his fiancée, Jetsun Pema, were married in October 2011.

Punakha Dzong sits at the confluence of two rivers and is considered the most beautiful dzong in Bhutan.

On our visit in February 2015, we were in the same temple as model Karen Elson and the British Vogue team. The result was a beautiful spread by photographer Tim Walker that came out in May 2015.

I even accidentally walked into their shot as I got out of the temple’s golden doors, not knowing that Karen was on the other side draped in a dramatic red cape by Simone Rocha.

My second visit to Punakha Dzong just last February coincided with the tsechu, an annual Bhutanese religious festival where citizens come dressed in their finest traditional attire, the gho for men and kira for women. Monks come dressed in masks.

The locals commemorate their victory over an invading Tibetan army from the 17th century with a reenactment of that battle. It is a time for prayer and pilgrimage for the devout Buddhists. For visitors like me, it was a spectacular sight to behold—with the most colorful dances and costumes.

Paro Valley’s main attraction is Taktsang Goemba or Tiger’s Nest, the most famous site in Bhutan that appears on every bucket list. This is considered the most sacred site where Guru Rinpoche, an 8th-century Indian Buddhist master regarded as the Second Buddha, is said to have meditated for three years, three months, three weeks, three days and three hours.

The Tiger’s Nest monastery was built in 1692 on a cliff at 3,120 meters, or about 900 meters above Paro Valley. The only way to get there is to hike on foot or ride a horse halfway up. We hiked on foot all the way.

It took us a good two hours to reach the monastery and temples. I am not a mountaineer nor am I considered outdoorsy. This was my first big climb, in fact.

Our guide, Mani from Amala Destinations, advised us to walk in our own pace. As the local Bhutanese pilgrims walked past me in their slippers, my hiking shoe-clad feet took their own time moving. It was not a race; it was about the journey, I told myself.

When we reached the peak where we had an eye-level view of Tiger’s Nest with a steep ravine separating us, I was overwhelmed with the feeling of gratitude that I couldn’t hold back my tears.

The hike was difficult for a novice like me. It was a personal accomplishment that I got that far and entered the sacred temples. I was humbled by the gift of seeing such a beautiful place. And much like everything else in Bhutan—getting to the faraway valleys, wearing the kira, eating chili cheese—it takes work and time and perseverance before the true beauty of the people and the place is revealed to you.

This is a small price to pay for experiencing the last Shangri-la.