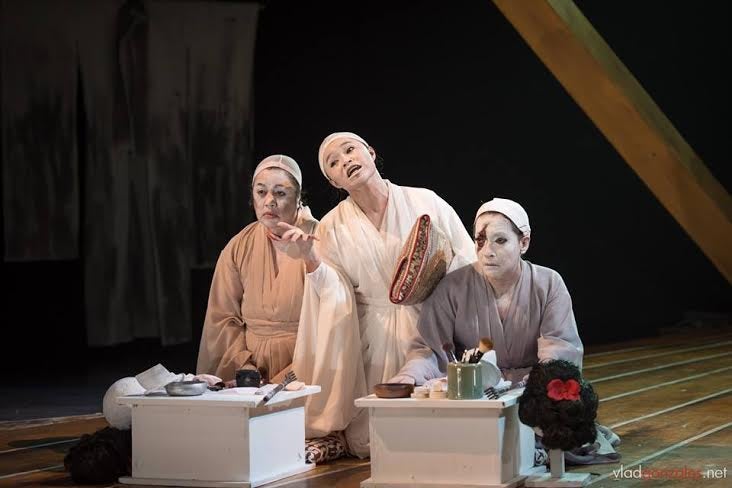 Ces Quesada, Marynor Madamesila and Frances Makil-Ignacio in a scene from “The Dressing Room: That Which Flows Away Ultimately Becomes Nostalgia,” directed by Alexander Cortez. PHOTO BY VLADIMEIR GONZALES

Perhaps no other kind of play demands the audience’s undivided attention than that which can be described as a “waiting game” (not a formal category, but something raised here for comparison purposes).

The best examples are existentialist dramas like “Waiting for Godot” and “No Exit,” where a handful of actors ponderously discuss the issues of life in a closed set that rarely sees any action. For all the challenges that Shakespeare presents to his modern viewers, at least his plays contains battles, balcony courtships and crimes of passion.

But idea plays—consisting mostly of dialogue and their subtext—demand that you keep your eyes and ears glued to the stage all throughout. That critical “aha” line of dialogue that may reveal the meaning of the entire thing can literally happen in a blink-or-you-miss-it moment. And there may even be more than just one meaning.

Take the case of Dulaang UP’s “The Dressing Room: That Which Flows Away Ultimately Becomes Nostalgia.” This production, directed by Alexander Cortez, is based on Chiori Miyagawa’s adaptation of John K. Gillespie’s English translation of the original Japanese script by Shimizu Kunio.

The 90-minute, no-intermission play has samurai warriors, ghosts and sundry other denizens lending action to some scenes—but the overall effect is still a becalmed timelessness, as if nothing seems be happening on stage.

The titular dressing room is inhabited by two actresses well past their prime, Actress A (Frances Makil-Ignacio) and Actress B (Ces Quesada). The two ladies spend their every waking hour in that small room, putting on makeup, rehearsing lines long forgotten, and reminiscing about past glories.

They complain that they have been reduced to the role of line prompters in the wings for other actors; they behave as if eternally waiting for their cue to finally emerge out of the wings and onto center stage.

Two other performers flit in and out, fighting to steal their thunder: Actress C (Missy Maramara), a working thespian whose popularity appears to be in decline; and Actress D (Marynor Madamesila, alternating with Maxine Ignacio), an ambitious newbie with guts that far outweigh her talent.

If the kabuki-masked Actresses A and B obsess about the past, Actresses C and D are bent on achieving theatrical glory by playing the part of Nina, the pivotal character in Anton Chekhov’s “The Seagull.”

What ensues is a melee that can only be mustered by artists who have dedicated their lives to mastering and commanding from memory their own interpretations of roles like Nina, Lady Macbeth and other iconic characters from the theater canon.

The face-off becomes an intellectual fencing match where only the strong survive. As hearts are rendered open bit by bit, the mystery unravels. Actresses A and B, who appear to be longtime colleagues, seem to inhabit a different dimension, if not theatrical eras, while Actresses C and D are from a more contemporary form of theater that may itself be on the wane.

The audience gets to see a hint of the cultural tension the playwright is trying to resolve through his characters’ eyes. The play was said to have been written at a time when the Japanese were coping with change, their ancient traditions clashing with modern Western influences.

That contradiction is embodied in the four actresses, who are garbed in traditional Japanese costumes and makeup but are comfortable quoting Beckett, the Bard and other European playwrights with the same passion and reverence with which they evoke their own theatrical conventions.

But transcending this struggle for cultural rootedness is a more down-to-earth desire by the four characters: to cement their immortality on stage.

They actually manage to win, at least in this particular show, as the actresses who play them deliver performances that etch themselves in your memories.

Quesada and Makil-Ignacio are unparalleled as the two has-been performers, commanding every inch of that ghastly dressing room. Their belaboring of the theater they had once known makes for thought-provoking moments, and their reenactments of old or untried roles to quash hidden pains are simply glorious.

The two are like a veteran team of tennis players—instinctively complementing each other’s hand, shining as individuals whenever needed while never overshadowing the other.

Maramara, meanwhile, blazes on stage, as is intended for her larger-than-life character. The calculated exaggeration in her every gesture is meant not only to keep the two older doyennes in their place but also to keep the audience’s attention fixed on her.

But as Maramara plays the character, it’s clear that underneath all that vanity is an all-too-real vulnerability anguishing at the thought that she just might end up following the footsteps of her two forebears.

As the newbie Actress D, Madamesila stumbles at first, and fights to keep afloat in the presence of the more senior actresses. At the end of the play, she does manage to transform from a mousy pretender to a team (or ensemble) player who is all too willing to follow Actresses A and B into their own kind of loony bin.

What passes for the resolution at the play’s end is achieved by her belated blending with Quesada and Makil-Ignacio.

But is there indeed a resolution?

The questions the play summons keep the audience engaged and guessing to the end—and the performances of the real-life actors playing this intriguing waiting game make the journey worth it.