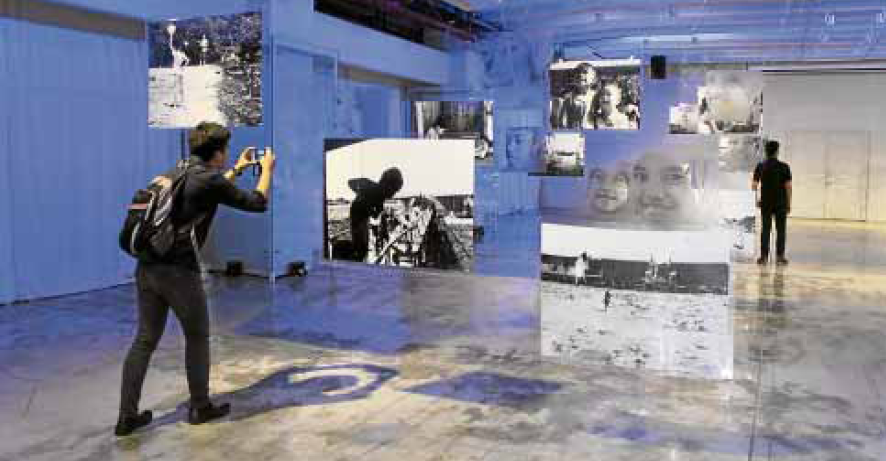 HOPE abounds in a transitory site where young people, although poor and displaced, learn the finer points of art in a program that covers film, visual arts, puppetry and photography.

Some of the beginners’ works were brought to life in an exhibit called “Sugpat: Stories of Permanence in Transience,” which showcases photographs taken by out-of-school youths of the Masepla transitory site in Mampang, Zamboanga City, showing the conditions of internally displaced people  after the 2013 Zamboanga siege.

Curated by photography and multimedia art teacher Ralph Eya, the photographs were on display at Soma Space, Green Sun Hotel on Chino Roces Avenue Extension in Makati from April 11 to 22.

“These photos deserve to be brought to Manila so a different audience can witness the stories,” said Eya, a community-based artist. “The experience (of sharing what you know to the youth) itself changes you as a person. Going to a place of less fortunate people while having the notion that you are a developed person who tells them what to do, it is surprising to realize that you yourself can learn from them. Learning is indeed a two-way process.”

“Sugpat” is a term used in Zamboanga Peninsula which means connect or join.

The idea of arts for development and the Sugpat program were initiated by Ateneo de Zamboanga University Center for Culture and the Arts director Kiko Miranda. The photography workshop was facilitated by Eya and the Sugpat team.

“It was a collaborative work of community development workers, artists and the academe. The process of teaching the 25 to 30 participating Masepla youth storytelling through photography lasted for five days in October last year,” Eya shared.

Masepla is an underdeveloped community confronted by problems in water supply, sanitation, ventilation and high temperature.

It embraces around 4,700 displaced people coming from different tribes and cultures such as the Badjao, Yakan, Tausug, Sama, Maranao and Bisaya. This is why intercultural relationships also pose as a challenge.

Eya and youth participant Naira Sawadjaan opened the exhibit with a talk on how the Masepla youth was empowered through Sugpat.

“The pictures that you see can show how we, the Masepla youth, are still capable of being happy,” Sawadjaan told the audience in Filipino.

“The context of the exhibit was delivered well in our launching,” Eya told the Inquirer. “The audience couldn’t believe that the photos were taken by these young people. Everyone was interested about the creative process that we did. As an artist, I had to unlearn and think of different ways to communicate effectively with younger people.”

The Sugpat program and exhibition, including the equipment used to take the photos, were made possible through the support of the United Nations Children’s Emergency Fund, Green Sun Hotel and Ateneo de Zamboanga University. The proceeds from the sale of the works will be for the continuity of the Sugpat program and for the Masepla youth.

Also on exhibit were semitransparent portraits of the Masepla youth artists taken by Eya, with their works at the back of their images.

Among the photos taken by the Masepla youth were scenes of young people playing basketball, a child and a father inside a stilt house, neighbors chatting and children playing, curious about their surroundings.

“The photos do not give a depressing aura, although they are in black and white,” Eya said, noting the feedback he received. “They are raw stories from the eyes of young people and they are signs of moving on.”

Jay Asarani, a participant in the Sugpat program, said during the last day of the photography workshop: “I hope it’s always like this—peaceful, no divisions between Muslims, Christians, Tausugs and Badjaos because all of us are human beings.”

“What Jay said made many of us cry,” Eya said. “I wouldn’t forget that.”

Hadaya Basa, another program participant, took a photo of a classroom to represent her dream of going back to school. Being a small girl, she lowered her camera to get the desired angle and captured the chalkboard. She was unable to continue her studies because of the Zamboanga siege.

“One of the best things I could ever dream of is seeing my students surpass my capabilities, and this was achieved through the Sugpat program,” Eya said.

The photography workshop and the Sugpat program will not end with the exhibit. The organizers are considering many possibilities in enhancing the program, such as compiling outputs into a book and teaching the participants how to pass on what they know.

“We also plan to have the exhibit in other venues or galleries,” Eya said.