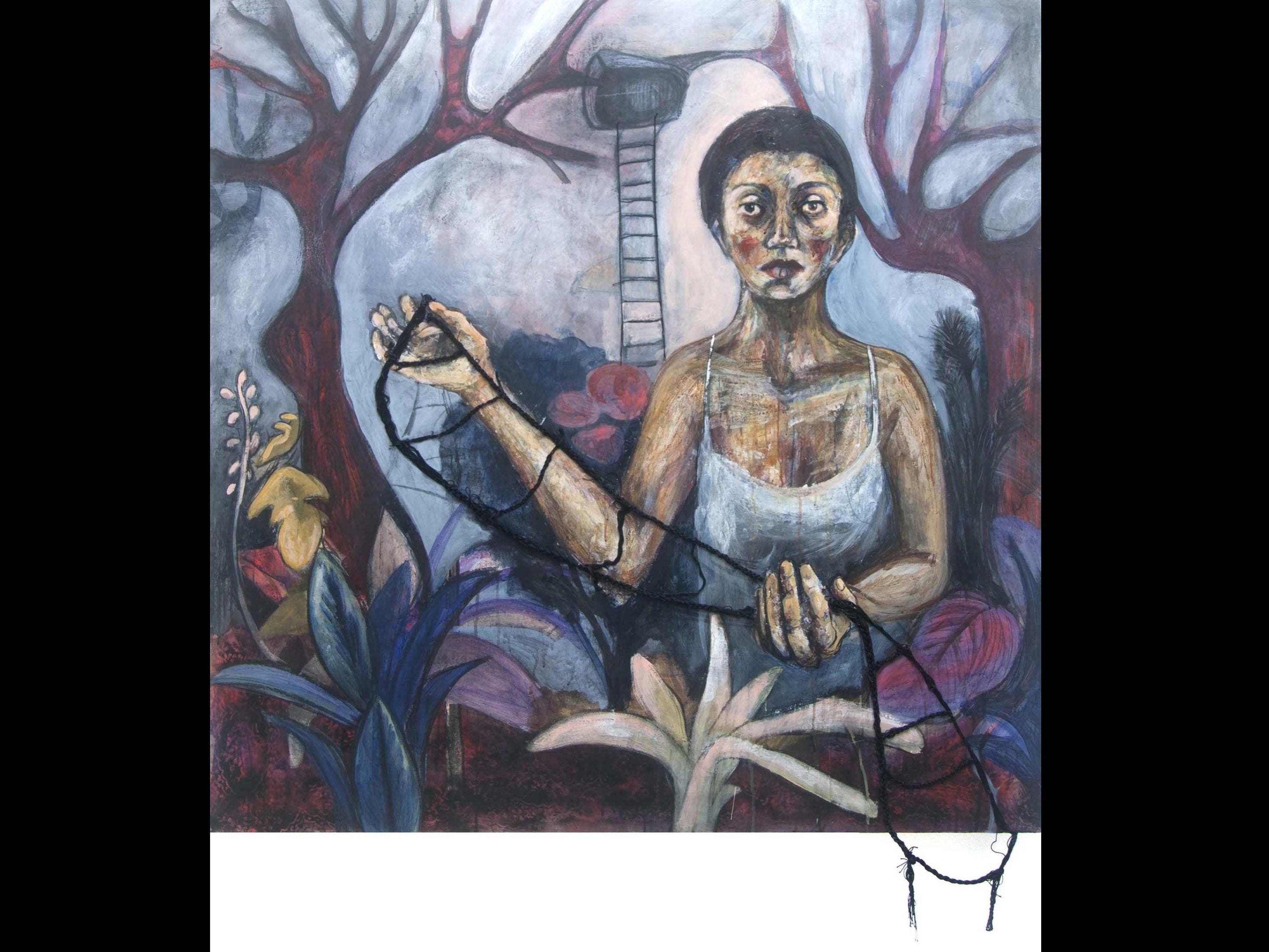 There are a multitude of things flying and colliding in Dubai-based Syrian artist Noor Bahjat’s head that, if manifested as tangible bursts of pigment, patches of light or plaits and knits of intertwined color, her mind will resemble a riotous, vivid patchwork of endless quilt.

Throughout these musings the 24-year-old artist ultimately concludes that there are only two perpetual, all-encompassing truths in this world: love and death.

“Which One Is Your Thread?” is Bahjat’s first exhibition here in the Philippines—the culmination of a three-month-long residency in Manila—and projected on her canvas are these truths as articulated in a vivid, expressionistic aesthetic. Expressive daubs and strokes of paint offer poignant musings and the most contemplative of gazes.

Her works are visually relayed by big, knowingly expressive eyes that manage to appear paradoxically glazed, yet penetrating as they hold and sustain you in a strange and hypnotic suspension.

Born and raised in Syria, her homeland’s current political climate necessitated her family’s departure five years ago for the glimmering desert emirate of Dubai. Since February, she has found herself embedded in the middle of the colorful megalopolis that is Manila, sometimes surrounded by oceans, but always by spectral contradictions and feverish contrasts.

“One of the very first things I saw in this country was how huge the gap between the rich and the poor is,” she explains.

Bahjat paints a disquieting portrait of this searing observation in one of her paintings, a diptych with a contemplative woman, placed right at the very center of its middle edge. Bahjat uses the twin panels of the diptych to paint a portrait of a woman living two parallel yet starkly different lives.

The woman personifies our kasambahay—kasama sa bahay—the one who lives with us in our homes. One of her halves resides in a stately house, the other rides a jeepney—perhaps taking it to return to her own home. There are two inextricably intertwined—yet somehow irreconcilable—strands to the thread of her life. She is a link and conduit between these two worlds, two parallel lives running together.

It can be said that no one is exempt from this system—we actively participate in it as we employ and are likewise employed in one way or another.

Since arriving in Manila, Bahjat has learned to take her time. The artist is a ball of frenetic energy, and admits to being so.

“It’s more real here,” she says of her newfound independence. “I no longer just look at things, I take my time.”

One would have to agree—it takes a certain kind of sensitivity to distinguish mere looking from actual seeing. Flora and natural forms populate the body of work she has completed during her residency in Manila.

It is a small, albeit symbolically significant, departure from her older work. There are shades of blush and other diluted colors that temper and work with the potency of the subject matter. It is this kind of balance that she has vigilantly labored on and painstakingly tried to earn for the past three months—to effectuate an equilibrium of sorts, not only in artistic creation, but in the whole sphere of life and living as well.

Her observational skills have enabled her to not only position herself in this world of linkages, but to question that very position as well. Privilege, duty, hope, dream and desire, war and peace—to the artist, they all exist as a state of mind to be expressed.

Bahjat’s work allows us to confront with the paradox of isolation in the midst of increasing connectivity. It is in this intricately veined, strung and threaded network of subliminal messages, force-fed information, and mental conditioning that we are reminded of George Orwell’s prophetic novel, “1984,” as the fulfillment of its forewarning. That world of the novel is here, and is now. Bahjat, aware of the changes of these times, declares thus: “I refuse to be brainwashed. I want to live my life as nature intended me to.”