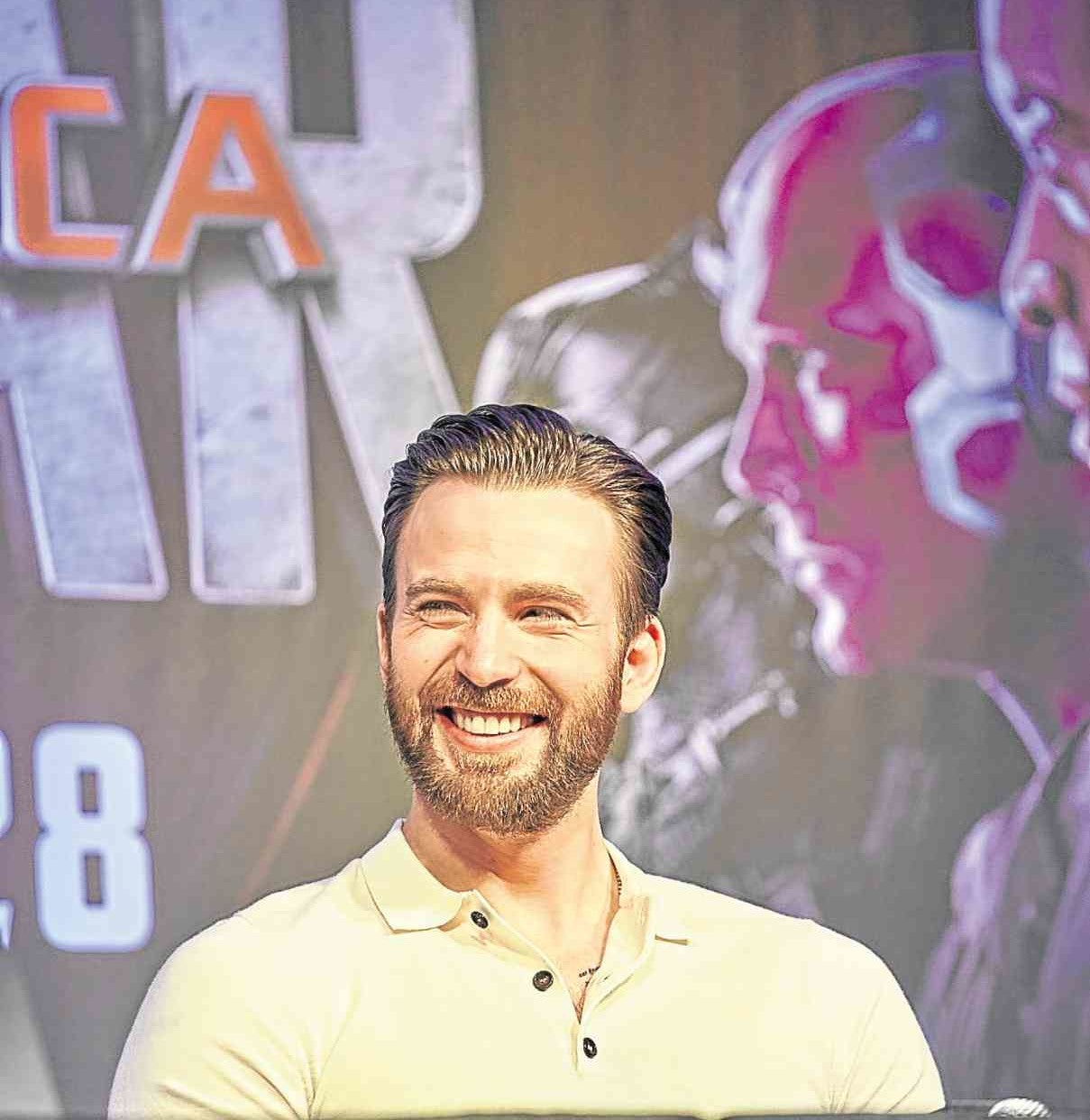 IT’S BEEN five years since Chris Evans first played the lead in 2011’s “Captain America: The First Avenger.” Now that he’s appearing on his fifth feature-film as the patriotic super-soldier, he never forgets just how iconic a part he’s playing.

The muscular, square-jawed, bearded Evans, 34, recalls what Marvel mastermind Stan Lee keeps telling him when they see each other: “Don’t forget you’re Captain America. Don’t forget that’s how the fans see you.”

But it isn’t as easy at it seems.

“Captain America is a very internal man. He keeps things close to the chest. That’s not my nature. I’m more of an open book,” Evan explains. “Playing him the way he’s written, he’s certainly a very selfless man. When you want to have drama on film, you want conflict and uncertainty. And he doesn’t have that. It’s been a challenge. I’d love to see him funny and witty, but that’s not who he is.”

Then there is the challenge of living up to Captain America as a person: “I play someone who is the epitome of having a moral compass. You hope to live up to the character. There’s no way for me to embody the character completely.”

Evans has clearly moved away from cookie-cutter leading men stuff, and he says the action scenes he’s done aren’t the big obstacle.

“The action scenes are physically demanding, but a lot harder are the emotional scenes. The emotional moments are up to you. It’s a combination of fun, with a little fear, even to the point of being terrified,” he says.

Staying in shape to bring to life a fictional comic book hero doesn’t require an arcane formula: “There is no secret workout or diet. It doesn’t really work. You pick stuff up. You put it down. You do that until you can’t do it anymore. You get big. It’s real simple.”

All this is interesting, since Evans wasn’t the big comic fan boy prior to doing movies. “The first comic book I read was ‘Fantastic Four’ because I did the movie in 2005,” he says, having played the Human Torch in that film and its sequel, 2007’s “Fantastic Four: The Rise of the Silver Surfer.”

Asked about the withering reception the “Fantastic Four” reboot received, Evans smiles and says, “I’m just surprised ours turned out to be the good one.”

Evans now topbills both the “Captain America” and “The Avengers” films. While pointing out that the characters are good friends, Evans says there’s also a reason why Iron Man and Captain America can come to blows: “Tony Stark is the guy who’s really gotten underneath Captain America’s skin.”

Evans has been busy doing other stuff, like directing his first film, “Before We Go,” (he also starred in and produced it). It’s something he has always wanted to do and intends to pursue in the future.

He’s still much in demand as an actor and will be seen in the upcoming film “Gifted,” and, of course, “The Avengers: Infinity War.”

In the meantime, he has his hands full being Captain America for the world, and Evans takes it seriously. “Playing the role has an impact on people,” he says. “It’s part of the challenge and the joy of playing that character. Ruel S. De Vera