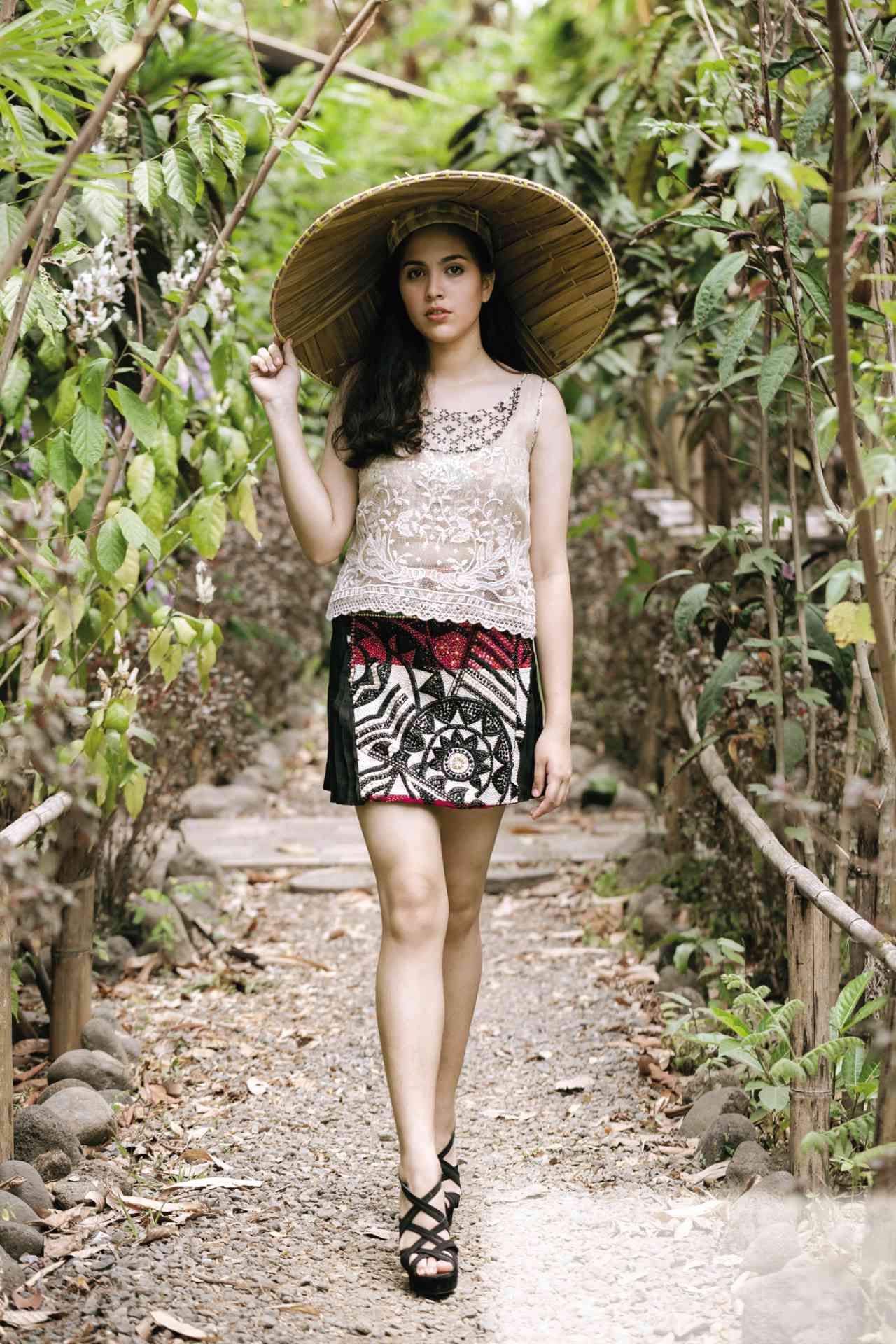 PIÑA seda camison with the signature Lumban callado is teamed with a langkit Maranaw miniskirt.

Designer Beatriz “Patis” Tesoro takes ethnic diversity and costume tradition to another level by patching them up, quite literally, in her fashion.

This May, she will again hold another exhibit and fashion show at Museo Nacional de Antropologia in Madrid, which houses an extensive collection of Philippine artifacts and antiques. Organized by the Philippine Embassy in Spain and the Spanish Ministry of Education, Culture and Sports,  “Ang Pagbabalik, Tejidos de Piña Filipinos entre Tradicion y Vanguardia,” will present Tesoro’s updates on piña as set against the anthropological museum’s vast collection of antique piña.

For this show, Tesoro’s piña tapestries will reflect how the fabric has evolved. The exhibit will include a photographic essay  on how the fabric is produced, from the planting to the finished product.

“Today, piña is mixed with silk. Aside from hand embroidery, it can be done by machine,” says Tesoro. “In the Spanish times, embroidery was the only embellishment. Now we can do hand-painting, weaving, appliqué and other hand techniques. But the quality of the piña has changed. My theory is, the soil from which the fiber grows was richer.”

She has also been getting inspiration from the fabrics of far-flung ethnic groups such as the malong and langkit, the geometric strips of cotton fabric from the Maranaws; the patadyong, or striped and checked fabrics from Miag-ao, Iloilo; the animistic designs of the Tinggians from Abra; and the floral embroidery from the manangs in Lumban.

The exhibit will include a 25-piece collection of clothes, which not only includes piña formals but also appliqués of these ethnic handwoven fibers interpreted in minis, short shifts, jackets and palazzo pants.

For Tesoro, a bandeau is wrought with beadwork, hand-painted patterns and embossed embroidered appliqués. It goes with a miniskirt of piña seda material with hand-painted Tinggian patterns embroidered in gold thread. Then again, the appliquéd malong made of hand-loom cotton from Cotabato looks en vogue when rendered in a short shift dress.

“I mix handwoven fabrics, sometimes with the piña,” she points out. “I make clothes that are easy and appealing to the young generation. We want people to keep buying so that our traditions don’t die out.”

Tesoro is known for using ethnic fabrics and weaving techniques in a modern context. Her clothes are a dialogue on keeping a cultural tradition alive to take the millennials back to the past, while merging the concept of Western fashion ever-evolving.

She says innovation is important in order to keep traditions alive. The geometric patterns from Tinggian embroidery are seen in delicate piña tops. “I want to show the world that we still have our tradition such as the terno, but I will show how it is worn today. The modern piña is not dead as a dodo, but it’s alive because of the revival of the weaving industry,” says Tesoro.