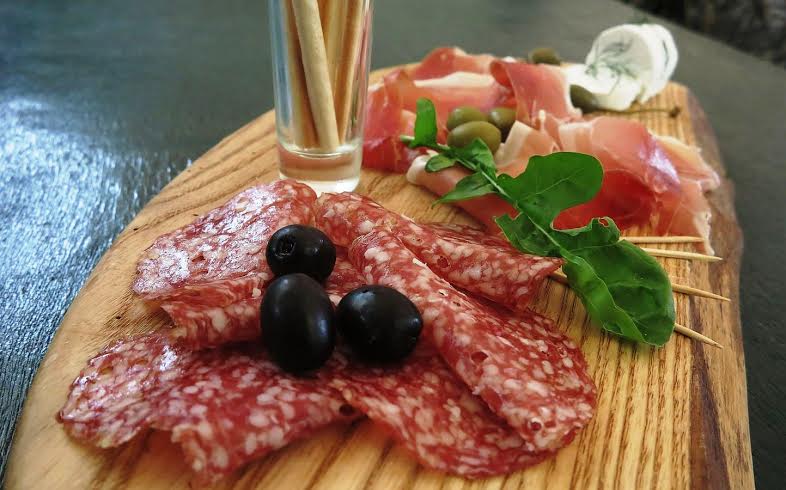 APERITIF of Salami, Prosciutto and Goat’s Cheese. PHOTOS BY PHOTOS BY EV ESPIRITU

Only Therese Jison of Mother’s Garden in Fairview, Quezon Hill, Baguio, could prepare a plate of appetizers and say of the goat cheese that was cut into cubes: “The milk comes from a millionaire friend in Forbes Park whose hobby is raising goats and sheep.”

Her expression was casual and tone matter-of-fact, but the image of the millionaire in a palatial home surrounded by bleating sheep and baaa-ing goats was indeed laughable.

For the remainder of this long hot summer, Jison is offering light grilled food in her reopened garden-restaurant. The charcoal she uses isn’t even bought from the market. It is made from the twigs and branches cut from mango trees and appreciated for the scent once lit. She had portable clay grillers made-to-order in Vigan, Ilocos Sur.

She got the idea for her summer fare of beef yakiniku, pork yakitori and chicken teriyaki from Torigin in Tokyo—a restaurant famed for its grilled food. “Grilled is healthier and lighter,” she pointed out.

Her place was closed from July 2015 to March 9 this year. It reopened last month in low-key fashion. “We went through a big metamorphosis because the typhoon hit us hard,” she recalled. “I renamed the fine-dining area from Panoramic Café to Mamma Mia, after my mother and the musical.”

Every year she goes to Europe to study trends in culinary techniques and restaurant operations. She noted that in the Philippines, “everybody wants to put up a restaurant, even taxi drivers, but they don’t know how the actual operation is done, which is very scientific and aware of costs, including COGS (costs of goods sold) and the price of all ingredients.”

In order to learn more about it, she went to Provence, France, and stayed with a family that ran a small restaurant. Asked why learn with a family instead of a culinary school, she answered: “They cook better food in little restaurants.”

The family she lived with was capable of catering to a maximum of 100 people. She shopped with them at the local market and vineyards. In Berlin, Germany, she went to prearranged meetings in hotels and restaurants.

“I like to make my own curriculum and to plan what I want to learn,” Jison explained.

The garden-restaurant is also known as a family place with a children’s playground that the owner has moved away from the dining areas, so noisy children do not disturb the adults who want to quietly eat.

The playground is not too far from the pens of the mini chickens, the rabbits, Hansel the sheep and Michelle the pig whom the children can feed with lettuce.

Jison put up the Tea Room, a private nook that serves merienda or high tea. It is where lovers meet or where proposals of marriage are made while sipping a tarragon infusion, green tea or Benguet coffee.

Merienda staples are palitaw, leche flan and suman. The high tea menu consists of cucumber sandwiches, biscuits and little moist chocolate cakes with chocolate icing and strawberries. There is a Tea Terrace where the tea leaves are snipped from.

Mother’s Garden practices sustainable farming on a small scale. “Except for the whole corn, we feed ourselves and our customers with our own vegetables,” said Jison. “Even our pork is from our garden’s piggery. The beef is from Nueva Ecija where we contracted some farmers to take care of cows. When they reach 13 months of age, they are ‘harvested’ so the meat is soft.”

She makes a pitch for Perla soap, which is used for washing the entire compound. “Because of it we can recycle the water and use it for watering the plants. We trap rainwater from each terrace. There are cisterns to keep the water during this El Niño phenomenon.”

She is saddened that a big part of Baguio has turned to fast food for sustenance. “I’m applying what I studied, and when chefs from abroad or Manila come up here, they’re surprised that Baguio has produced a restaurant that can really cook. When chefs eat out, they don’t order from a menu. It’s ‘Show us! Cook for us!’”

She recalled a Swiss chef who bought a basketful of okras from the Baguio public market because he was fascinated with them. Through the Waze app, he was able to navigate his way to Mother’s Garden. Once on Jison’s doorstep, he told her, “Cook these for me.”

She brought out her cast-iron skillet and rubbed a stick of butter on it while it heated over a stove. She used nothing else but sugar and salt to season the okra. Then she covered the skillet, shook it, then served the vegetables hot. The Swiss chef ate heartily and suspiciously asked her, “Did you put MSG into this?”

To her it meant that the dish was delicious and authentic.