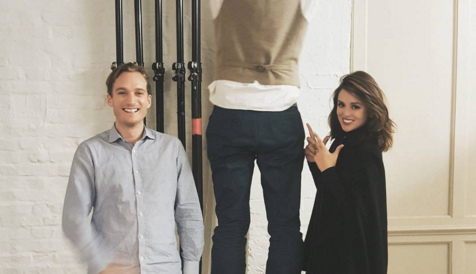 Keeping up with the Burnands👪

The Burnands formally welcomed Wilson to their family at the grand Queen Anne-styled Hotel du Vin in Winchester, Hampshire. Wilson was seen wearing a Marchesa gown for her “despedida de soltera.”

Her fiancé is a businessman who owns a socks company based in the UK.

The Last of Miss Wilson’s ‘GEORGEousness’

For the last time as single, Wilson flaunted her ‘GEORGEousness’ in the cover of Preview magazine’s May issue, subtitled “You’ve seen the last of Miss Wilson.”

In the post of the page of the said mag in Instagram on Saturday, Georgina shared us ‘her serendipitous love story’ and why she thinks ‘getting married won’t slow her down.’

This post gained speculations from netizens for a day about her wedding with her fiancé, until her friends posted photos in Instagram. Then again, rumors have been circulating in the web these past months.

Georgina’s close celebrity friends flew to London early this week, which raised curiosity among netizens about her getting married. Among them were Solenn Heussaff with fiancé Nico Bolzico, Tim Yap, Anne Curtis and sister Jasmine.

“We may say bad things about each other, but never agree,” said George’s cousin, Isabelle, in Tim Yap’s Instagram post, as she gave a heartfelt message.

“Welcome to the family, Arthur,” she finally said.

First among the ‘It Girls’

Solenn will the knot with her fiancé Nico in December. Now, Wilson will be the first among the ‘It Girls’ to plunge into married life.

Solenn and Nico proclaimed their month of wedding late last year in an engagement, which was celebrated in Argentina.

Her cousin Isabelle and her French fiancé Adrien Semblat got engaged during a trip to Turkey and set to marry in December this year in Tuscany, Italy.

Too sudden to marry?

Netizens were shocked about her whirlwind wedding. It was just two years after her breakup with Borgy Manotoc, her boyfriend of four years.

In an interview on the late-night talk show “Aquino and Abunda” in 2014, she explained: “When a breakup comes from ‘it’s-not-the-loss-of-love’ and ‘it’s-not-that-you-guys-aren’t-meant-to-be-together’.

“But it is just life’s circumstances don’t work in the right way at that point in time,” she added. Gwen Stephanie Calabucal, Aljon Tugaoen/INQUIRER.net trainees/TVJ

How do you solve a problem like Georgina Wilson?