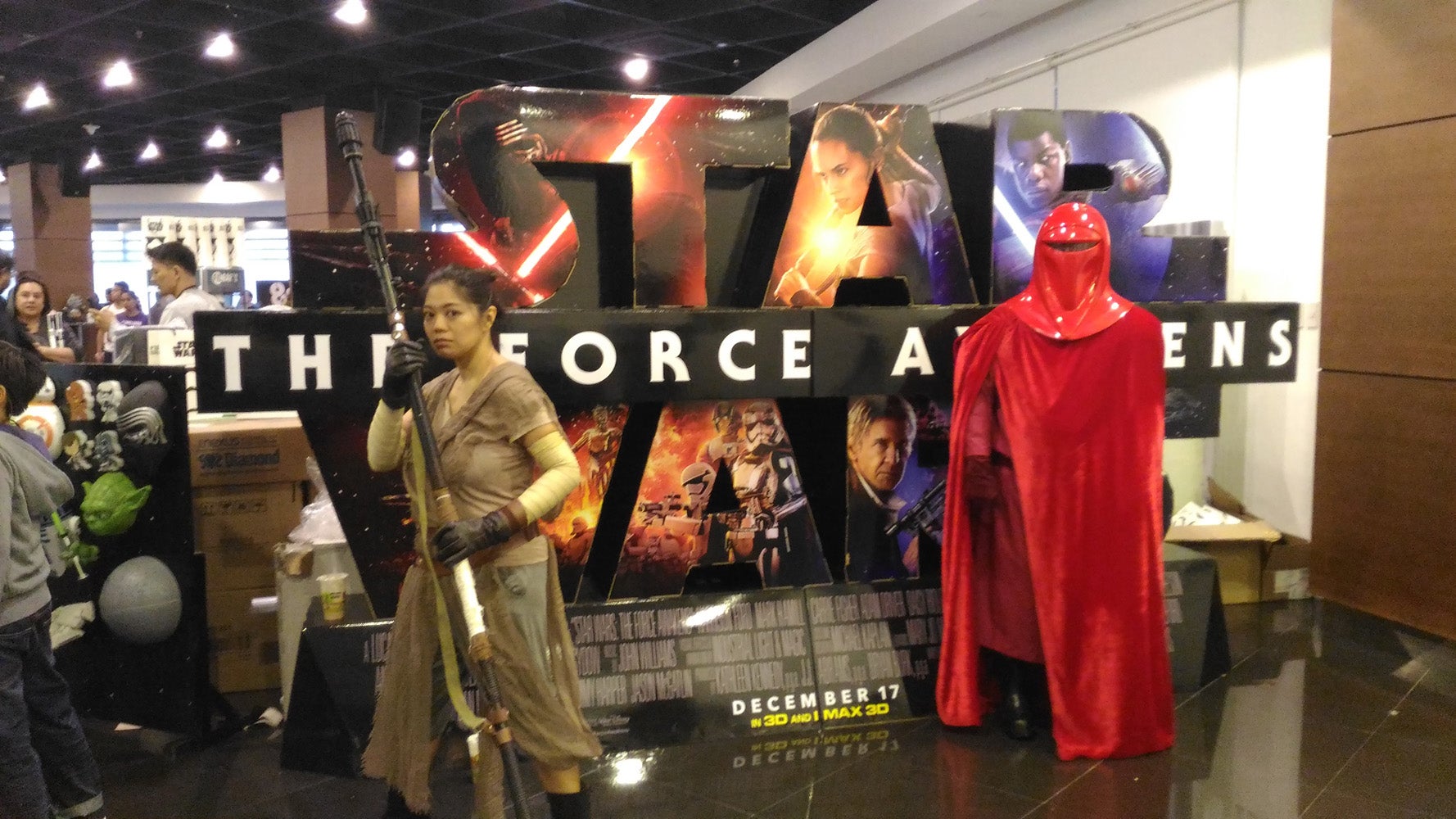 STRIKING a pose with another cosplayer

The fan awakens: From trooper to scavenger

I’ve  been a “Star Wars” fan all my life. I was 5 years old, and we had just moved to Riyadh, Saudi Arabia, when my dad made me watch the movies. It was through “Star Wars” that I met my husband, Oneal, and of course we had a “Star Wars” wedding. Pretty much all of our family and friends were super excited about “Episode VII.”

“Star Wars” fans are a pretty diverse bunch, and we all have different ways of celebrating our love for the space opera.

Oneal and I make and wear costumes, and that’s why we joined the 501st Legion, an international “Star Wars” fan club. We dress up as the bad guys and girls from all over the galaxy.

Our costumes of choice are suits of armor. Oneal has Stormtrooper armor, and I have a biker scout costume. And we have his and hers fiberglass clone trooper costumes, too!

For “The Force Awakens” however, it wasn’t the Dark Side that beckoned. Instead, we decided on some good guys!

So I decided to dress up as Rey for the opening of “The Force Awakens.” But there was more to my decision. I kept thinking, “OMG, there’s a girl who’s a lead character in a ‘Star Wars’ movie!” I was so curious about this girl who grew up in the desert, just like me. Who was she?

Whatever costume we build, we do a lot of research. We spent so much time going over the trailer and any pictures that popped up online. The problem is that you don’t know exactly what you’re going to see in the movie. Another challenge was the fact that this costume was mostly fabric.

Fortunately, Oneal figured out the sewing machine, and he took care of all the stitching that couldn’t be done by hand.

This whole time, Oneal worked on a new costume, too: Poe Dameron!

It was 2 a.m. on Sunday in December when we finished the costume, and we had to go to a “Star Wars” exhibit at a nearby mall at 10 a.m. That week, we had about six events lined up, and we planned to wear our new costumes to all of them.

It was a little strange to be wearing cloth costumes after years of armor. And when we went out in front of the crowd, we didn’t have helmets! I actually needed to spend time on hair and makeup to complete my look. And because people could see our faces, we couldn’t our usual goofy selves!

I hoped against hope that people would recognize me, and they did! People even asked how I made my costume. At the various events, I saw other girls of all ages dressed as Rey, too. We all sort of waved happily at each other and posed for pictures together.

That week we saw the movie three times, and each time I cried with joy that I was seeing a “Star Wars” movie again. I cheered when Han and Chewie appeared, and when Rey expertly piloted the Millennium Falcon. My heart swelled as I saw Leia in charge of yet another rebel base.

I was also happy for all the kids who were going to see “Star Wars” on the big screen for the first time. And I rejoiced because these kids were growing up knowing “Star Wars” is for everyone: girls, boys of all ages, shapes and sizes, droid or alien, wherever they are in the world.

“The Force Awakens” had a lot of heart, humor and excitement, and it was more than enough for this lifelong fan. If “Rogue One” and “Episode VIII” can be half as fun, I’m happy!