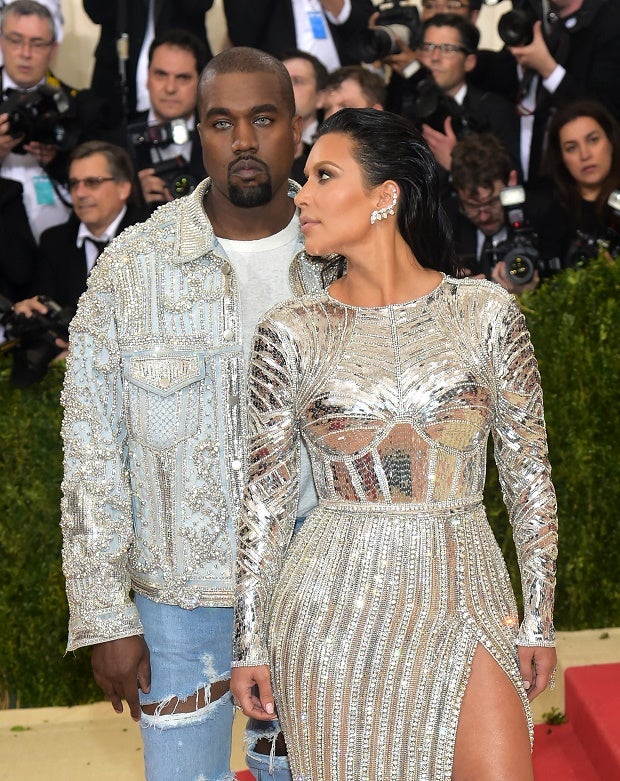 Kanye West, left, and Kim Kardashian arrive at The Metropolitan Museum of Art Costume Institute Benefit Gala, celebrating the opening of "Manus x Machina: Fashion in an Age of Technology" on Monday, May 2, 2016, in New York. AP

NEW YORK — They came as robots and gladiators, light-up princesses and high-haired goddesses shimmering in green, copper and silver.

As predicted, the annual parade of fashion and star power at the Met Gala on Monday night included an array of interpretations on the evening’s vibe: “Manus x Machina: Fashion in an Age of Technology.”

That’s the name of an exhibit opening Thursday that set the tone for the star-studded evening that raises millions for the Metropolitan Museum of Art each year. This time around, the idea was to explore the convergence of handmade and machine-made elements in fashion, past, present and future.

Some highlights from this year’s Met Gala:

Technology, thanks to Marchesa and IBM, wired up the buzz for a dainty gown with ombre-painted flowers worn by Karolina Kurkova. It was a dusty blue tulle and the flowers were outfitted with 150 LED lights that changed colors, based on a “cognitive” analysis of the brand’s color palette. The geeks correlated data from hundreds of images of Marchesa gowns with and related social media sentiment in a show of how technology can enhance the human imagination.

Besides, Kurkova said, her battery pack kept her warm.

Claire Danes also lit up in a pale blue, thanks to a wired-up dress Zac Posen has been teasing for days on social media.

Looking at you Lady Gaga, and your ribbed bodysuit from Versace. And, of course, your towering platform shoes and metallic silver jacket. And looking at you Katy Perry, and your black velvet Prada gown with the gold embellishment that looked like it could hurt someone. Oh, and your black helmet hair and little Tamagotchi digital pet you called your “tech element.”

Other ragers: Madonna exposed her bum and Nicki Minaj looked all fierce and sexy in a strappy, sparkly black number with lots of buckles designed by her date, Jeremy Scott. He wore an exoskeleton suit of sparkles.

Idris Elba, a gala co-host, takes the nobody-wears-a-tuxedo-and-tails better award. All he had to do was stand there and radiate. And by radiate we mean, on those levels he does best: suave, sexy, debonair.

Zayn Malik and the silver metal arms on his dark suit appeared to channel the Winter Soldier, as in the movie “Captain America: The Winter Soldier.” Or a droid. Take your pick. He escorted Gigi Hadid.

Jared Leto wore a custom Gucci white tailcoat with a white evening shirt and white bowtie, completing his look with a hand-carved black lacquer cane with a silver and crystal embellished cat head detail. He also had Florence Welch, in Gucci, as his date.

Emily Blunt and Olivia Wilde — and their bumps — posed together on the carpet. Both wore their hair tight and back, Blunt in a custom sapphire sequin-embroidered lace gown from Michael Kors and Wilde also in Kors but a custom black stone-embroidered column look with a metallic collar halter.

Kerry Washington was one sexy mama as she cradled her smaller bump in a sleeveless black lace gown with a plunging V-neck and sexy slit. She wore long sheer gloves, all courtesy of Marc Jacobs. And she rocked purple hair!

Taylor Swift, also a co-host of the gala, went full-on gladiator to go with her fierce new tousled platinum locks. Her black sandals laced up to just below the knee, paired with a Louis Vuitton silver, sparkly mini that had ruffled tiers at the bottom and cutouts on the sides, all topped off with an ultra-dark lip shade.

Who else evoked Roman stadium fighters of old? Alicia Vikander, also in metallic Vuitton but hers with a bright red bustier to go with copper, black and white skirting and chunky heeled combat-like boots.

FKA Twigs was ready to call the winner in a goddess gown of peachy nude with a strappy neck and high slit. A jeweled headpiece linked to a nose ring. Robert Pattinson in white tuxedo jacket and black trousers wore a black bow tie and a smile.