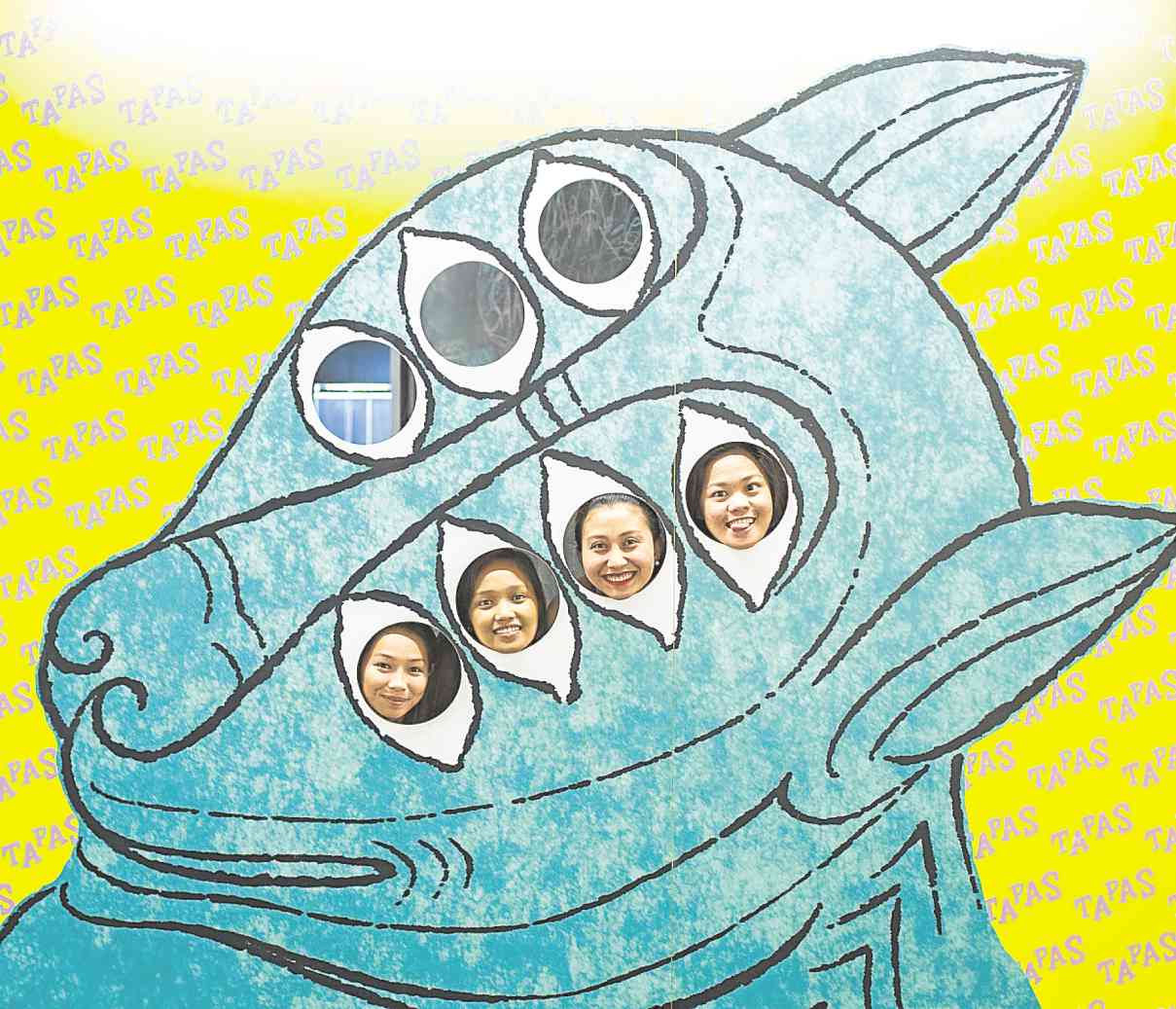 ANOTHER photo call design, this time based on the dish rinones de cordero al jerez or lamb kidneys

BEAUTY should be edible, or not at all,” the Spanish surrealist painter Salvador Dali once said.

By extension, the edible should be accompanied by beauty as well.

Apart from painting some of the acknowledged masterpieces of the 20th century, Dali also designed the logo for the Spanish lollipop brand Chupa Chups, which in some parts of the world is as familiar as the Coca-Cola logo.

(Dali also appeared in a TV ad for Lanvin chocolates—maybe he had a sweet tooth.)

In any case, the idea that art shouldn’t be confined to galleries and museums but should spill over into daily life informs “Tapas: Spanish Design for Food,” a traveling exhibit put together by Accion Cultural Española.

Now being shown at the Metropolitan Museum of Manila in collaboration with Instituto Cervantes de Manila and the Spanish embassy, “Tapas” highlights the central place that design and gastronomy hold in the Spanish way of life.

Tapas is the succession of small portions of food, served on small plates, that Spaniards eat in bars, sometimes while standing up, sometime between merienda and dinner, usually accompanied by wine.  What we call pica-pica.

Likewise, the designs included in “Tapas” the exhibit are selected for the audience’s degustation, and are arranged in three categories: Kitchen, Table and Food.

According to Juli Capella, the Spanish architect who curated the exhibit, “The first inspiration is that I have been eating for the past 55 years, three times a day. I expect to be eating a hundred thousand times in my life. And when this functional activity starts to become boring, you want to put experience and, if you are curious and you are in the field of creativity, it can be architecture, it can be design, it’s when you realize that there is more importance in these tools that the people have in mind.

“So, you can eat some pears, some vegetables and you feed yourself. If you need to cook something, you need a knife. It is a tool that someone has to design. To focus on these tools that help and improve the experience of eating was the main idea for this exhibition.”

There is a strong element of whimsy and  a tongue-in-cheek humor in many of the exhibits: a dining chair in the silhouette of Mickey Mouse, complete with ears and Mickey’s white shoes; chopstick holders in the shape of tiny animal figurines; a foosball game converted into a dining table; a dinner napkin with a necktie print that diners can tuck into their collars; and Capella’s own “Jamon de la Crisis”—five legs of faux jamon Iberico made of inflated plastic, “entirely fat-free” but rich in irony.

There are a few items of straight industrial design—stainless steel cookware, a set of paelleras ranging from tiny to humongous, even a pressure cooker.

But most seem to be design solutions to uniquely Spanish problems, such as the porrones—wine jugs designed to shoot a stream of liquid into one’s mouth without having to touch the lips, allowing groups of people to pass the bottle and still be hygienic.

Or trays resembling painter’s palettes, so one can walk around at a gathering carrying an assortment of edibles in one’s hand.

“This is something I have long wanted to see: how culinary arts and industrial design, both as creative expressions and very different forms, are woven seamlessly into this curatorial discourse,” said Dakila Fernando, the current chairperson of the University of the Philippines College of Fine Arts Department of Theory, and also managing partner of an international culinary school.

“I like how the exhibition was able to develop the relation of food and design from a historical perspective—how the triad of objects is depicted, objects on the table and food design, pushes creativity among chefs and designers from the division up to the 20th century and to the 21st century.”