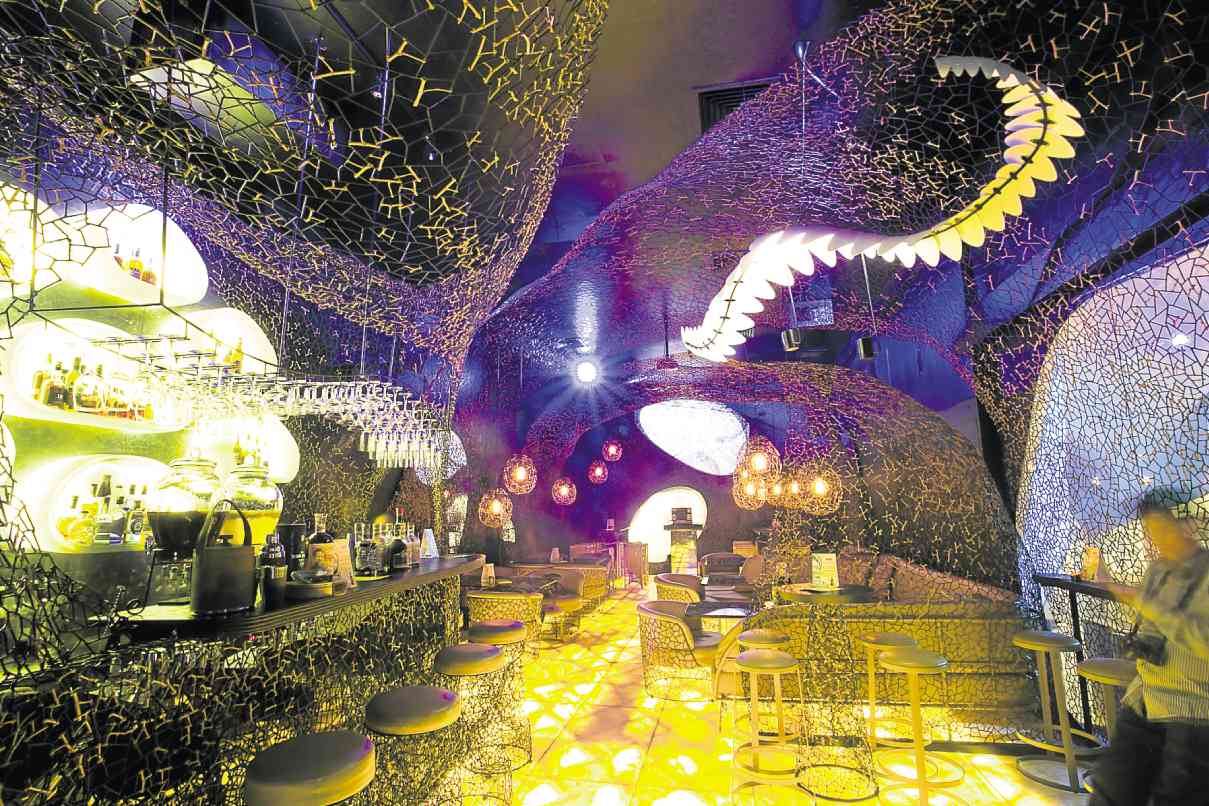 COBONPUE addedmore lights to the original design of the bar. The white undulating piece is called Spina, a desk version of which was gifted to the Emperor of Japan.

The lengths Kenneth Cobonpue would go to save a beloved piece of work: take over the entire place that houses it—in this case, a bar—and actually run the place.

The Cebu City watering hole Z Bar was the first of its kind that the world-renowned Cobonpue had ever designed, a stunning art installation that landed on the covers of coffee-table books in Europe. Since opening in 2006, it has also been featured in design magazines here and abroad.

“When Tinderbox (Z Bar’s owner) was looking in Manila for someone to take over, I was afraid that someone would come and destroy the place,” Cobonpue said. “I wanted to save my own work because I really believe that it’s very unique, not only here in Cebu or in the country but in the world.”

The fear of seeing his work demolished led him he talk to a group of entrepreneurial friends about taking over Z Bar—“since I don’t really know anything about running a bar,” the furniture designer said with a chuckle.

Morals & Malice is a yin-and-yang, two-part establishment that offers craft coffee, coffee cocktails and an all-day brunch in the Morals Lounge section, and craft cocktails in the evening at Malice Bar just across, in what used to be Z Bar.

Its tagline: “Where art meets alcohol,” to underscore Cobonpue’s designs, from furniture to décor, and the handcrafted drinks that its owners say are now the rage abroad.

The two areas, on the second level of the Tinderbox deli and café on Archbishop Reyes Avenue in Banilad, are separated by a stairway.

Morals is now what used to be an open-air balcony overlooking the street traffic. Cobonpue had it enclosed in glass to keep an outdoor feel— the design similar to that of a greenhouse or garden, he said.

The space has raw hardwood flooring, and the ceiling painted white. The furniture and décor are in natural greens and creams. Small trees line one side, which also help block the harsh sun at daytime.

“It was hard to be on par with Malice, because it was the first that I designed. It’s like a jewel,” Cobonpue said. “So we decided on a different vibe—green, natural.” Morals’ naughtily named sister establishment is “an abstract representation of nature,” added its designer.

While Cobonpue kept the original interwoven metal-and-bamboo, lacelike installation at Malice, he also made quite a few changes, like adding a new bar and taking out a good number of the chairs since bar-goers like to enjoy their drinks while standing.

Cobonpue has a special fondness for the installation—reminiscent of fireflies lit from architect Ed Calma’s onyx flooring— because it reminds him of the visual representation of molecules. “But that’s just the geek in me,” he added with a laugh.

He and his partners want to bring craft cocktails, now the big vogue abroad, into Cebu.

“We also wanted to use local ingredients found in Cebu to be sustainable. The inspiration for the menu are the flavors of Cebu,” said Rodriguez, who handles marketing and PR.

Craft cocktails are artisanal beverages with custom- and house-made syrups, infusions and bitters. Unlike typical cocktails with only two to four ingredients, a craft drink can consist of as many as 10.

“We’re not necessarily after a different market [for each establishment]. We’re after the same, but [who are into] different vibes,” explained Yu, who’s in charge of operations and finance. When Malice opened Thursday night, it was full house with his and Rodriguez’s age group—the millennials.

“We’re targeting a certain market, the more discerning kind, the lifestyle market, those who travel and value service,” said Soco, the food and beverage veteran in the group, who has his own coffee chain.

At Morals, the mood is chill, a place to enjoy cakes made by an in-house pastry chef, paired with tea and coffee, smoothies, or any of the Malice-free (read: virgin) craft beverages, from 10 a.m. to 10 p.m.