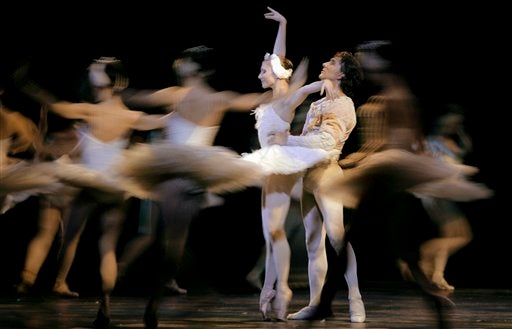 In this Sunday, Sept. 23, 2007 file photo, Ballet dancers Julio Bocca, right, and Alina Cojocaru perform Swan Lake in Buenos Aires, Argentina. A compelling drama at Romania’s national opera has been drawing huge audiences for weeks. But it’s not a production of “The Marriage of Figaro” or “The Barber of Seville” that’s grabbing the limelight, it’s an off-stage dispute between two international ballet stars and Romanian musicians that has already cost a government minister his job. AP

BUCHAREST, Romania — A compelling drama at Romania’s national opera has been drawing huge audiences for weeks. But it’s not a production of “The Marriage of Figaro” or “The Barber of Seville” that’s grabbing the limelight, it’s an offstage dispute between two international ballet stars and Romanian musicians that has already cost a government minister his job.

English National Ballet principal dancer Alina Cojocaru and her fiance, Danish choreographer Johan Kobborg, have brought international prestige to the opera in the three years they have worked there, but two Romanian conductors and some musicians think Kobborg is overpaid and has hired too many foreign dancers, while Romanian-born Cojocaru is accused of speaking Romanian “with an accent.”

On one occasion a ballet had to be canceled with the audience in its seats and the dancers onstage, because the musicians refused to play.

Tensions have erupted between the newcomers with international careers and the majority of Romanian opera employees who have safe but low-paid jobs, permanent contracts and are not subject to job appraisals — a system that functioned well under communism, when foreign travel was severely restricted and artists were reluctant to try to emigrate to pursue a career abroad.

“Anyone who is good goes to Vienna, New York or Covent Garden,” said music commentator Alexandru Patrascu. “Those who remain are good at a national level, but not internationally. The system leads to mediocrity and the xenophobia we are seeing is a part of that.”

So far, the Bucharest National Opera has had four interim managers since April 4 and three shows canceled at short notice. Last week, Kobborg and Cojocaru and seven other artists were banned from entering the opera building unsupervised. Amid the crisis, two upcoming performances of the ballet “Giselle” this week have also been canceled.

Cojocaru has spoken about an atmosphere of “fear and intimidation” in the opera, after Kobborg resigned as artistic director of the ballet saying he could not work with interim management.

The dispute became public in early April when newly appointed interim manager, conductor Tiberiu Soare, removed Kobborg’s name as artistic director of the ballet from the opera website. Soare told The Associated Press he did that because the position did not officially exist.

Passions erupted. Some 30 ballet dancers walked out in support of Kobborg, while other staff gathered on the steps of the opera, shouting “Foreigners out!” After Kobborg resigned, Cojocaru — whose face appears on posters around Bucharest in the lead role of “Manon” — said she would not dance the next performance.

The next episode came on April 23 at a performance of “DSCH/The Dream.” Ballet dancers took their positions, but a few feet below in the orchestra pit, the musicians refused to play, some sitting with their arms folded in defiant protest. The audience booed the orchestra and applauded the ballet dancers. The show did not take place.

When Romanian-born Ioan Holender, the ex-director of the Vienna State Opera, called for the current opera house to be closed down and a new institution to be created, with only the most “capable” people employed, employees retorted that his statement was “an attempt to destabilize the national culture,” and called on all operas and philharmonic orchestras in Romania “to join our campaign to preserve tradition and national value and eradicate abuse and fraud in the current cultural system.”

The drama has spilled over onto the political stage. Culture Minister Vlad Alexandru tendered his resignation after he was unable to resolve the crisis, only to say he’d had a change of heart and would stay, before finally being fired by Prime Minister Dacian Ciolos on Tuesday. Ciolos also got involved, saying the 63-year-old opera needed quality artists and shows “whether they are from Romania or elsewhere.”

President Klaus Iohannis added his voice to the dispute, saying: “there are only a few mistakes that can be imagined that the culture minister has not made yet in this matter.” On Wednesday, he appointed Corina Suteu, who previously headed the New York office of the Romanian Cultural Institute, as the new culture minister, and urged her to use “tact, dexterity and indulgence” in tackling the problems.

Built in 1953, the opera stands on the northern bank of the Dambovita River, just across the road from the upscale Cotroceni area. It recently underwent an 8 million-euro ($9.2 million) revamp.

It was during this period that general manager Razvan Ioan Dinca and several others were suspended amid a criminal probe into financial mismanagement of the institution, which was when the other problems at the opera began to rear their head.

Music commentator Patrascu said managers need “courage, reforms and determination to raise the level of the opera,” to that of other countries in the European Union.

He said artists believe their mission is to educate the public, “but they have little respect for the public.” TVJ