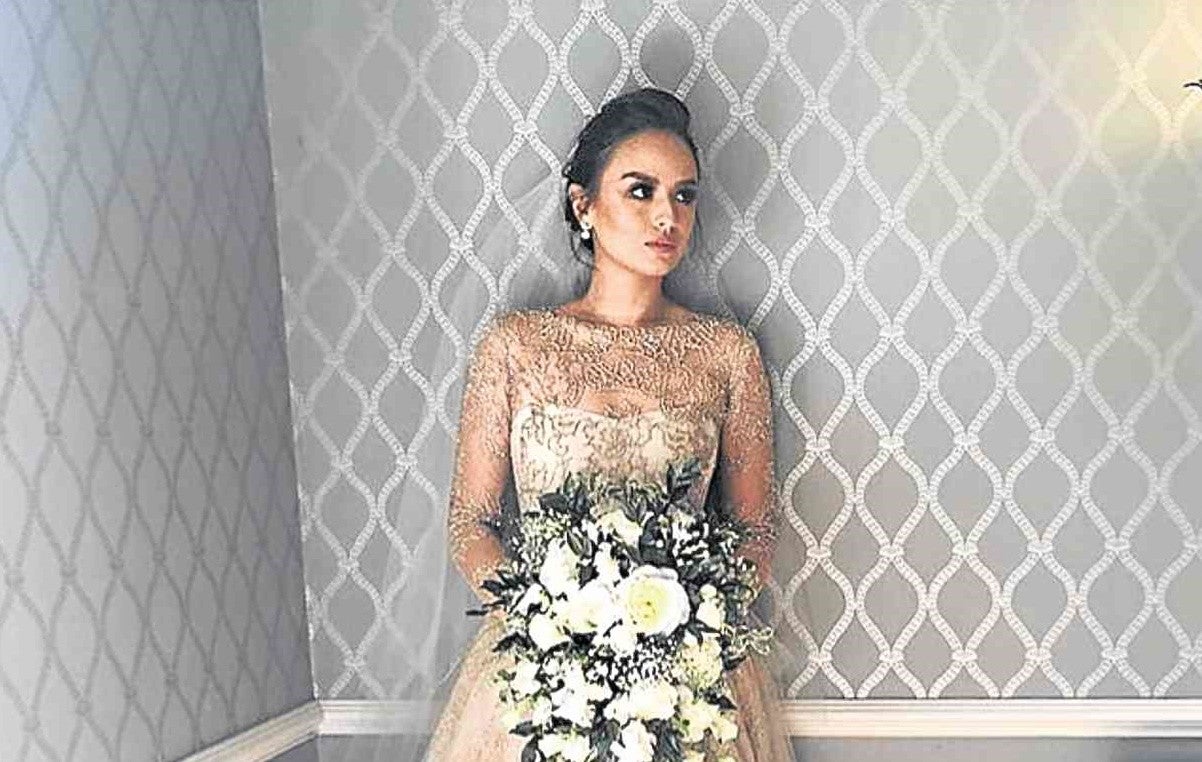 Last week, the style meter shot up when three of the country’s celebrity women got married in drop-dead glam wedding frocks.

Fans on social media were agog at the surprise wedding of Georgina Wilson to her British fiancé, Arthur Burnand, in England on the weekend.

The sort-of announcement was made on Instagram by her close celebrity friends in attendance, with snaps of the host and model on her despedida de soltera, dressed in an off-white, slinky number with peplum detail by American label Marchesa. The shoulders featured embroidered bows.

The bodice and hemline were embroidered with champagne gold thread and beadwork.

The Lhuillier dress was a gift from Dr. Vicki Belo, Wilson acknowledged on her Instagram.

Wilson’s hair was styled in a loose chignon, accented with a jeweled headband, not unlike the runway styling of Lhuillier’s model.

One of today’s most accomplished theater actresses and foremost performers Cris Villonco picked a sleeveless, empire-waist dress with a full skirt by Lebanese designer Elie Saab, for her altar date with Paolo Valderrama. Saab is a Hollywood red-carpet favorite.

The pixie-haired singer-actress wore a birdcage fascinator by Mich Dulce.

At the reception, Villonco changed into a custom number by her friend, London-based Lesley Mobo, who volunteered to make her a dress when he learned of her wedding. Designer and bride met for the first time at the birthday lunch of Dominique Cojuangco in London a year ago, and they hit it off instantly.

“The discussion about the gown went on and off for a year,” said Mobo, who was in town for the weekend wedding.

“I did only one fitting with her. As soon as she tried it, it was perfect at bagay sa kanya.” It took Mobo a month, on-and-off, to finish the dress.

In an Instagram snap, the granddaughter of music icon Armida Siguion-Reyna was pictured ecstatic as she was getting fitted into the dress by Mobo, who said the design was an homage to the bride’s legendary grandma.

The fully embellished halter number was a stark contrast to the bride’s largely unadorned church dress.

Another weekend bride was Rima Ostwani, who wed Jihad Najjar in a Francis Libiran ball dress of layers upon layers of fine, soft tulle.

Designer and bride are longtime friends, and Libiran said it has always been easy to dress up Ostwani. “It’s like dressing up a living Barbie doll on her special day,” he said of the experience.

“Rima’s couture wedding gown was almost a year in the making,” Libiran said. “From the very first time that we sat down and talked about it, Rima already knew what she wanted: classic, timeless, elegant and ‘very Francis Libiran,’ as how she would describe it… Rima was very straight to the point and I loved how our ideas of a ‘perfect wedding gown’ jived instantly.”

Libiran, the go-to designer of many local celebrities, created a full-skirt dress with a long-sleeved, sheer illusion-tulle bodice, with custom embroidery and hand-sewn beadwork. It was cut low in the back, and had a full cathedral train.

“We made sure that the gown is richly textured and would fit perfectly,” he said of the bride’s photogenic dress. “I think the main reason it turned out wonderful is because Rima’s wedding gown was created from a dream that became reality.”

Ostwani later changed to a more party-appropriate, figure-hugging strapless dress for the reception. The Rosa Clara design had a fully embroidered bodice and a tulle mermaid skirt.