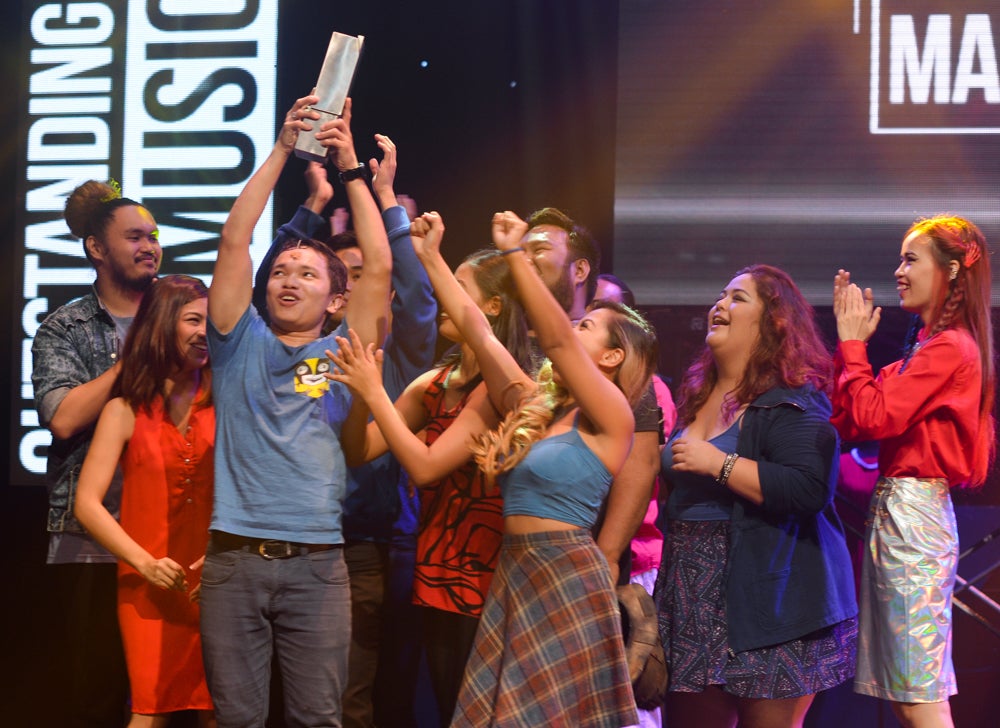 The cast of Tanghalang Pilipino's "Mabining Mandirigma". ALL PHOTOS BY ELOISA LOPEZ

The winners of the 2016 Philstage Gawad Buhay Awards have been announced, and we all know that Tanghalang Pilipino’s “Mabining Mandirigma,” a musical that cast a female lead as Apolinario Mabini, won the night with 12 awards.

Celebrated yearly and organized by Philstage, the Gawad Buhay honors achievements in the performing arts. Its eighth edition was held April 28 at Onstage Greenbelt 1 in Makati.

Hosts Topper Fabregas and Kakai Bautista began the night by charging on stage in the horse costumes of Trumpets’ “The Horse and His Boy,” with Fabregas wearing the horse’s head and Bautista the horse’s behind. Fabregas called themselves GrabHorse and complained about the surge—and the loose, cheeky banter pretty much set the tone for the rest of the evening.

Later in the show, Pepe Herrera and Jerald Napoles made an incredible commitment to a joke when they came out in glittery backless ballet costumes and pranced around the stage as Kim Molina announced the winners for the ballet category. The three were cast members of Peta’s hit musical “Rak of Aegis” (which will have its fifth restaging this June 17 to Aug. 28).

A number of dance winners weren’t able to attend the ceremony, so Ballet Manila’s artistic director Lisa Macuja Elizalde and Ballet Philippines’ artistic director Paul Morales kept going up the stage to accept the awards on behalf of their respective companies.

Likewise, when Delphine Buencamino won the award for female lead performance in a musical, it was her mother, celebrated actress Shamaine Centenera-Buencamino, who accepted the award on her behalf; she noted that her daughter’s lead role in “Mabining Mandirigma” was done during a very difficult time in their family, and so the award was doubly special.

Things turned serious when videos featuring actors, directors, light designers, set designers, dancers, choreographers, etc. were played at intervals in the program. Each interviewee talked about his or her craft, and through this we learned a little more about the creative processes of theater people.

Aside from the awards for the productions, Gawad Buhay also gave the Natatanging Gawad Buhay for lifetime achievement to two women pioneers in the performing  arts: Celia Diaz Laurel and Alice Reyes.

Diaz Laurel, an enduring actress who also made a mark as a set designer, painter, writer and wife of the late Vice President Salvador Laurel, surprised everyone by singing “The Colors of My Life” before accepting her award. Though already in a wheelchair, for her performance, she stood up and stayed by the piano, while her son Cocoy played accompaniment. “What a very proud moment,” she said of her award. “What a wonderful audience. With all my heart, I want to tell you how happy I am.”

The other Natatanging Gawad Buhay awardee was Alice Reyes—National Artist for Dance and founding artistic director of Ballet Philippines—who started her speech by recalling what a friend told her: “You know what lifetime awards mean? It’s time to make a will.”

Reyes expressed happiness at being awarded along with Diaz Laurel. “When I grow up, I want to be like Celia,” she quipped. Then she gave a rousing, thoughtful speech about the need for artists to stay the course especially in the age of social media.

“Do we take time so we are not totally consumed to do ‘rackets’ that then lead to compromises, that then lead to shortcuts, and eventually to the point where what was not acceptable is now acceptable? … In that process, if I may be of some continuing presence or service to the world that I love—theater, dance, music—allow me to be a voice, reminding us all of our responsibility as artists, as directors of theater and dance companies, as leaders making artistic policies. Our joint responsibility is to always make sure that we never allow our artistic standards to be sacrificed. In the nanosecond pace of our lives today, we must make time for artistic excellence.”

Reyes’ battle cry was met with a standing ovation by the community of artists before her.

Actress Cherie Gil was on hand to squire director Loy Arcenas to the stage when he accepted the award for outstanding original play for Peta’s “Arbol de Fuego.” Gil headlined that production, but she lost to Irma Adlawan of TP’s “Mga Buhay na Apoy” for female lead performance in a play. But that didn’t dampen her spirit; after Arcenas’ remarks, the bubbly Gil said that, since she didn’t make it to last year’s awards, she made sure to be present in this year’s—if only to show off the new dress she had bought for the occasion.

Philstage president Audie Gemora (who won the lead actor in a musical trophy for “La Cage aux Folles”) was all praises for Jenny Jamora’s direction of the event. Indeed, the Gawad Buhay ceremonies have become sleeker, more fun and more exciting each year. Next year’s awards—the eve to a landmark 10 years of honoring excellence in the local theater industry—should be something to look forward to.

Male Lead Performance in a Play
Jef Flores, “This Is Our Youth” (RTT)

Outstanding Ensemble Performance for a Play
“The Normal Heart” (AAI/TNT)

[Note: Roselyn Perez was erroneously announced as having won for “33 Variations.” She won for “The Normal Heart.” This list reflects the correction.]