Korina: ‘My voice has equal volume as those of the others’ | Lifestyle.INQ ❮ ❯ 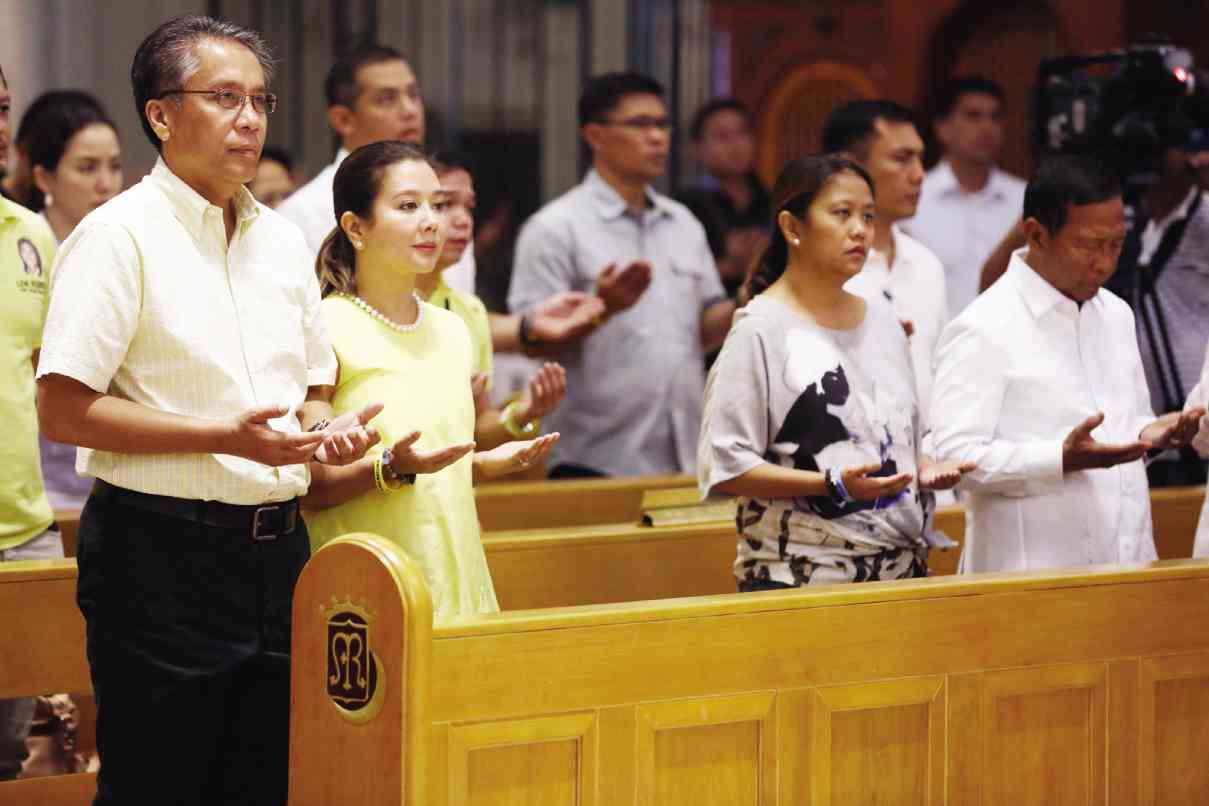 “OUR LIVES are inextricable from each other. When everyone else is back to their daily grind, it is just Mar and myself for each other.” NIÑO JESUS ORBETA

Korina: ‘My voice has equal volume as those of the others’

It was apparent how Korina Sanchez-Roxas was using our impromptu dinner at Novotel—this was a month ago—as a time to catch her breath. And she said as much—how she could use a good têtê-à-tête to wind down her day.

She looked fresh and dainty.  That wisp of a body didn’t look at all like it was being subjected to a killer schedule. She was on a momentum, not so much her body as her mind.

Although much of what we talked about that night was off-the-record, we continued communicating with her after that.

“I was cleaning up Mar’s desk in the bedroom and chanced upon what he calls his ‘prayer notebook,’ Sanchez-Roxas felt free to share something.

“Curious, I flipped through the pages. They were handwritten prayers—Mar apparently writes his prayers when he wants to clear his mind and conscience. It was a guilty moment that I read some of his prayers. One prayer goes:

“‘Lord, why do I want to run? Help me examine my motives. Clear my heart and my mind to discern why I am asking this kind of power from You. I will simply borrow this power from You, Lord, as a vehicle to do good for the majority. Help me stay on the right path.’

“No one was supposed to see this. It is between him and God. I think one of the most important things to consider in discerning who to vote for is a candidate’s motives. But how can we really tell? I can, with my husband. And for a candidate, who seeks power, to regularly check himself and his conscience is, I think, one of the most essential credentials a presidential contender can have.”

Excerpts from our Q&A via e-mail:

How many provinces have you covered?

“I’ve been going around the country since a year and a half ago because it happened to be ‘Rated K’s’ 12th-year anniversary, also my sixth-year wedding anniversary. The activities merged with the campaign when campaign period began, just leveled up.

“I do a mini caravan (this simply means I open both sides of the van I’m riding and I throw ballers, fans and komiks on the streets to the people, which is so much fun! I shout, ‘Roxas tayo!’ and people scream and wave back.

“Next I drop by a palengke. We scour the market, talking with vendors giving them calendars. Outside the palengke usually are terminals where we also raid the passengers, haha, they love it.

“Next would be a university talk. I have a career talk called the ‘5 Secrets of Success’: 1) Love and serve your parents; 2) Believe in yourself; 3) Dream and plan your dream; 4) Better masipag than matalino; 5) Pray and believe.

“It is an hourlong talk  exchange. They would usually ask about Mar. You can’t get away from selfies with the students. So, imagine trying to have a selfie with 1,500 to 3,500 students each and every time!  I really have to hold up my smile despite being crushed and despite the heat. It is enjoyable, until someone steps on your foot, hahaha!

“I then go to a women’s group talk or multi-sectoral group talk. This is for about another hour.

“And then I go meet with community leaders to talk about how important this fight is and why Mar is the best man for the job.

“In between all this is my mini caravan. I can do about two of these a day, meaning two provinces. If the grid is shorter I do three provinces in a day.

“Before sundown I should be on my way home. I have meetings waiting for me, maybe three or four meetings until midnight.

How has the reception been?

“It has always been overwhelmingly warm. People know me. They’ve been watching me for 30 years on TV and listening on radio. They see me helping the poor all this time, I speak their language.

“When I give a talk, I tell stories, I have no script, no speeches. I try to speak from the heart for almost an hour each time.

“My template is participative. I ask them questions… In the end I give them a choice… They want to know not about platforms, but about who Mar is as a person.

“So I tell stories about how Mar is a very simple man. He wears a plastic watch all these 25 years, wears less than 10 shirts over and over again, eats gulay and saltless sabaw as comfort food, and our home is small.

“And I tell them I say this because this is testament to the fact that if you lead a simple life, you are most probably not corrupt. And that if Mar is a loving husband, son, father and doggie-daddy, Mar will most probably be a loving president.

“Some say what I do is too difficult. But, people especially in the provinces, are such a joy to interact with. They have little in life. A smile or a handshake or a selfie with them is the highlight of their month. I see them sweating, wearing old tattered clothes but they’re reaching out and laughing, so joyful.

“It fills my heart, it is therapeutic against all the negativity from the city. The exposure to their lives as we talk with them provides me a deeper, richer perspective about what I am here for, what we are all here for. Clearly, we are all put here for the purpose of making life better for another. This is the entire purpose of our lives. To help each other. And I hope we get this chance to.

“My question: If you were to choose a driver who would bring your children to school  and back home every day, which applicant would you entrust the safety of your children to?

“I also tell them about my interview with Malaysian Prime Minister Mahathir Mohamad. He ruled Malaysia for 22 years. Malaysia is bustling, with an expanding skyline, wide roads, a beautiful airport, peace and order.

“I asked Dr. Muhamad: ‘What’s the secret?’ His response was: ‘Korina, I saw the shadows of the fruits of what I planted only after six years. For a plant to grow fully and to enjoy its fruits you need time to nourish. So, I don’t really know how you expect things to happen for you in the Philippines because you change administrations every six years.’

“This election is a once-in-a-lifetime opportunity for the reforms and gains under the Aquino administration to continue. It wasn’t all perfect. Which administration was ever and will ever be perfect?

“But the gains are evident and measurable, irrefutable. This is our chance at 12 years of continued reform and Mar envisions that within 18 years, we will be a Singapore.”

“This is our first campaign as husband and wife. In 2010 I didn’t know yet the ins and outs of a national campaign. But I am a quick study. My training, too, all my adult working life in broadcast for 30 years is to meet measurable targets. You know in television it is like elections every day. Our ratings

—how we fare with our audience—is measured and reported out by the minute. So, strategy for a political campaign can’t be too different.

“Imaging, messaging is half the battle, the ground campaign being the other half.

“So, yes, I am in Mar’s team not just because I’m his wife and this is my life, too, that we’re putting on the line. It is also because I’d like to lend some of my background training to the efforts alongside those of several others who’ve worked indefatigably, with no remuneration, for the cause.

“Suggestions are all on the table and weighed. Options are voted on. My voice has equal volume as those of the others.”

How often do you see Mar? How has the campaign strengthened your marriage?

“I believe this has all strengthened our relationship. Marriage really is a work in progress. Different experiences and stimuli bring new situations and reveal how we individually deal with it. 2010 was a painful loss and I only then realized how to be ‘one with your husband’ really means.

“Our lives are inextricable from each other. His pain is mine, there’s no avoiding it. His joys are mine, too. And when everyone else is back to their daily grind, it is just Mar and myself for each other. That’s what marriage is.

“This time, we are older, sturdier, readier, stronger. This campaign is the backdrop of a new dynamic in that I am much more involved—by design, in his life. I have again given up my own life as I know it, my career is on hold and my future, too, put on the line for this bid.

“It is now all about Mar and what he stands for, what he is fighting for. And I will stand beside him through it all and wherever he goes.

“Mar is giving it his all, yes, but we also both know as he tells me that, ‘we will give it our all for this good fight, for the people. The people will just have to see it.’

“We understand and know each other much more deeply now. We just look at each other and we know what we’re meaning. Our conversations are short but meaningful. The journey has been enriching.”