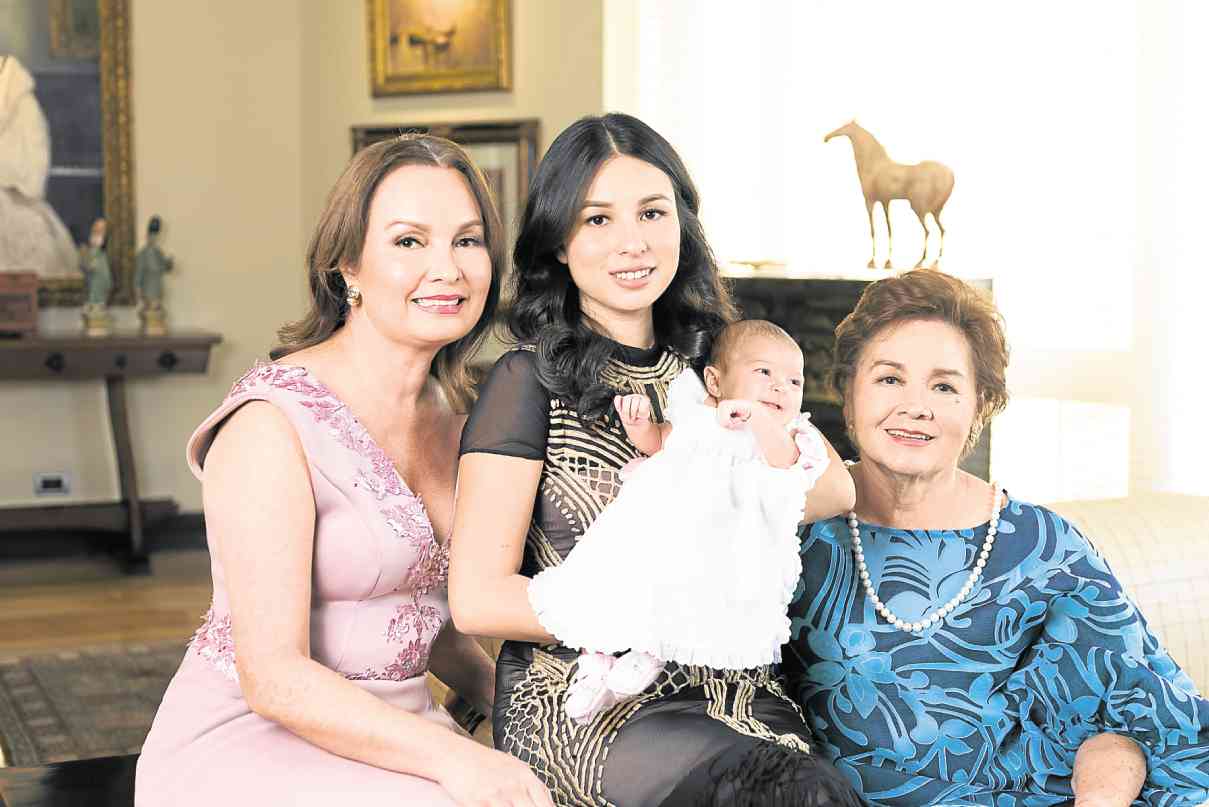 From famous mothers to accomplished daughters: Lessons across generations

Education and keeping an open mind motivate Margie Moran-Floirendo and her daughter Monica Floirendo-Ugarte to explore possibilities to be happy in life.

A born achiever, Margie credits her mother Rosario Roxas Moran, a teacher at the University of the East, for emphasizing the importance of education. “She was a diligent scholar. She encouraged us to pursue our interests, yet work hard,” recalls Margie.

Her mother would drive Margie and sister Lulette to Hyatt for their noontime modeling stints and take them back to St. Theresa’s high school. Despite Margie’s involvement in the Karilagan cultural group and Broadway musicals, she managed to maintain good grades.

Margie was involved in projects that advocated peace and women’s rights in Muslim Mindanao. Her community work with Habitat for Humanity spurred her to pursue graduate studies in rural development at the University of London.

Her daughters Gabby and Monica, who grew up in Davao,  took up ballet and piano lessons.

“Mom taught us to be independent and to live our own lives,” says Monica, who majored in political science at the University of Bristol in New York, then studied cooking at the French Culinary Institute. Gabby studied at Brandeis University in Boston and now works at Rustan’s Supermarket.

Monica looks up to her mother as a role model who has a sense of purpose. She always saw Margie keeping busy—from managing Pearl Farm in the ’90s to sustaining the 47-year-old Ballet Philippines, of which Margie is president.

“My mother is hardworking. It’s a trait that defines her. I would like to pass that on to my daughter,” says Monica.

Love for the arts and being focused on one’s goal are the threads that bind Mita Rufino, daughter Maritoni Tordesillas, and tweener Natalia Teresa.

“My mother, Remedios Palanca Bantug, was a business person, but she was artistic,” says Mita Rufino. “She loved Filipino music and dances. Before I was sent to Australia as Rotary exchange student, she made me study folk dances so that I could show them our culture,”

Today, Mita is president of the Filipino Heritage Festival.

Among her four children, Maritoni is the artist. In New York, she took voice and ballet. The Neubert Ballet School saw her potential and gave her a half scholarship.

When Maritoni decided to be a ballerina, Mita set her up in a nice apartment in New York, put her through high school and trusted her to fend for herself at age 16.

When she was principal dancer of Philippine Ballet Theater (PBT), Maritoni would still fly to New York to get coached by stars of the American Ballet Theater.

In 1994, Maritoni was one of the ballerinas cast as Odette and Odile in PBT’s “Swan Lake” with American guest artist Charles Askegard. Her mother booked a Russian coach and American icon Cynthia Gregory to polish her act which, in turn, produced exciting results.

“I find myself doing the same with my daughter Tessa,” says Maritoni, who has retired and now runs a dance school.

Tessa or Natalia Teresa—named after the ballerina Natalia Makarova—has been studying with her mother since she was three years old. Pushing 12, this wunderkind has won first place in classical and contemporary categories of local dance competitions. Last year, she got to the semifinals in the classical division of the Asian Grand Prix in Hong Kong.

“I instill in her the same values of perseverance and hard work that I learned from my mom,” says Maritoni.

Tessa rejoins that her mother taught her to go all out in her efforts to achieve her goals. “If you want to win, you’ve got to work for it,” she says.

Granddaughter Mayumi Buensuceso, 5, comes up to strangers and befriends them.

“I see myself in Mayumi,” says Mutya Buensuceso, country manager for the multinational beauty company Luxasia. “She’s got better PR than me. My mom is like that.”

As daughter of Alice and former movie actor Tony Ferrer, Mutya was 14 when she joined the variety show “That’s Entertainment.” At 17, she won Mutya ng Pilipinas ’92.

Alice guided Mutya throughout her showbiz career. Mutya got along easily with farmers as well as foreign diplomats. “My mother exposed me to all kinds of people and showed me how to relate to them. That’s a valuable gift. I want to teach Mayumi the same value.”

AS A young widow after World War II (her husband was killed by Japanese soldiers), Carmen “Chitang” Guerrero Nakpil had to fend for herself and her children  for many years until she remarried.

“I fled to Mexico in 1975 because of martial law, bringing with me Fatimah and Leon,” Gemma says. “Mommy gave me very ‘motherly’ advice: The very least you can do is give your children three meals a day, at the same time. That will give your lives a semblance of order,” says Gemma, author and president of the Heritage Conservation Society (HCS).

Fatimah Araneta—who works for Gaspart Studio, a school for woodworking and ceramics in the south of Mexico City—singles out her mother’s culinary skills. Growing up in Mexico, Fatimah and Leon learned how to make Filipino dishes such as adobo and pancit.

An architect, Fatimah saw her mother as an example of  a woman who could  balance career and family life.

“She organized our lives efficiently so we could always be together. We always ate fresh fruits and vegetables. We’d go to a park every Sunday to run. She also showed us how to weather life’s storms with courage and equanimity—no crying, sulking frowning, please, you’ll ruin your character and get wrinkles,” says Fatimah.

Just as the elegant Chitang would remind her children to look polished at all times, Fatimah says Gemma taught them to be well-groomed, and that beauty came from within.

Fatimah finds herself imparting the same lessons to her own children Tekwani and Aurora Morales: “I hear my own mother speaking!”

Just as Chitang developed in Gemma the reading habit and exposure to the arts, Gemma’s grandchildren are voracious readers and dabble in the arts.

Gemma cites other values from her mother such as love of country, honesty, integrity, discipline, punctuality and love for the Almighty—all of which had sustained her while being a single parent in a foreign country.

Now pushing 73, Gemma enjoys reading and writing columns and books. “I still strive for excellence, though, which I learned from my mother, and continue asking myself what else I can do for our beloved country.”

ARMIDA Siguion-Reyna, proponent of Original Pilipino Music and culture, singer-actress, producer and advocate of artistic freedom and artists’ rights, pushed her children and grandchildren to raise the bar of their craft.

Daughter Monique, a former magazine editor, is also a photographer. Among her granddaughters, Dara designs jewelry, while Tere is into film production.

Monique’s daughter Cris, who recently married her fiancé Paolo Valderrama, grew up in the limelight as a singer-actress.

Monique gives importance to Armida’s sense of discipline—completing a task after starting it, balancing financial prudence with investing in something worthwhile, good grooming and being courageous.

“The things I learned from my mother: Know yourself. Continue to discover new strengths and weaknesses. This way, you will never have to sell yourself short,” says Monique.

In turn, Cris credits Monique for teaching them to be polite. Even then, she also learned the art of quiet assertion from her mother, which obviously is Armida’s trait. “Although I’m a fighter, I run it by my mom before I say or post anything,” says Cris.

Cris recalls how Armida, being the perfectionist, would nitpick her performances. It came to a point that Cris didn’t want to have anything to do with Filipino music and culture. Today, though, she is proud to imbibe her grandmother’s nationalistic spirit.