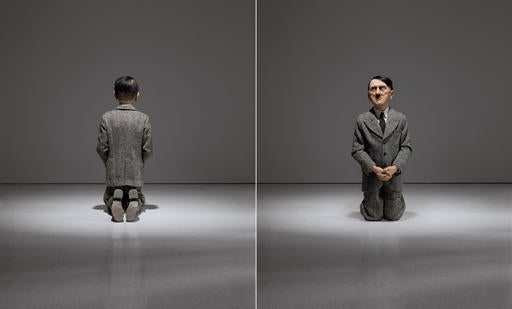 This combination of undated photos provided by Christie's shows "Him," a controversial sculpture of Adolf Hitler by Maurizio Cattelan. Viewed from the rear, it appears as a child-like figure kneeling in prayer. But from the front, viewers come face-to-face with a likeness of the Nazi leader. AP

NEW YORK — The highly anticipated art auction season arrives with a specially curated sale that includes a sculpture of a kneeling Hitler by Italian artist Maurizio Cattelan and a ball suspended in a water tank by Jeff Koons.

Both works are coming to auction for the first time Sunday.

Christie’s “Bound to Fail” themed sale kicks off the weeklong New York auctions of modern, post-war and contemporary art at Christie’s and Sotheby’s.

There are 39 works in Christie’s sale.

Cattelan’s controversial sculpture “Him” appears as a small child kneeling in prayer when approached from the rear. But from the front, the unmistakable likeness of Hitler comes into view. It’s estimated to bring $10 million to $15 million.

“One Ball Total Equilibrium Tank” by Koons could sell for over $12 million. TVJ