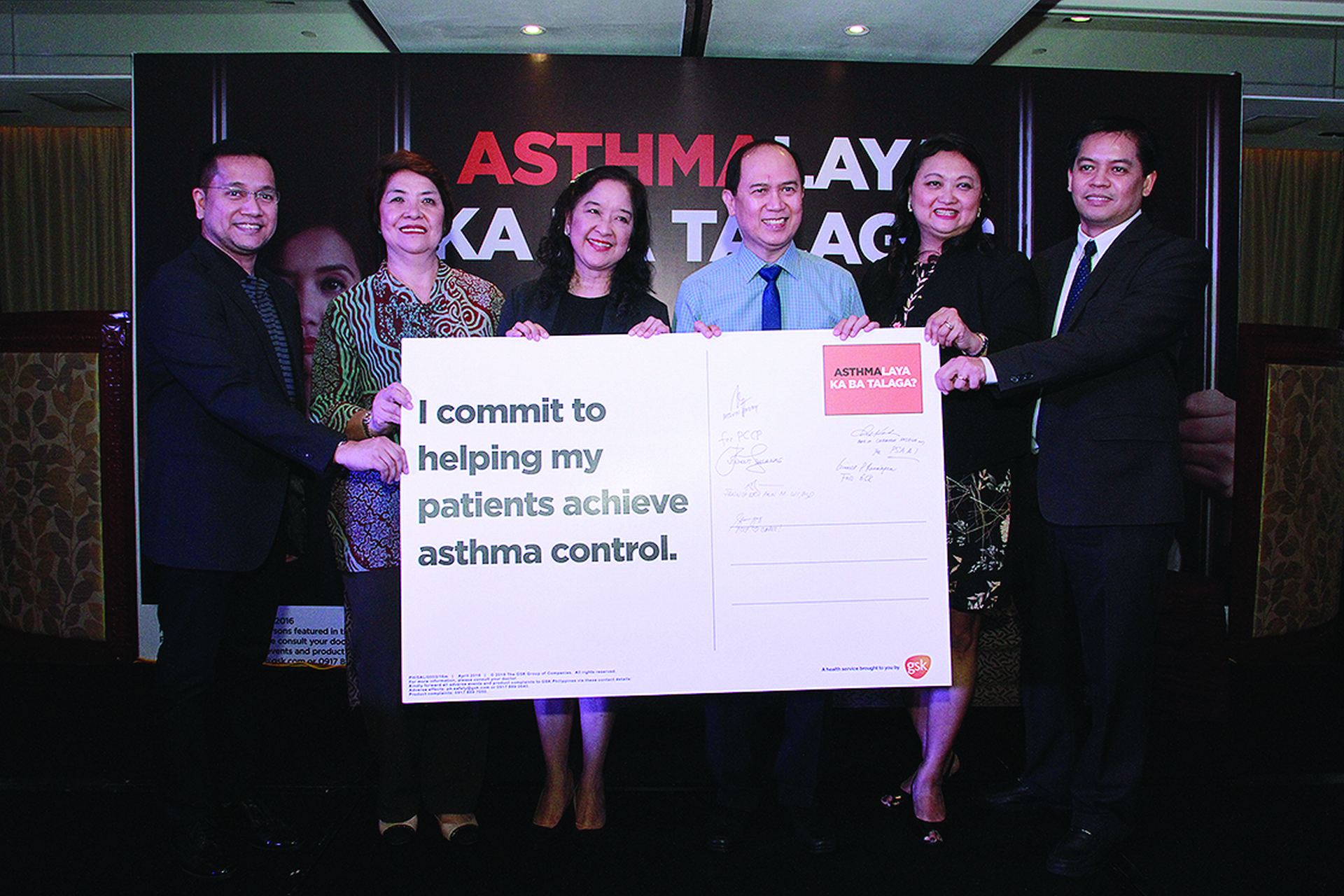 The challenge of asthma

Do you have a nagging cough for several weeks that turns for the worse, or frequently wake up at night with tightness of chest and have trouble breathing? You may not realize it, but it could be asthma.

Asthma is a chronic respiratory disease that affects over 300 million people worldwide. Of the 11 million reported cases in the Philippines, it is prevalent among patients under 40 years old, especially children.

The bigger challenge is that  lack of education and awareness may be abetting the rise of asthma.

Multinational pharmaceutical company GlaxoSmithKline (GSK) Philippines has launched “ASTHMAlaya Ka Ba Talaga?”—a campaign on asthma control that encourages patients to consult their doctors.  It is done in partnership with the Philippine College of Chest Physicians (PCCP) and Philippine Society of Allergy, Asthma and Immunology.

Bing Salandanan, GSK group product manager for respiratory marketing, underscores the importance of the campaign. “The challenge is that 98 percent of Filipinos with asthma have not controlled it,” she says.

GSK has also been collaborating with drugstores. “People from low-income bracket go to the drugstore and consult the clerks instead,” Salandanan points out. GSK will put up an ASTHMAlaya Ka Ba  booth for people to check for symptoms.

Dr. Melvin Pasay, pulmonologist and GSK medical affairs manager, explains that in an asthma attack, the lining of the airways swells, and the muscles around the airways tense up. This condition limits the flow of air  through the lungs and leads to abnormal breathing.

Asthma can be set off by many factors—genes, stress,  strong emotions, change of temperature, environment, dust, pollen, molds, chemicals in the air or in food, tobacco smoke, exercise, animals and viral infections.

Pasay notes that asthma varies in intensity. It is manifested as shortness of breath, wheezing, rapid breathing, persistent coughing and extreme fatigue, or a combination of these.

Dr. Vincent Balanag, PCCP president, says asthma can be genetic: “If you have a parent or if both parents are asthmatic, one of the children will be predisposed to it.”

Asthma can be tricky. It can either manifest immediately or in 12 hours after one has been exposed to the allergens.

Occupational asthma is triggered by substances in the workplace that narrow down the air passages of the lungs. Then again, allergy and asthma can sometimes occur together.

“Asthma allergy is caused by airborne particles,” says  Balanag. “The allergen goes into airways which become hyperactive. Whenever an asthmatic inhales pollen, dust or perfume, the airways become swollen and constricted. The breathing is either noisy or difficult.”

Although asthma is a common disorder, it can be challenging to diagnose it. It can be mistaken for nasal allergy and shortness of breath caused by obesity or chronic obstructive pulmonary disease (COPD).

But while asthma is largely genetic and usually occurs in childhood, COPD or extreme difficulty in breathing is caused by smoking and shows up later in life, says Balanag.

However, a patient may not always be aware of the symptoms and their severity. Sometimes airway obstruction may occur without the  obvious signs.

Unlike tests for other diseases, detecting asthma does not involve sophisticated methods. Doctors often depend on family histories and  methodical probing on symptoms and exposure to the environment.

A patient is asked if, in the past month, these signs have occurred:

Symptoms of asthma more than twice in a week

Waking up at night due to coughing, gasping for air, having difficulty in exhaling, or breathing faster than normal

If the symptoms limit one’s activities

“Based on the patient’s answers, the physicians plan and  prescribe a diagnostic test on how to manage asthma,” says  Barañgan.

The physician makes an action plan that involves medication as well as avoidance of asthma triggers, measuring the airflow in the lungs, and monitoring the symptoms and the situations when asthma is difficult to manage.

The medicines are taken for the short and long terms. Quick-relief medicines like inhalers or bronchodilators help loosen the tightened muscles in the airways. “You take it at the onset of the symptoms,” says Balanag.

The physician emphasizes patients should take the medicines as prescribed.

“Since we know that asthma is a chronic disease of inflammation of airways, you have the daily controller for long term,” explains Balanag. “These asthma-control medicines such as corticosteroids (inhaled anti-inflammatory medicines) are taken every day even if there are no symptoms.”

However, patients make the common mistake of discontinuing their medication once their condition improves. This puts their health at stake and could make them more vulnerable to a severe attack.

“You can have asthma most of your life because of genetics and exposure to allergens. That’s why the medication is sometimes taken for an indefinite period,” says Balanag. The physician emphasizes the need for the daily controller therapy to inhibit attacks, including life-threatening ones.

“Patients who claim that their asthma has been cured simply mean that the signs are not there,” says Pasay.  “Technically, there is no absolute cure for asthma, but there are medicines to control its symptoms.”