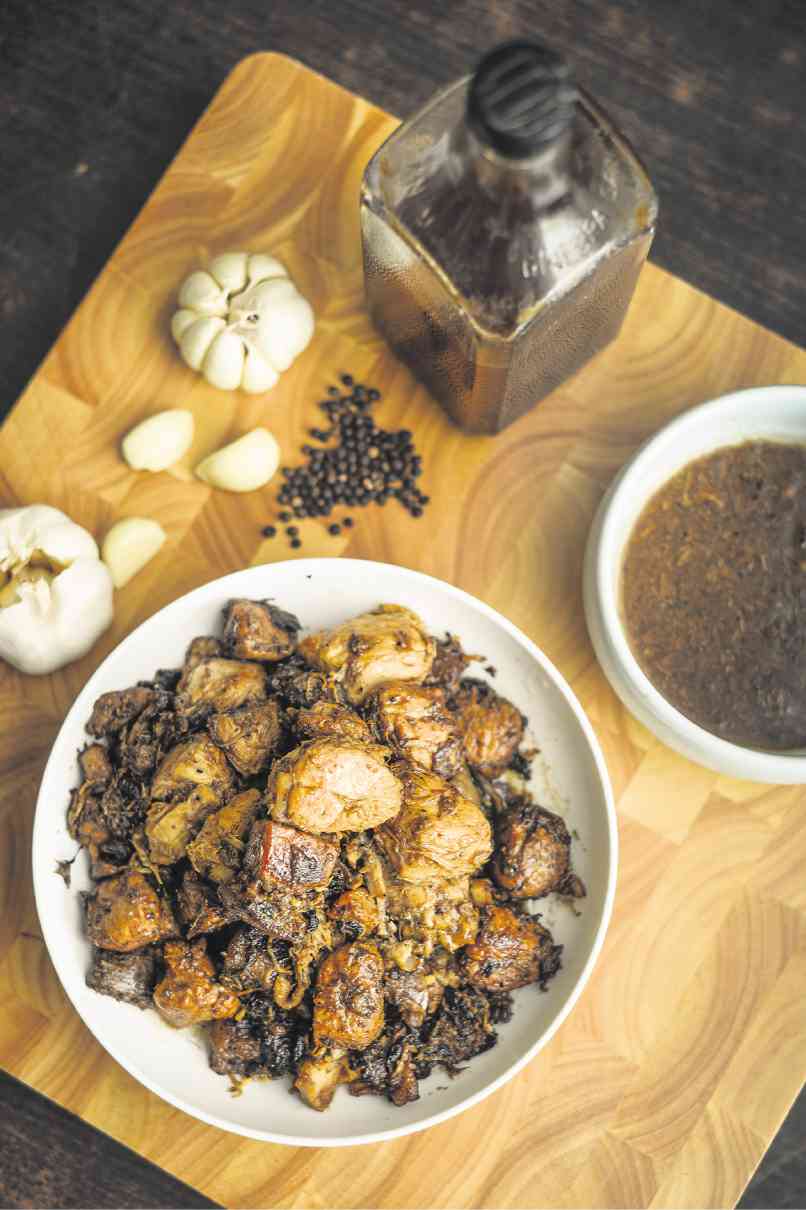 ADOBO del Diablo is quite tedious to prepare. After all the ingredients are tossed into the pan, you wait for the dish to caramelize and then deglaze it. ELOISA LOPEZ

“I like my adobo the way we do it in my town,” says Gonzalez, “no soy sauce, no bayleaf and, most especially, the sauce is served separate from the meat.”

Gonzalez grew up in Sulipan, a small barangay in the town of Apalit, Pampanga. Here, says the 56-year-old chef, the Kapampangan adobo contains only garlic, pepper, fish sauce (patis) and vinegar. It comes in a deep bronze color, produced by constant simmering and deglazing of the pan with stock when a crust is formed. The tasty caramelized stock is brought back to the meats to give that deep, reddish-brown hue.

Other localities would simply darken their adobo with soy sauce—which is a crime in the Kapampangan household, Gonzalez says.

“In fact,” he adds, “if you marry a Sulipeño and you put toyo in your adobo, women will talk and gossip about you—for being such a bad homemaker and not being patient enough to deglaze your adobo.”

The Sulipan adobo—also known as Adobo del Diablo—is quite tedious to make. After all ingredients are tossed into the pan, you wait for the dish to caramelize.

Soon after, a thin crust is formed at the bottom of the pan. Then add the stock and deglaze it till you can almost smell the aroma of sweet garlic.

The meat sucks the stock back in, and then it coats the meat, before the meat starts caramelizing again. Repeat this process four to five times.

“As you deglaze and caramelize the adobo, the mixture becomes darker and darker you’d think there’s toyo in it,” Gonzalez points out. “The natural caramelization of all the ingredients in one pot would make you appreciate the interplay of flavors in one single dish.”

The Adobo del Diablo offers a rich but sharp garlicky flavor that blends with the variety of meats added in the concoction—chicken heart, blood and giblets, beef liver and pork kidney.

“I don’t know why it’s called Adobo del Diablo (Adobo of the Devil),” says Gonzalez. “It’s probably so good that lots of people might have died from eating the adobo. It’s not spicy at all.”

When serving the adobo, the meat is placed on a huge platter with the adobo sauce on the side.

“We eat it dry and douse the rice with the adobo sauce,” says Gonzalez.

Gonzalez runs the famed Café Ysabel and is founder of the Center for Asian Culinary Studies. He authored several cookbooks such as “The Little Adobo Book,” a collection of adobo recipes from all over the country, from Adobong Crispy Pata to Pininyahang Adobo.

While compiling the recipes, Gonzalez found out that there’s really no correct way of cooking adobo.

“I guess the correct way is to multiply all the families in the Philippines and you have all the correct ways of preparing adobo,” he says. “It’s really per family. Each has its own tweaks, quirks and nuisance.”

Aside from Kapampangan adobo, Gonzalez also likes Batangas adobo, which has achuete. He also enjoys adobong kambing and Chinese adobo with tofu and egg.

Gonzalez admits he started a bit late in learning to cook adobo. One day, a European guy asked him what Filipino food he can actually cook.

“I froze for a while and it kind of dawned on me that, with all of my European and Asian-style cooking, I have very limited repertoire in Pinoy food,” he admits. “That experience started sending me into full circle. I’ve traveled all around and explored Asia for 10 solid years, and then I’m back to Filipino cooking.”

He pairs his adobo with slices of ripe mango, or with salted egg salad with tomatoes and sweet bagoong alamang.

“In my town, I don’t know why, they often serve adobo and kare-kare together,” says Gonzalez.

Return brown colored liquid to the meat and continue until crust forms again. Repeat deglazing with stock about 3 times.

When stock is added, put all variety meats when chicken and pork are tender and sauce turns brown.

Simmer for 15 minutes or until dry then separate meats.

Deglaze pan with stock. Serve the sauce on the side and meats separately.