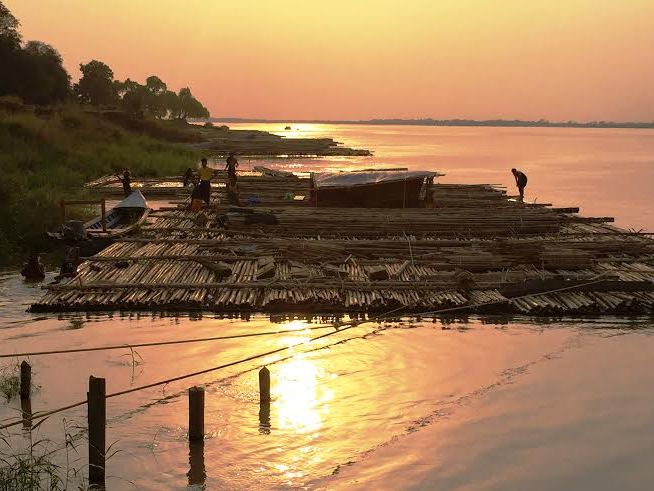 One of the mightiest rivers of our region is Myanmar’s Irrawaddy. Given the current vogue to use the original Burmese names rather than the Anglicized versions, it is now referred to as the Ayeyarwady. The added syllables roll easily off the tongue. They seem to serve as reminders of the great length that this river travels—about 2,170 kilometers.

The neighboring Mekong runs more than twice this distance, but half of its course is in China. What needs stressing is that it is the Ayeyarwady which can claim to be the longest stream completely within Southeast Asia.

The Ayeyarwady has always been the lifeline for the land through which it flows. Its waters sustain countless fields of crops vital for a developing nation. Records show that the river was already the conduit for trade as far back as the sixth century. Much later, it would be central to the economic programs of the British colonizers who built many port facilities on its banks.

At present, cruising on the Ayeyarwady has become big business. Many of the boats used are modest affairs that do only day trips. A handful, however, are quite large and luxurious.

I happened on the newest offering in this class—the Strand Cruise—while looking up travel prospects in Myanmar. It was operated by the venerable Strand Hotel where I had enjoyed staying when I first visited Yangon. It didn’t take long to find myself signed up with some loyal companions and ready to sail.

Not so easy, however, was the process of getting to our vessel which was docked in Northern Myanmar. Negotiating Yangon’s chaotic domestic airport would prove quite challenging. Yet, by the next morning, all this tumult was forgotten.

We were in the cruise’s meeting place—the garden of the oldest lacquer factory in Bagan, enveloped in a mist of fruity teas. There were mellow cheeses and congenial egg sandwiches creatively spread on wooden carts.

During that welcome breakfast we met Olivier, a vice president with the corporation that manages the Strand. Then there was Bilou, in charge of shore excursions and a magician to boot! There were also Bartholomew, our chef, and Neville, the cruise director.

I would learn that Olivier and Bilou knew the Floirendos who own Pearl Farm Resort in Davao. Our conversation became decidedly less formal after this revelation: Miss Universe! Margie Moran!

Becoming acquainted with our vessel was an equally pleasant affair. We found her sleek and trim with clean lines. Exploring the cool interiors, I was impressed with the restraint with which the ship (built entirely in Myanmar) had been designed. The spaces were uncluttered and satisfyingly coherent.

The carved pillars of the dining room which resembled the trunks of palm trees seemed to stand out at first. But then I realized that they referenced the floor lamps and their stems of pale wood.

There were shelves carrying fine craft pieces, their intricate embellishments and tangy hues echoed by the carpet of the lounge on the upper deck. This deck also had a swimming pool flanked by divans with legs that stood in the water.

Our cabin was a sanctuary. A leafy pattern had been chosen for the fabrics, lending an air of a quiet grove. One of the walls was rounded, its graceful curve resonating with the semi-circle of the sofa and the desk. We had vast windows which let in the shimmering world outside.

In contrast, some of the other ships on the Ayeyarwady were elaborately decorated. Often, there was an attempt to bring back the supposedly glorious days of river travel in the 1920s and ’30s.

Another approach was to recreate the opulent Burmese palaces of the past. The result could sometimes be gaudy. The Strand steered clear of all these, giving us rooms that were subtle and fresh.

There was a whole river out there with changing panoramas of villages and stupas at every bend. The ship décor shouldn’t be so distracting that it would keep the mind from wandering.

So comforting were our spaces that one was tempted to simply hole up. But Bilou had arranged many excursions for us. We were brought around to view the wonders of Bagan and Mandalay, places whose names were inked with magic. Yet of all the splendid sites we had visited, the ones that resonated with me the most were in the area around Ava, one of the ancient capitals of Burma.

We saw a white tower surrounded by crenellated walls that evoke waves lapping against a mythic peak. After almost getting lost in the corridors of a brick monastery, I was reminded of a scene in an Hercule Poirot movie where the characters try to find each other between the huge pillars of Karnak. And I stood by myself in a small dark chamber at the heart of still another temple, listening to a recording on my phone of my late father playing his violin.

Getting off the boat to see all these marvels, we met a young Burmese woman who offered us some trinkets. I shook my head upon which she launched into what must have been a well-rehearsed spiel: “Not now?   Will you think about it? Maybe later? I will look for you. I remember you.”

She followed us throughout our tour on her dilapidated bicycle.

Our fellow passengers were equally interesting. There was a doctor who had been traveling in Asia for many months after leaving his job in New York. There was a newscaster from Thailand and his wife. We  learned about his celebrity only after he was recognized by some students who immediately demanded a photo. There was also a British couple celebrating a wedding anniversary.

For all the amiable company, I likewise savored being alone. Waking very early in the morning, it felt like I had the ship to myself. Walking out on the deck, I witnessed the sun rising. I saw how it paused briefly to be an orange drop on the fluid shoulder of the water.

It was then that I knew something was missing. Despite all the efforts of the cruise staff members—and certainly through no fault of theirs—there was still not enough time to understand the river. For this was the Ayeyarwady and she had much to tell.

Admittedly, on trips like this, there should be no pretense that it was possible to truly interact with one’s surroundings. Air-conditioning, glass windows, the abundance of food, the very ship itself—all these create a capsule which protects and isolates from the heat, the dangers, and yes, the poverty outside.

We can try to break the barriers: a lecture on life on this eternal stream, a visit to a fishing vessel. But in the end it is a matter between the river and one’s self.  We will have to fathom why, for centuries, humans have stood at the water’s edge and—like José Rizal on the shores of Laguna de Ba-y—wondered what lay on the other side.

I stood near the prow, mesmerized by the scenery. And maybe I imagined that the Ayeyarwady had something to say to me: “I will look for you, I remember you.”