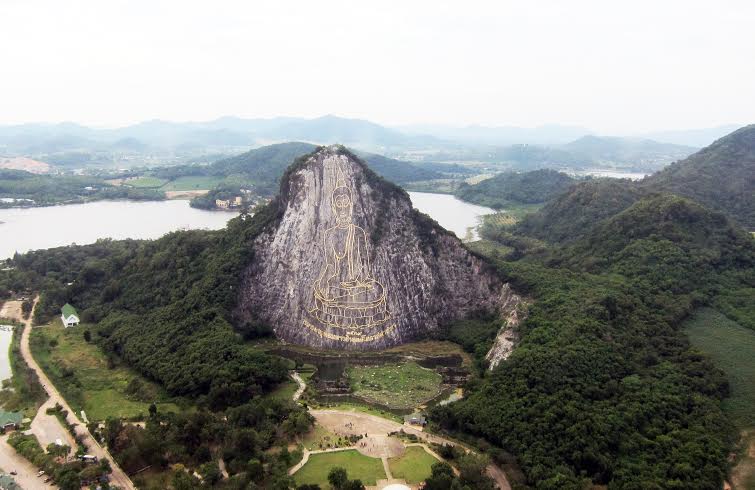 THE BUDDHA, made of pure gold, is carved on a limestone cliff.

A luxury tour of Thailand

We were savoring, sip by sip, the reds and whites inside a café—young wines harvested from the owner’s vineyard inside a Tuscany-inspired, 480-acre property. In a few more minutes, we were to board a chopper for a tour of Pattaya.

But for now, we were being feted like royalty at Silverlake Vineyard in Thailand, less than an hour’s ride from Pattaya.

Its founders, Surachai Tangjaitrong and Supansa Nuangpirom, were not around but its wine ambassador, Dennis Dila, a Filipino who grew up in Thailand, noted how wine-making has been appreciated, steadily picking up in the region and drawing visitors from around the world who are curious to try out “New Latitude vineyards.” 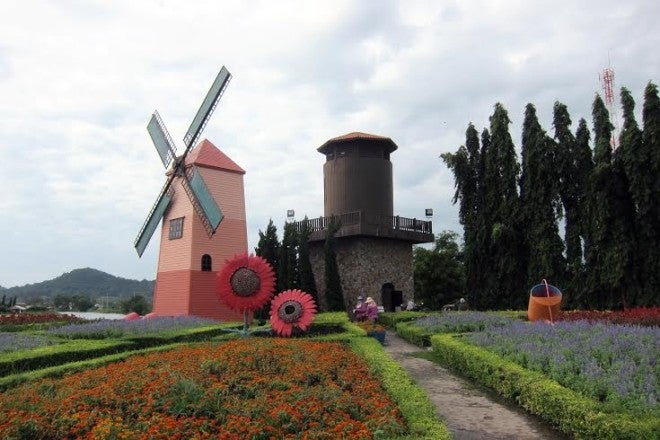 Thanks to Thailand’s dedicated viticulturists, New Latitude wine is a term predicted to become increasingly familiar in the coming years, just like Old World and New World wines. Over a decade ago, only grapes grown between the latitudes 30th and 50th were deemed suitable for viticulture. Thailand proved them wrong.

One of Thailand’s best

It produces one of Thailand’s best shiraz and shiraz blends like Tango Shiraz Cabernet Sauvignon, and 2010 and 2012 Private Reserves. It also carries a 2011 Chenin Blanc.

The estate has facilities for making wine and juice. There’s a guided tour of the winery facilities, and wine-tasting at the Cellar Door, a charming little pub run by its small but efficient staff.

One of the thrills of going to Silverlake is the arresting view of the Khao Chi Chan mountain, where the biggest image of Buddha is sculpted on its limestone cliffs. Our guide said that the Buddha, measuring 70 meters tall and 109 meters wide, is made of pure gold.

This luxury tour—sponsored by the Tourism Authority of Thailand (TAT) with Flight Care Aviation Phils. Inc., the Philippine representative of TAT—included the hottest thing in Pattaya tourism at the moment: a 30-minute helicopter ride for a bird’s-eye view of the bustling beach town.

There’s a briefing prior to the tour regarding safety and emergency measures before the entourage signed waivers and climbed up the weighing scale for the handlers to determine how heavy is the entire group. The trip to the weighing scale proved to be a thousandfold more terrifying than the actual chopper ride, which went as smoothly as expected.

Admiring the city’s skyscrapers from the chopper is a completely different experience from, say, sailing on a yacht at sunset, watching the sun sink into the horizon and turning bright orange on one side, and admiring the coast of the Ocean Marina Yacht Club as it gently glistens, reflecting shades of Pantone into the sea.

By nightfall, we went back to the Centara Grand Mirage Beach Resort—the six-starred, jungle-inspired, family-friendly hotel this side of Pattaya. Designed to resemble Jurassic Park’s Lost World, the two-building hotel is connected by rope bridges.

There are man-made rivers and waterfalls, and a pathway that leads straight to the golden sands of the Wong Amat beach in north Pattaya.

A mere 15-minute ride away is the recreational center Fairtex, where we learned how to punch like a man and kick like a beast.

There are muay thai lessons, the real thing, complete with gloves and face mask. Fairtex is the home to many of the city’s best mixed martial arts fighters, male and female. One lesson won’t make a fighter out of you, but it’s a grim reminder that your self-defense instincts have become so rusty.

Another big attraction when in Pattaya is the Nongnooch Pattaya & Resort. It’s a 600-acre paradise  with a botanical garden that opened in 1980. The property has an Animals Kingdom; French Garden inspired by the geometric gardens of Versailles; Italy Garden, with plants cut to form cones, circles, cubics, bars; Floating Garden; Heart Garden; Waterfalls; potted Desert Rose (Adenium) Garden native to Africa; Car Gallery, a collection of rare vintage sports cars; more than 100,000 pots made of baked clay in various shapes and sizes at the Pottery Display Garden; Stonehenge modeled after the famous 4,000-year-old wonder in Wiltshire, England.

Its more popular destination, however, is the Zoo Garden, where live animals can be petted. There are birds and deer and a tiger.

Back in Bangkok, we stayed at the fabulous boutique hotel, SO Sofitel Bangkok, which boasts a magnificent view of Bangkok’s skyline. It’s a hotel that supposedly puts you in your element, that is, your Chinese element. Floors have themes based on the five elements.

There’s the very Zen water element; blue-theme earth element, similar to the color of the planet; the wood element with murals on silk like the old Siam; and the metal element, contemporary modern suits in white with metal and glass; and fire element, with red as its dominant color.

While in Bangkok, we were toured around its latest high-end shopping destination, the EmQuartier. This entertainment, shopping and dining mall is where Thai stars are seen shopping or strolling.

It has a man-made cascade 40 meters high, and a Qurator that serves as a platform for ideas that embrace Thai fashion sensibilities, highlighting 60 iconic and emerging designers in one single hub.

We ended the tour by dining at the Water Club, on the topmost floor of SO Sofitel Bangkok. Once again we found ourselves sipping wine.

Indeed, there’s more to Thailand than its pretty ladyboys, crazy tuk tuk rides and jaw-dropping sale prices. It is also about luxury, spending quality time with the family, and the unique experience that make you think you’re in Europe when you’re in the middle of Asia.