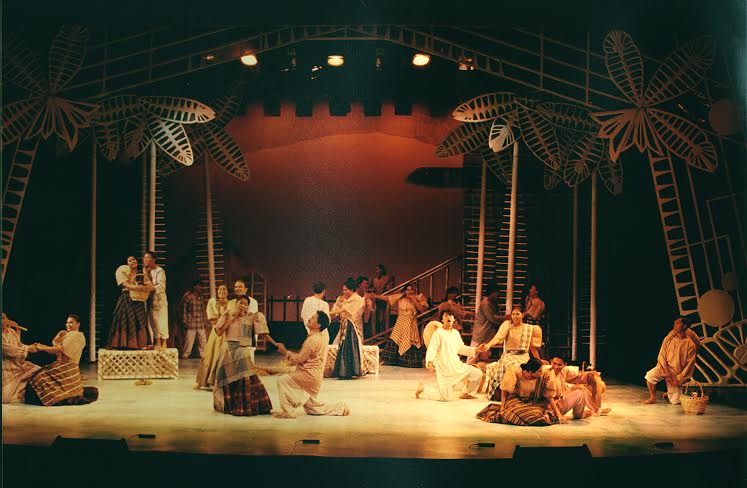 An ongoing exhibit shows how Salvador “Badong”  Bernal, National Artist for Theater, did not just make visually appealing set designs, but also created a stage that was filled with meaning.

Have you ever wanted to watch a faulty play just so you could see its beautiful set? In 1997, there was one such. It was a musical called “Lapu-Lapu,” and people went to it mostly to marvel at Bernal’s set. “Lapu-Lapu” was about colonizers who traveled to our lands by means of ships, so the whole stage was transformed into wooden slats shaped into waves. The wooden slats formed the platform for the actors and bled into the edges of the stage.

“That set saved the production,” said Nicanor Tiongson, cocurator (the other is Gino Gonzales) of the exhibit “Badong: Salvador Bernal Designs the Stage” at the Ateneo Art Gallery, which will run until July 2.

Before being displayed at Ateneo, this exhibit was shown at the Cultural Center of the Philippines (CCP) in 2013 and has toured several destinations around the country. Ateneo is its 10th stop.

The scale model of the “Lapu-Lapu” set is displayed at the exhibit along with other scale models and photo slideshows of Bernal’s sets; some costumes that he designed; videos of interviews with him interspersed with videos of the plays that have used his set; and his mixed-media, watercolor and ink drawings of costumes and sets.

The exhibit also has a browsing copy of Tiongson’s book on Bernal, the title of which is the same as the exhibit.

It is no wonder the National Artist award, the highest honor the Philippine government bestows on local artists, was given to Bernal; he is the first and so far the only Filipino set designer to receive that distinction. Practitioners of the craft before him were seen as mere decorators of the stage. Bernal, now considered the “Father of Theater Design” in the Philippines, changed the game by elevating set design into an art form.

Tiongson said that Bernal thought in pictures because he was a poet. Whenever he’d design a set, he’d read the script and talk to the director or the choreographer to work out the meaning of the play or dance,        and then he’d think of a visual metaphor that would best encapsulate the material.

This can be seen in the scale model of the set for “Sa Bunganga ng Pating,” a 1995 sarsuwela by Tanghalang Pilipino. The story revolved around loan sharks who preyed on poor people, which made Bernal think of how big fishes eat small fishes. He integrated that image into his design; when you see the mansion of the loan shark, for instance, what seems like white grills are, on closer look, fish skeletons. Even the leaves of the coconut trees beside the mansion have veins that form into fish bones.

The baro’t saya costumes worn by the sarsuwela actors are also on display at the exhibit, and the colorful patterns of their skirts and the appliqué on their shoulders also carry the fish motif. All these details were designed to visually evoke the play’s central conflict.

“He interpreted the material in a way a director would interpret it,” said Tiongson. “He added meaning to the play.”