Pope willing to study if women can be deacons | Inquirer Lifestyle ❮ ❯ 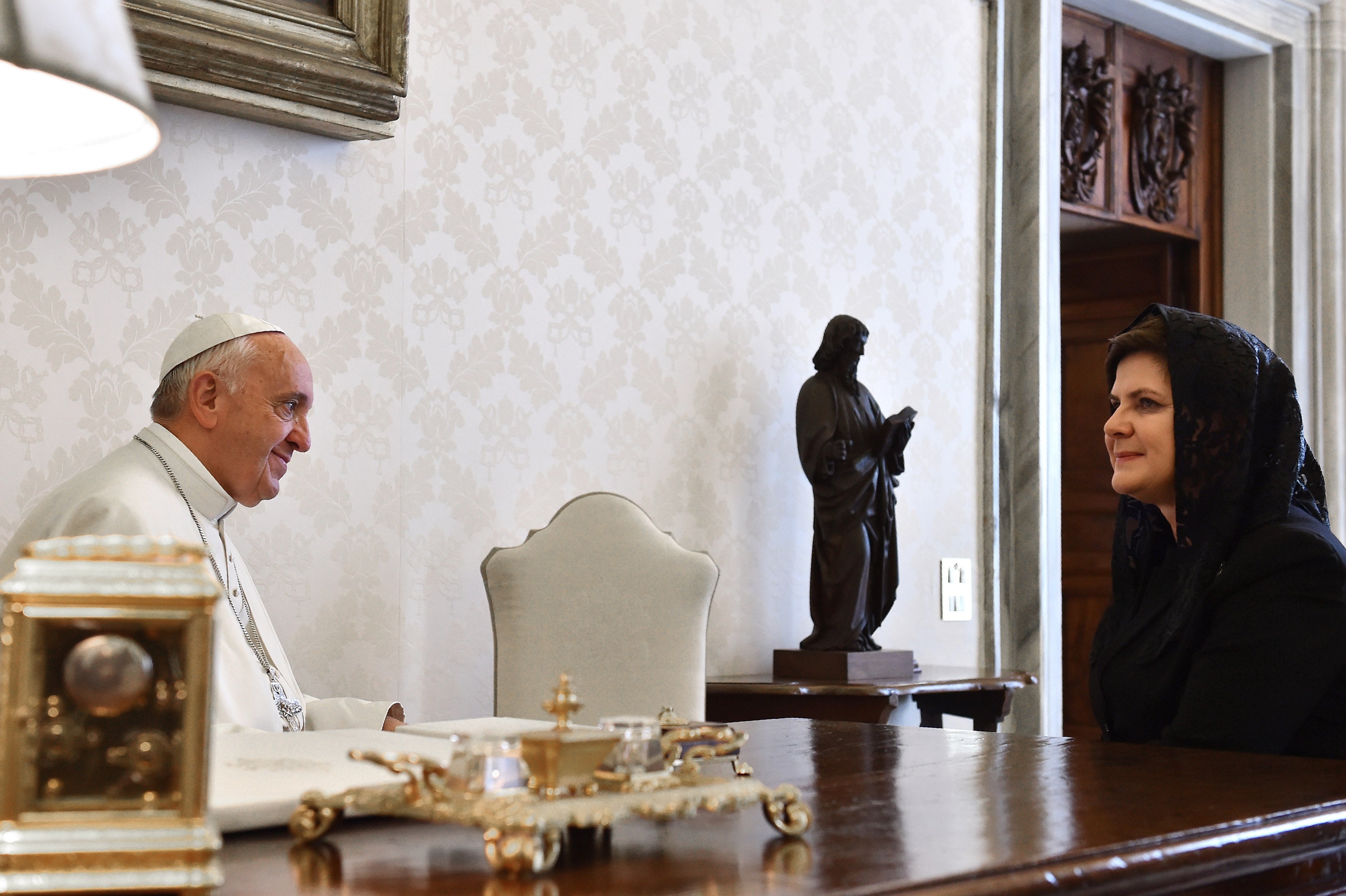 Pope Francis talks with Poland's Prime Minister Beata Szydlo during a private audience in the pontiff's studio at the Vatican, Friday, May 13, 2016. (Gabriel Bouys/AFP Pool via AP)

Pope willing to study if women can be deacons

VATICAN CITY—Pope Francis said on Thursday he was willing to create a commission to study whether women can be deacons in the Catholic Church, signaling openness to letting women serve in ordained ministry currently reserved for men.

Francis agreed to a proposal to create an official study commission during a closed-door meeting with some 900 superiors of women’s religious orders in Rome for their triennial assembly.

Deacons are ordained ministers but are not priests, though they can perform many of the same functions as priests: preside at weddings, baptisms and funerals, and preach. They cannot, however, celebrate Mass.

No to women priests

The Pope in no way signaled during a 75-minute conversation with the sisters that the Church’s longstanding prohibition on women priests will change. But asked if he would be willing to create a commission to study whether women could serve as deacons, Francis said he was open to the idea, according to the National Catholic Reporter and Catholic News Service (CNS), which had reporters in the audience hall.

The publications quoted Francis as saying: “I accept. It would be useful for the Church to clarify this question. I agree.”

Francis noted that the deaconesses of the early Church weren’t ordained as they are today. But he said he would ask the Congregation for the Doctrine of the Faith to report back on studies that have been done on the issue, CNS said.

The Pope also said he would ask another Vatican office in charge of the liturgy to explain more fully why women aren’t allowed to give a homily at Mass. Women can only preach at services where people do not receive communion.

The Women’s Ordination Conference, which advocates for women priests, praised Francis’ willingness to create a study commission as a “great step for the Vatican in recognizing its own history.”

“The female diaconate is not only an idea whose time has come, but a reality recovered from history,” he said in an e-mail. “This is news of immense joy for the Church.”

From the start of his pontificate, Francis has insisted that women must have a greater decision-making role in the life of the Church, while reaffirming that they cannot be priests. He has said repeatedly that he values the “feminine genius,” that there’s no reason why a woman couldn’t head certain Vatican offices, and that the Church hierarchy would do well to hear more from women because they simply see things differently from men.

But history’s first Latin American Pope has also hit a few sour notes with women, calling Europe an infertile “grandmother,” urging nuns not to be “old maids” and once terming new female members of the world’s leading theological commission as “strawberries on the cake.”

On Thursday, he drew round after round of applause as he spoke freely with the sisters, asking them to challenge him and lamenting how so often nuns find themselves working as “servants” for priests, bishops and cardinals in ways that “undervalue their dignity.”

The sisters cheered when he suggested that priests should instead pay local women to do the housework so that the sisters could teach, care for the poor and heal the sick, CNS said.

“I like hearing your questions because they make me think,” CNS quoted Francis as saying. “I feel like a goalie, who is standing there waiting for the ball and not knowing where it’s going to come from.” TVJ

Pope Francis tells priests to pardon women who have abortions