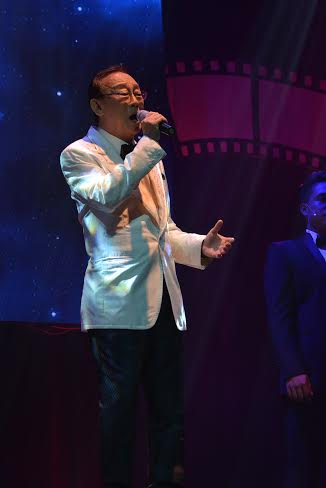 From ‘AlDub’ to ‘AlGeorge’: Alden joins George T. Yang of McDo in concert

BUSINESSMAN George T. Yang joined scholars of the Klassical Music Foundation (KMF) in “Songs from a Silver World,” a concert of movie soundtracks recently at the Carlos P. Romulo Auditorium at RCBC Plaza in Makati City.

Yang, founder of McDonald’s Philippines and himself a classical singer, joined the scholars and guest-artists such as soprano Rachelle Gerodias and actor and McDonald’s endorser Alden Richards in the finale.

Dean Raul Sunico of the University of Santo Tomas (UST) Conservatory of Music thanked benefactors for enabling scholars to pursue their training in different schools of music in Manila.

President of the Cultural Center of the Philippines, Sunico is also president of KMF.

Yang, chair of KMF, told the audience singing came late in his life. He added the enjoyment of music through singing was a gift enhancing life itself.

Yang said since his life had been enhanced by music he felt he should give back, so he founded KMF, which had provided assistance to some 50 voice students to date.

He said some of the beneficiaries had pursued higher musical studies abroad.

Among the scholars who performed was Gerphil Flores, who brought fame to the country when she placed second runner-up in “Asia’s Got Talent” last year.

On the podium at the pit stood Michael Jacinto who led the orchestra ensemble of students from the UST Conservatory of Music in accompanying the singers.

The concert unfolded as a neatly packaged production of songs from the movies such as the James Bond series, Walt Disney movies, Italian cinema. Opera adapted to or used in films was also part of the program.

Choreographic movements enhanced the flow of music from segment to segment. The light design highlighted the mood of the songs.

Singing was full and glorious. Singers disclosed singular as well as collective ability to cross over from the popular, using a well-intoned natural voice, to the operatic, which disclosed a developing technique rooted in bel canto.

Singing ranged from solo to duet to quartet. Singers struck a powerful chorus in the finale.

Gerodias, who mentors some of the scholars (she teaches at UST), displayed the stance of an accomplished singer as she dished out in top form Puccini’s moving aria “Un Bel Di,” from “Madama Butterfly.”

Despite being heavy with her second child, Gerodias projected her high notes well. Her phrasing was done with ease.

Alden Richards provided glitter by singing “Wherever You Will Go.” It would perhaps be a good idea for this genteel actor to get coaching from any of the scholars who showed tremendous vocal prowess and verve.

Yang, a tenor, rendered some ditties. Hearing him again after quite a while was a refreshing delight for this writer.

Despite his age, his voice had retained its glow. What made his singing impressive was the sincerity with which he brushed his songs. He felt the sentiment of the songs, and breathed life into them.

His phrasing was articulate and his high notes saucy, secure and brilliant.

He showed his capabilities through “Parla Piu Piano,” the theme from “The Godfather” and “Love Story.”

Herminigildo Ranera of the UST Conservatory served as musical director.