'Regrets, I've had a few' – and one of them may be that tattoo | Lifestyle.INQ ❮ ❯ 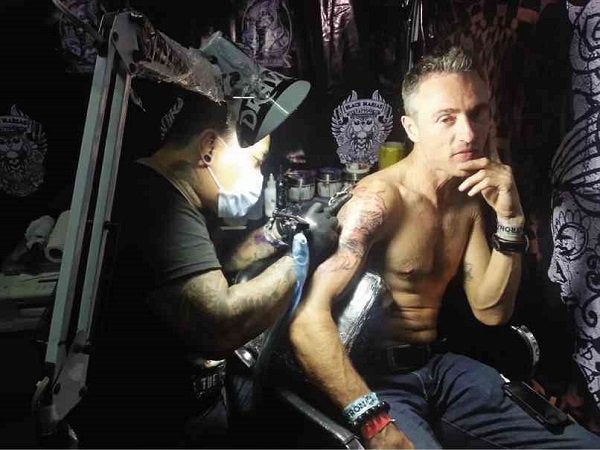 ‘Regrets, I’ve had a few’ – and one of them may be that tattoo

LOS ANGELES, United States — You’re love-struck and can’t wait to have your partner’s name or face etched onto your skin for eternity.

Or you’ve just turned 18, and your first rebellious act upon reaching the age of majority is to have a dragon tattooed on your chest.

Well, you may want to think twice before rushing to the tattoo parlor.

Although studies show that more and more Americans are sporting tattoos (one out of every five adults according to one poll), they also point to an increasing number who end up regretting getting one, leading to a boom in the tattoo removal industry.

“In the last five years, we have seen a marked uptick in the number of people seeking to have tattoos removed,” said Dan Mills, president of the American Society for Aesthetic Plastic Surgery.

According to ASAPS, more than 46,500 Americans underwent tattoo removal in 2015, a 39.4 percent increase over the previous year.

“I see a lot of people having them taken off because they don’t want their children to see them and then go get a tattoo,” said Mills, who is based in the Los Angeles area, considered America’s tattoo hub.

“And some people take them off because a lot of employers won’t hire somebody with a visible tattoo.”

A Harris Poll conducted last fall found that nearly a quarter of people who get tattoos end up remorseful, up from 14 percent in 2012.

The main reasons mentioned for their change of heart, the poll found, are lifestyle or career changes, the breakup of a relationship, a poorly done tattoo or, as one woman put it to AFP, “being young and stupid” when they had it done.

“You don’t think about the rest of your life at that age,” said Gill Crenshaw, 43, an actress, as she waited recently at the Dr Tattoff clinic in Beverly Hills to have two overlaying tattoos on her right arm removed.

“I got it when I was 24 and then as I got older, I realized I was looking in the mirror everyday and just hating it.”

Los Angeles-area realtor Janica Polmanteer, 33, got her “tramp stamp” — or tattoo on her lower back — the very day she turned 18, and has lived to regret it.

Corey Ordoyne, the director of clinical operations at Dr Tattoff’s four clinics in the Los Angeles area, said improvements in laser technology have been accompanied by an uptick in the number of patients seeking tattoo removals.

“We have patients ranging in age from 16 to 70 years old but our largest age group is adult men and women between 25 and 40 years old,” Ordoyne said.

A session typically consists of numbing the area to be treated with anesthetic cream and then using a laser that breaks up the pigment colors of a tattoo with a high-intensity light beam that allows the body to absorb the ink.

Crenshaw winced and writhed in pain as she sat in for one of her tattoo removal sessions. Each one lasts just a few minutes.

Once she was done, aloe vera cream was applied on the tiny blisters on her arm, which was then wrapped in gauze and an ice pack.

“It burns, but by tonight it will be like it never happened,” she said, adding that she looked forward to having clear skin by December — three years after she began the treatment.

Depending on the size of the tattoo and its color, the removal process can take a few months or years.

For Teddy Joe Hayes, 37, his appointment later this month to have his ex-wife’s face removed from his arm can’t come soon enough.

“We were together for 10 years and for her birthday — almost a year ago — I had her portrait done on my arm to show her my commitment to us as a family,” recounted Hayes, himself a tattoo artist.

Only two months later, Hayes said, he discovered that his wife was cheating on him.

“I was like ‘I just got this woman’s face tattooed on my arm and now every day I have to look in the mirror and see the face of the person who betrayed my trust,'” he said.

His advice to clients?

“If it ain’t your kid, if it ain’t your mom or your dad or a close friend, don’t put somebody’s name or face on you,” he said. “Those are the tattoos that you regret.”