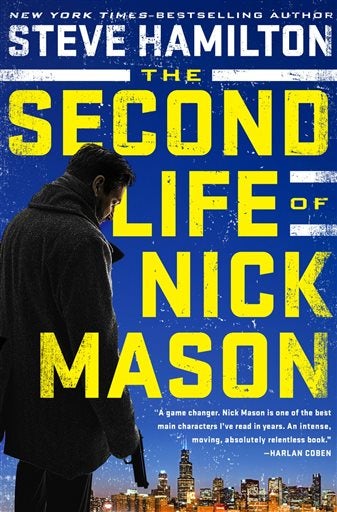 NEW YORK — For a time, Steve Hamilton felt like an escaped convict, like a character in one of his novels.

And all he was doing was switching publishers.

The award-winning crime writer startled the book world last year when he canceled his reported near-seven-figure, four-book contract with St. Martin’s Press just two months before the publication of his novel “The Second Life of Nick Mason” and signed days later (for even more money, reportedly) with G.P. Putnam’s Sons. Hamilton, a two-time recipient of the Edgar Award, had worried St. Martin’s wasn’t committed to promoting his work.

“It felt like … this book was just going to go out there and die,” the curly-haired author said during a recent interview at a cafe on Manhattan’s Upper West Side. “It was just the most horrible feeling to know they were just sending this book out to die.”

With publishers releasing hundreds of thousands of new books each year, authors routinely complain about the lack of attention. But it’s far less common for a writer of Hamilton’s stature to speak out and even rarer to buy back such a large advance just to get away.

Hamilton, 55, had published all of his work with St. Martin’s since catching the attention of the beloved and influential crime fiction editor Ruth Cavin nearly 20 years ago. But Cavin died in 2011 and another close associate at St. Martin’s, publisher and executive vice president Matthew Shear, died in 2013. Hamilton recalled a hostile final meeting last year, with warnings from St. Martin’s that he was ruining his career.

“I hope authors do get a message that it’s OK to bet on yourself,” said Hamilton, who had the support of his literary agent, Shane Salerno. “It’s OK not to settle on second-best.”

A spokeswoman for St. Martin’s, Tracey Guest, said in a statement the publisher has “always been and will continue to be fans of Steve’s. We only wish him the very best.”

“The Second Life of Nick Mason,” which comes out this week, just happens to be about a man sprung from jail. Nick Mason was sentenced to 25 years to life for felony murder, only to be freed after five years through the influence of a crime boss in the same prison. There is one condition: Mason is on call for any “work” — an errand, an execution — needed on the outside.

Set in Chicago, the new book is the first of several planned Mason stories by Hamilton, known to readers for “A Cold Day in Paradise,” ”Winter of the Wolf Moon” and other thrillers featuring ex-policeman Alex McKnight.

“I was just itching to do something different,” Hamilton said. “I wondered what if I tried to create a fully committed career criminal and still have that bond with the reader like Donald Westlake did with the Parker series.”

A native of Detroit, he had always loved crime fiction and cites Raymond Chandler and James Crumley as favorites. At the University of Michigan, he won a Hopwood Award for fiction, but he spent much of his 20s busy with his career as an information developer at IBM and seemingly resigned to being of those would-be writers who never quite gets around to that book.

He changed his luck by changing his life: He joined a writer’s group, which gathered weekly in the basement of the Starr Library in Rhinebeck, New York, around 100 miles north of New York City and not far from Hamilton’s home.

“Every Thursday night there would be six or seven writers in this basement, waiting for me. So now I have to write something for Thursday, got to write a chapter, got to write a story,” Hamilton said.

Hamilton’s “Cold Day in Paradise,” published in 1998, won an Edgar and a Shamus Award for best first novel. He won the Edgar for best novel overall in 2011 for “The Lock Artist,” his acclaimed story of a lock picker traumatized as a boy into silence. Hamilton found a lock expert willing to teach him the trade and still keeps some locks around for practice, calling it a “great way to clear your head.”

Meanwhile, he has enjoyed the camaraderie of the crime writing community, whether talking baseball with Elmore Leonard or listening to Ed McBain share memories of working with Alfred Hitchcock on “The Birds.” Hamilton received blurbs from Stephen King, Harlen Coben and Michael Connelly among others for his new novel.

“The bigger they are, the more gracious and modest and generous they are, like the Lee Childs and Don Winslows and Harlen and Michael Connelly. They just set the standard,” Hamilton said.

He has a theory about why crime writers are easier to be around than literary writers.

“I think because they get to kill people. They get it out of their system,” he said with a laugh. “Sue Grafton said her first book was killing her first husband and she just felt so much better.”

Hamilton, who has been married for 25 years and has two children, tries to restrict any suspense to his narratives. He remained with St. Martin’s after Charles Todd, Laurie R. King and other writers brought in by Cavin had left and stayed with IBM despite his success as an author. When he signed his lucrative deal with St. Martin’s in 2014, he finally gave notice to his longtime employer.

“I went into my manager’s office and sat down with her. I told her that, after 32 years with the company, it was time to leave. She REALLY didn’t want to lose me, so she said, ‘We’ll be happy to match what they’re paying you to stay with us. What would it take to keep you at IBM?'” Hamilton said.

“I gave her the exact total dollar amount on the contract. She looked at me for maybe three seconds, and then she said, ‘OK, Steve! Have a great retirement!'” TVJ