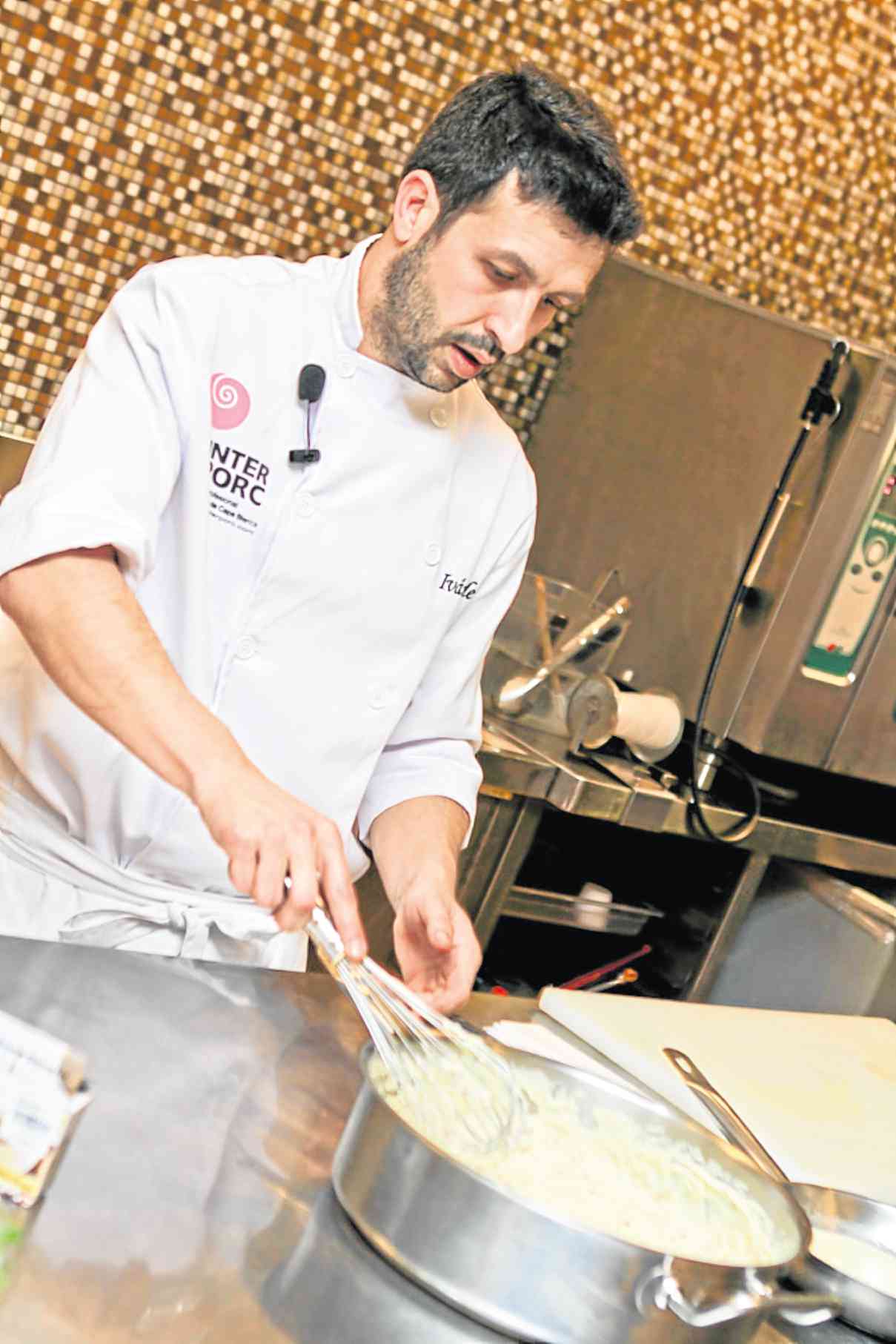 CHEF Ivan during the master class

Tapas–but this time made from Spanish white pig

With so many Spanish chefs in town during Madrid Fusión Manila 2016 in April, it was hardly noticed that, just before that event, one distinguished Spanish chef with a Michelin star was here as well.

Ivan Cerdeño earned the star for his restaurant, El Carmen de Montesión in Toledo. He was in Manila mainly to demonstrate some of his recipes using the Spanish premium pork product from Interporc at Enderun Colleges, and to conduct master classes as well.

In his rapid Spanish delivery, Cerdeño said that Spanish cuisine developed many pork products and recipes because fish wasn’t always available a long time ago. Most of us are familiar with the black pig that produces Spain’s best pork product, the jamon.

Interporc, however, promotes white pig products. While jamon is eaten raw, a friend who came from Spain recently was surprised that she was eating thinly sliced pork carpaccio.

And Cerdeño’s first tapas recipe was pork cubes with tomatoes, the pork cut in cubes from a whole tenderloin marinated for 12 hours, skewered with tomatoes and eaten as is. The long marination, Cerdeño said, is just like cooking the pork.

The chef, however, decided to change his original marinade recipe so products available here could be used. In lieu of green shisho sauce, he used three familiar sauces—soy, oyster and teriyaki. Then he added curry powder, sweet paprika and garlic powder. The skewered pork cubes looked like our barbecue.

From such demonstrations can be learned techniques such as how to make better croquetas de jamon, where the outside is crusty and the inside soft and creamy.

Adding gelatin to the batter is the secret, said Cerdeño. It was noticeable how the chef used non-Spanish ingredients such as panko or Japanese breadcrumbs for croquetas.

Cerdeño went back to his roots, specifically to his grandmother’s cooking with Gachas, a heavy sauce enriched with ham and chorizo and all eaten with bread. He said this was the food of farmhands. But in his restaurant, he decided to redefine and refine the dish so that it became tapas instead, a dip for bread.

When asked what his grandmother said of his version, he smiled and said she had passed on, but added that his mother liked it. His mother runs a restaurant serving traditional dishes, located just beside his own.

What an interesting past and present take on Spanish cuisine.

The road to one Michelin star took Cerdeño through several apprenticeships in outstanding restaurants like El Bohio and the top restaurant today, El Celler de Can Roca. (The Roca brothers also have parents who run a restaurant, and Joan Roca said in his talk at Madrid Fusión Manila that his mother used to tease her sons about having 65 people to serve 45 diners.)

After the demonstration, cocktails were served at the foyer. It was like a continuation of the tapas night organized by the Spanish embassy to begin Madrid Fusión week. Slices of jamon Serrano and cochinillo were taken with good wines— Pata Negra Ribera del Duero and Mayor de Castilla Verdejo —along with fat crisp churros dipped in thick chocolate.

Food really is the better way to introduce culture. Serving was put on hold for a while when the documentary on Spanish tapas was shown, but that didn’t stop people from collecting what they wanted to eat, to the consternation of some organizers. Well, pictures can be great, but tasting the real food is better.

Of course, the wines and beer were flowing. The only exercise one had was to go to the next table which offered more drink or food, or to stand and wait one’s turn at the long lines at the jamon carving stations.

It was a filling reminder that, days after, food for the mind would be served during the Congress—an exchange of ideas about ingredients and techniques among chefs from Spain, Mexico, Peru, Korea and the Philippines.