The Heart of the Filipino in LA | Inquirer Lifestyle ❮ ❯ 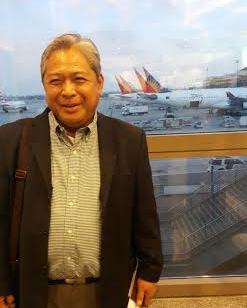 The Heart of the Filipino in LA

Lunch at Shangri-La Mactan before Philippine Airlines’ (PAL) inaugural nonstop flight from Cebu to Los Angeles was part of the preamble of good things coming.

Summer was sizzling outside the Ocean Pavilion where a specially prepared lunch buffet had been spread. It was the Equinox hour, though the sun high above was poor competition for the warm welcome extended by general manager Rene Egle and his team.

Italian chef Alessandro Dal Sotto was carving slices of Parma ham from a gondola ham stand in a station where different cheeses shared stellar billing with the leg of cured meat.

Alongside, Indian chef Raf offered flavors of India beside the sushi and sashimi served over ice.

The Japanese selections were as enticing as the seafood but this was Cebu, and dominating one section was a glistening roast pig with the reddish brown skin that crackled at first bite, releasing infused flavors of lemon grass, pepper corn, garlic and soy sauce.

Communications director Cassandra Cuevas had thoughtfully arranged the use of the hotel’s presidential suite for the group to freshen up after lunch before going to the airport for the 13-hour flight to the West Coast.

The spectacular view in the relaxing accommodations set off our mental note to book a longer stay at the Shangri-la Mactan at the next opportunity.

It had been a couple of years since our last visit and the Mactan Cebu International Airport was looking up. Besides improvements in the existing facility, the processing from immigration to customs was an easy walk-through sans long queues.

The airport lounge had exceptionally good coffee, an Italian brew, and kiosks outside had delicacies for last-minute buys.

Having decided against adding the weight of chocolate-covered mangoes to the hand carry, we were delighted to have them onboard PR 122. When  purser Ernie Rio noted our pleasure with each taste of the diminishing portion, he brought even more, and later, a small gift box of the same. It was unsolicited and a hallmark of the exceptional service aboard PAL.

Having just flown the national carrier’s direct flight to London and tasting everything on the menu, we anticipated our in-flight meals. The travel dining ritual included arroz caldo and the gourmet tuyo and bangus in olive oil.

Cabin services manager Marge Angeles, who was overall in-charge of the special flight, made sure that the passengers’ needs were anticipated, right down to the big bottle of water that was copiously consumed for hydration.

Pacing the hours to adjust to the 5:55 p.m. arrival at the Tom Bradley International Terminal, we set the push button on recline for a restful sleep, snuggled in the A343 Jet seat. Hours later, there was time to watch a film after breakfast and still freshen up before stepping out to an LA evening.

Home for the next few days was the SLS in Beverly Hills, a tony hotel with character and reputedly the best in the county. The aesthetics of Philippe Starck resonated, from the open veranda with the gilded silver old-fashioned swivel office chair behind a glass desk to clusters of eclectic furniture upholstered in white leather or fabric.

A long table stretched the length of Tres by José Andrés, the restaurant with a well-curated breakfast menu. It was the giveaway for the design inspiration. A Moooi horse lamp and a Moooi pig table stood between concierge and the reception.

The elevator doors opened to the fifth floor lobby with a pool table and more Starck elements; an arm chair and three different footstools with a lampstand in the shape of a rifle.

Our room 507 was a sanctuary of contemporary space and indulgences. The cristalleries in the bathroom shelf alone raised the standards of amenities in a luxury hotel.

There was time for a quick dash to the Beverly Hills Center, 10 minutes away, before dinner with PAL president Jaime Bautista. Throughout our stay in LA, he and his team were the hospitable hosts who took no request as a small matter.

Even as communications head Cielo Villaluna was occupied with event preparations, she extended the signature care relaunched in PAL’s new brand campaign, and so did vice president for marketing Ria Domingo and the other officers who attended the dinner reception the following evening at the Albert Ballroom on the ground floor.

During cocktail hour, the Cebu lechon made a stellar appearance, quickly vanquished by appreciative guests. No less than the executive chef, Octavio Sabado, was artfully carving the roast, much to the surprise of his colleagues. He opted to do the task, responding to the strains of his Filipino lineage.

A dance troupe performed before the courses were served. Brief remarks by PAL officials and the Philippine consul in LA followed videos that presented PAL’s “Heart of the Filipino” campaign. It was the best of the Philippines bannered by the airline bearing the country colors.

PAL had arranged a day tour to Palm Springs Aerial Tramway for some snow sighting and views of the Chino Canyon from 8,516 feet up. Lunch was at cloud level at the Peaks Restaurant before our descent to retail fun at Cabazon Outlets.

On the last morning in LA,  a Sunday, we took a brisk five-minute walk to Our Lady of Mt. Lebanon to make it to the 9 a.m. service. It was a good way to end the visit.

At the airport, during departure, there suddenly materialized a memorable parting shot—two PAL aircraft came into view, framed by the glass windows. It was a moment that needed to be captured.

Bautista gamely obliged our request to photograph him with the planes as background. As he stood, the man of the hour smiled broadly, saying that this was just the beginning.

He said that in the near future, more PAL aircraft would be lined up on the LA tarmac and several airports in the United States, Europe and other parts of the world.

Even as he smiled, it sounded like a promise that was already coming true.