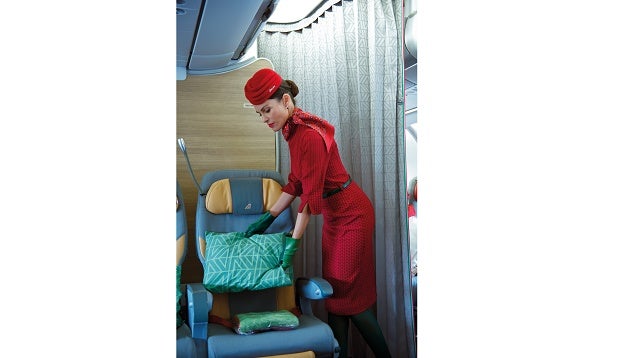 Italian haute couturier Ettore Bilotta took inspiration from Italy’s rich culture and heritage when he designed the Alitalia collection, which was unveiled in a catwalk show at the Nationale Spazio Eventi in Rome. Photo from Alitalia

The so-called golden days of Italian fashion in the 1950s and 1960s marked the new staff uniform collection of an airline brand.

Italian haute couturier Ettore Bilotta took inspiration from Italy’s rich culture and heritage when he designed the Alitalia collection, which was unveiled in a catwalk show at the Nationale Spazio Eventi in Rome.

“Being given the opportunity to design the new uniforms for this much loved Italian symbol was very exciting and gave me the opportunity to create a special collection which symbolizes Italy and our pride in Alitalia as its ambassador to the world. Alitalia is one of the most recognized airline brands in the world and I had to deliver something truly special,” Bilotta said.

Bilotta studied Italian architecture and lifestyles and drew inspiration from landscapes. He based the new hat design on the terraces Cinque Terre on the Italian Riviera, which “exudes a style inspired by the glamorous 1950s and 1960s, when women always wore elegant and beautiful hats and gloves.”

“Working closely with Alitalia on every aspect of the design process was crucial. This ensured the whole project was created, managed and completed in Italy by Italians, and to showcase the arts, culture, people, design and landscapes of this great country,” he added.

Alitalia CEO Cramer Ball said the uniform’s new look was part of the airline’s “journey of renewal and growth,” noting that their aim was to produce a collection that would “represent Italian excellence around the world.”

“This is a country at the forefront of global style and design. The new uniforms complement the renaissance of the Alitalia brand and the rejuvenation of its aircraft fleet and products for its customers,” Ball said.

Bilotta used the color red to symbolize “Italian passion,” and green to represent Italy’s countryside. Accessories such as ties, cardigans, belts, shoes and waistcoats also used modern Italian contemporary and classic design elements “to create items which are in vogue.”

“For female cabin crew uniforms, a burgundy slowly changing to a lighter red was achieved by using a chevron print design. For female ground crew, a charcoal grey gradually changing to green was also realized using the same print design. This design process is followed on each garment, including a white blouse features tapering chevron print columns in red for cabin crew and green for ground crew. All females receive three options—a one piece dress, a two piece jacket and skirt, and a trouser option,” Alitalia said in a statement.