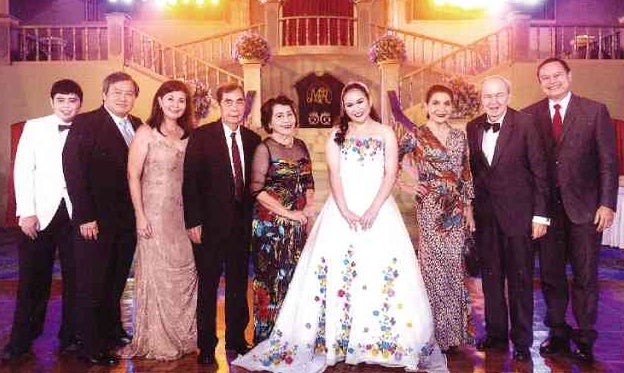 It was held at the spacious marquee of the Shangri-La’s Mactan Resort and Spa with the attendance of numerous friends and relations all in formal evening finery. They gathered at the foyer to sip cool drinks while a troop of acrobats and jesters performed all over.

At a given moment the doors to the ballroom opened, much to everyone’s relief as the night was a bit sultry. The setting could have been in some fairytale land, with special accent on Cinderella’s fateful ball.

The fantastic décor included a grand staircase where most of the evening’s drama evolved. From the center of the ceiling came dozens of yards of white tulle, lit up by myriad crystal chandeliers interspersed with garlands of white orchids.

The traditional cotillion was danced, but breaking tradition, proud dad Jo-En did a disco number with Mary Angeli that wowed everyone. The applause and cheers were deafening.

Young swains, 18 of them, each with a long stemmed red rose for Mary Angeli, took turns dancing with her until her arms were filled with the flowers. Eighteen girls also had their part in a video in which they wished Mary Angeli well and recalled about happy days in her company.

Winson Chan, dressed as a court chamberlain, white wig and all, announced the various highlights of the festivity. Val Sandiego and his dance company performed a well-coordinated program of dances in splendid royal costumes.

Amparito Lhuillier was present, sharing a VIP table with Julius and Nelia Neri, Bunny Pages, Marco and Mariles Nable and their son Gabe.

Axis Entertainment at Vibo on Escario Street had a grand inaugural—as the invitations said, with cocktails and fine food under the stars. Cebu City Mayor Mike Rama cut the ceremonial ribbon beside Flora Villacarlos Borromeo who owns the extensive property where it is located.

Assisting them were Flora’s children Dindo Borromeo who is at the held of the multifaceted concern and Camille Borromeo-Suarez with her husband Allan Suarez.