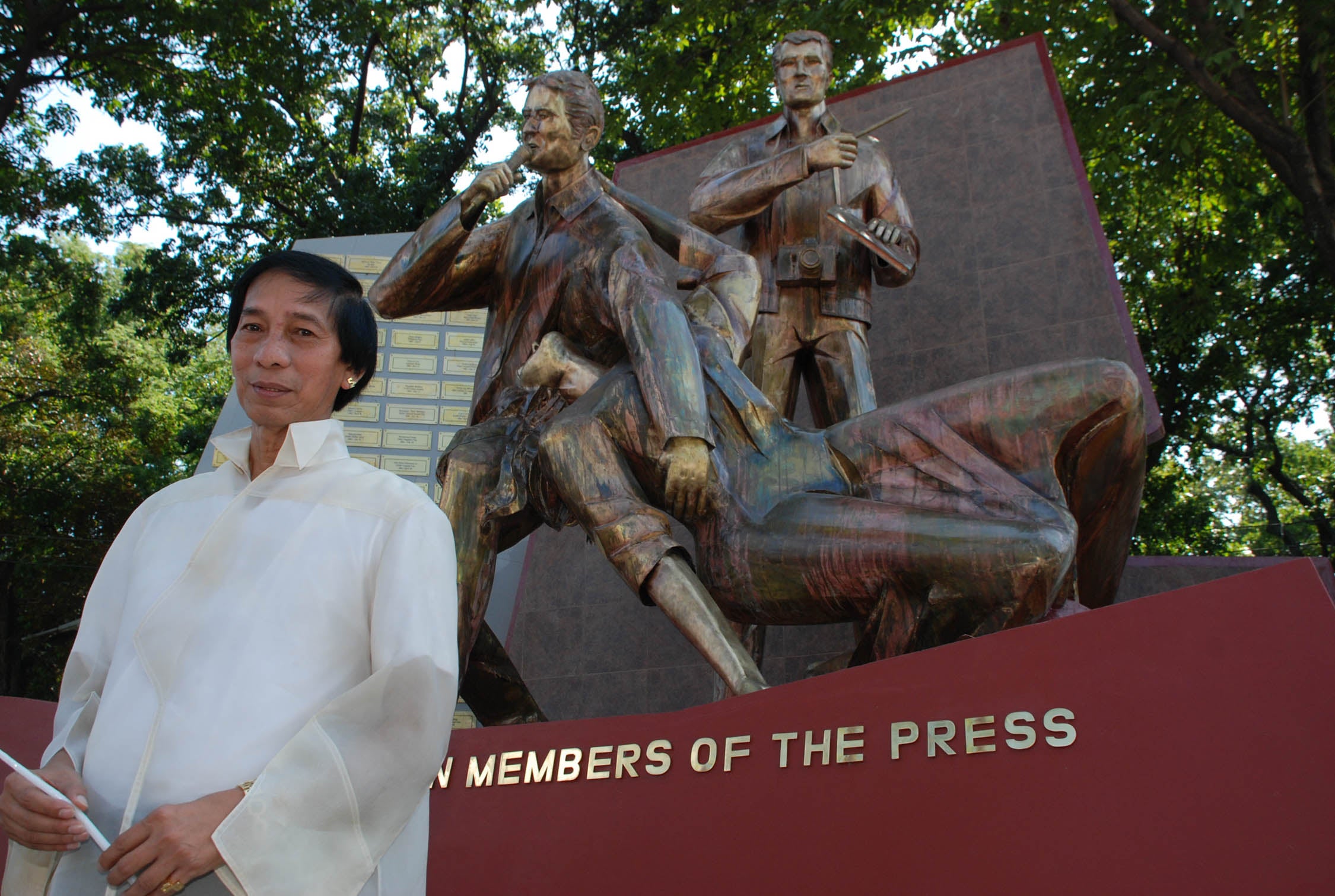 CASTRILLO during the unveiling of his Press Freedom monument

SINCE his untimely death at 73 due to cancer on May 18, there have been reports of “Ed Castrillo” being spotted here and there. He was seen, for instance, at La Loma Cemetery. He has been seen elsewhere in the archipelago. There have even been reports of him being sighted overseas.

Of course, one may remark, like Hamlet, “There are more things in heaven and earth, Horatio, than are dreamt of in your philosophy.”

But rather than ghosts whose existence (or non-) lie beyond the grasp of human knowledge, what we mean here by sightings refer to his works, sheer plentiful and ubiquitous.

The ubiquity of the works should afford Castrillo the power of bilocation or multilocation, a phenomenon ascribed to saints and mystics.

One is tempted to say Castrillo is not only multilocationary but also omnipresent. Save that omnipresence is ascribed to God.

Castrillo’s works are hardly phantasmal and ineffable like ghosts. They’re hard, solid and concrete. And monumental.

So what was seen in La Loma? Not his ghost but Castrillo’s first installation, “The Virgin,” his first among his many Marian monuments here and abroad.

Erected in 1966, the sculpture in La Loma is marking its 50th anniversary this year. Which means 2016 also marks Castrillo’s 50th year as a professional artist.

Sadly the milestone has been replaced by gravestone.

Yet, as the cliche goes, the artist lives on in his works.

Tens of thousands of daily commuters and motorists from south of Manila braving the heavy traffic of the coastal road and Roxas Boulevard will spot one Castrillo statue after another, either nationalist or religious, notably “Rajah Soliman” and “Nuestra Señora de Remedios” in Malate and “Nuestra Señora de Guia” in Ermita.

At the Manila reclaimed area, in Sofitel Hotel, in what many foodies say is the best and most varied (and most expensive) buffet in town, is Castrillo’s beautiful geometrical work, “Spirals.” It is the name of the restaurant itself.

At the Luneta Park are the light-and-sound tableaux of the last days of Jose Rizal, a favorite of families and promenaders.

At the farthest end of the boulevard north, travelers may enter the walls of Intramuros and come upon the main gate of Pamantasan ng Lungsod ng Maynila and encounter Castrillo’s monument of MacArthur’s return.

The Manila Cathedral itself may house a Castrillo since it was there he first learned liturgical art when, as a high school student of Don Bosco Technical School in Mandaluyong, he assisted its refurbishing during the time of Cardinal Rufino Santos.

Across the cathedral is Fort Santiago where Castrillo’s “Youth’s Cry of Defiance” is mounted.

On the other side of the Pasig are the statues of Manila Mayor Arsenio H. Lacson behind the Santa Cruz Church, “Cry of Tondo” near the Tondo Church, and Our Lady of Loreto at Bustillos near Mendiola Street.

Makati office workers along Gil Puyat Avenue daily pass by one of Castrillo’s secular monuments—“Pillar of Growth” on Metrobank Plaza. At RCBC Plaza is the “Spirit of Edsa” monument.

At traffic-jam-prone Edsa is the original “People Power” monument. Meanwhile, the Edsa Shrine has several of Castrillo’s liturgical works, notably the highly dramatic ciborium in the Perpetual Adoration Chapel.

In the Visayas, there’s the “Cebu Heritage,” a monument to both nation and faith. Also at the Crown Regency Hotel, one can find one of Castrillo’s “hammer” works—the embossed-copper relief-like tableaux of the history of the Santo Niño de Cebu.

In one of the Boracay hotels is another embossed-copper work of Castrillo, “Ripples of the Sea.”

In Mindanao, there’s a monument to press freedom at the Misamis Oriental provincial capitol grounds Castrillo erected in 2009, ironically a few months before the Maguindanao massacre that killed 32 journalists.

Despite the literal monumentality of his works, Castrillo also delved into micro works. To him, size does not matter as long as it’s art.

Castrillo, in fact, started as a jewelry designer. Even if he was busy with commissions for monuments, he was designing jewelry and accessories, including the Spanish peineta and the lowly tie ring.

He was clearly ahead of his time.

Even before Federico Aguilar Alcuaz pitched his studio at Manila Hilton, the hotel was already hanging a Castrillo hammer-out commissioned by the Delgado Bros., owner then of the hotel and Castrillo’s benefactor who sent him to the University of Santo Tomas, the cradle of modern art in the country.

At UST, Castrillo did sit-ins in classes in chemistry and engineering to learn about metals, alloys and other potential art mediums. He delved both into the art and science of craftsmanship.

Like Paco Rabanne, who started as a jewelry designer, Castrillo did exquisite body armor and collaborated with fashion designers,

The artist even collaborated in a concert in the late 1970’s with Celeste Legaspi, with the singer’s repertoire built around Castrillo’s abstract forms and geometic designs.

The fact his works were utilized in stage productions should underscore their dramatic potential.

Castrillo’s works, whether figurative or abstract, constituted a sculptural dramatics.

His sculptural poetics had been shown early on in his monuments for the Loyola Memorial Park in Parañaque, notably “Pieta” and “Redemption.”

The former work is a “fan” remaking of Michelangelo’s famous work at the Saint Peter’s Basilica. It recasts in modern brass the Florentine master’s marble tour de force.

Alice Guillermo said that when the sculpture was unveiled, it jarred the public.

“It took some time for the viewer to understand the principle of its jagged, disjointed planes,” she recalled.

Guillermo explained that, for Castrillo, it would be a “disadvantage” to repeat the classical ideals of Michelangelo’s work.

“Thus, he made instead a definitely anti-classical Pieta with a shift in emotional content,” she wrote. “Contrary to the mellifluous classical form, the angular, jagged metal planes conveyed a tragic sense of loss, an alienating truncation of life that separated Son from Mother.”

But his sense of drama would not have sufficed if Castrillo didn’t really have at heart the sentiments that fired both his nationalist and religious works.

The modern spirit is essentially agnostic and even atheist, narcissistic and individualistic. But Castrillo, fervent in his nationalism and faith, would have none of that.

In one interview with this writer, Castrillo called his “nationalist sentiments and faith” his “intrinsic values.” From them would come the “fruits” of his work.

“Anything I create,” he pointed out, “is practically the output of my belief.”