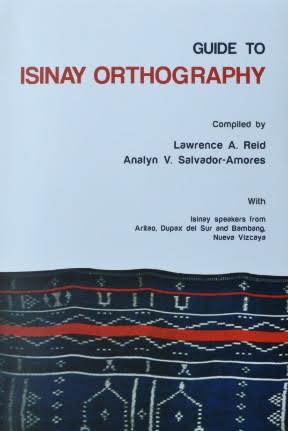 A CAMPAIGN to save and revitalize the dying culture of the Isinay ethnolinguistic group in Nueva Vizcaya province is well on its way with the recent launch of a book on their equally disappearing language.

Published by UPB’s Center for Cordillera Studies, it was launched on March 22 at the university’s main lobby, with a number of the remaining Isinay speakers attending.

According to the last Ancestral Domain Areas Census Report in 2012, as quoted by the book, there are only about 12,500 Isinay speakers in the three aforementioned towns, although it is also spoken in some villages of Kayapa and Santa Fe municipalities.

Reid says the book is a prelude to an Isinay dictionary they are working on. Salvador-Amores hopes to inspire other groups to do their own orthography with this historic publication.

Bangunan revealed that half of the Isinay population in Bambang could no longer speak their dialect, but hoped through exerted efforts the language would be revitalized.

“Hopefully we should join hands in reviving the Isinay culture not only in Bambang but throughout Nueva Vizcaya and possibly throughout the world,” he said.

Bayani Larosa of the Isinay tribe of Aritao hoped their language would be saved and revived.

“I fear that a day or year might come that the language would die; but I dreamed that someday, somebody would come to save the Isinay language, and it came through Dr. Reid and Amores who did hard work in the Isinay orthography,” he said.

“Today, my fear ended because my dream came true,” added an emotional Larosa, who exclaimed, “Mavilay (long live) Isinay!” after his speech.

Alvin Felix, an Isinay and heritage advocate from Dupax del Sur, congratulated everyone for the exemplary work and prodded his fellow Isinays to keep the patience in the rediscovery and revitalization of their language.