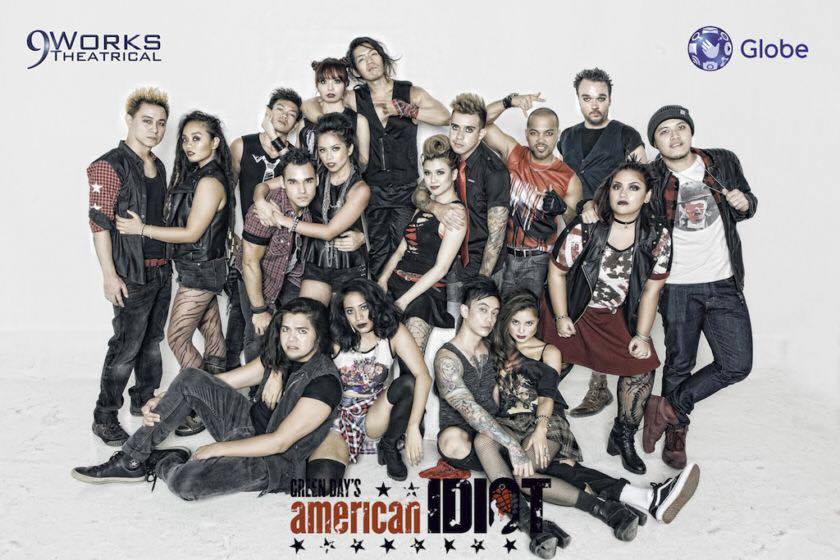 ‘American Idiot’: Where the best of Filipino rock music and theatre converge

This production will set the stage to introduce the dynamic and innovative space that is the Globe Iconic Store as a theatrical and entertainment venue with unlimited possibilities.

“American Idiot” follows the story of three friends stuck in suburbia, disillusioned and disenchanted with the world. They decide to take a trip through post 9/11 America and instead, face the harsh realities of life after war.

The play is sung-through, much like an opera, using the music of rock giants, Green Day to tell the story. With its themes of youth in revolt and the songs written from a rock perspective, 9 Works Theatrical decided to position rock stars alongside theater veterans to properly embody this story.

Leading the cast are Jason Fernandez (as Johnny), Miggy Chavez (as Will) and Nel Gomez (as Tunny).

Jason Fernandez was the lead vocalist of Rivermaya from 2007 to 2011, and the Season 2 Finalist for “The Voice”.

He recently released a solo album and has appeared in television shows like “ASAP20,” “Doble Kara” and “Maalaala Mo Kaya”.

Miggy Chavez is the lead singer of Chicosci and had his film debut in the movie “Segunda Mano.”

Nel Gomez has nine years of experience as a professional actor with 18 productions under his belt, including 9 Works Theatrical’s award-winning production of “Grease,” “The Glass Menagerie,” “Romeo & Juliet,” among others.

Popular rock vocalist Basti Artadi of Wolfgang also joins the cast as the sinister St. Jimmy, while two-time Aliw award nominee for Best Actress in a musical, Yanah Laurel, will play Whatsername, a mysterious woman who captures the imagination of Johnny.

Playing Will’s girlfriend Heather is Alex Godinez, who has spent six years as a working actor in Hollywood and whose Philippine theater resume includes High School Musical and 9WT’s Grease. Playing the role of Extraordinary Girl is Ela Lisondra, a Disney Paris, Disney Hong Kong, and Miss Saigon alumnus, who won the 2013 World Championship in the World Salsa Championship.