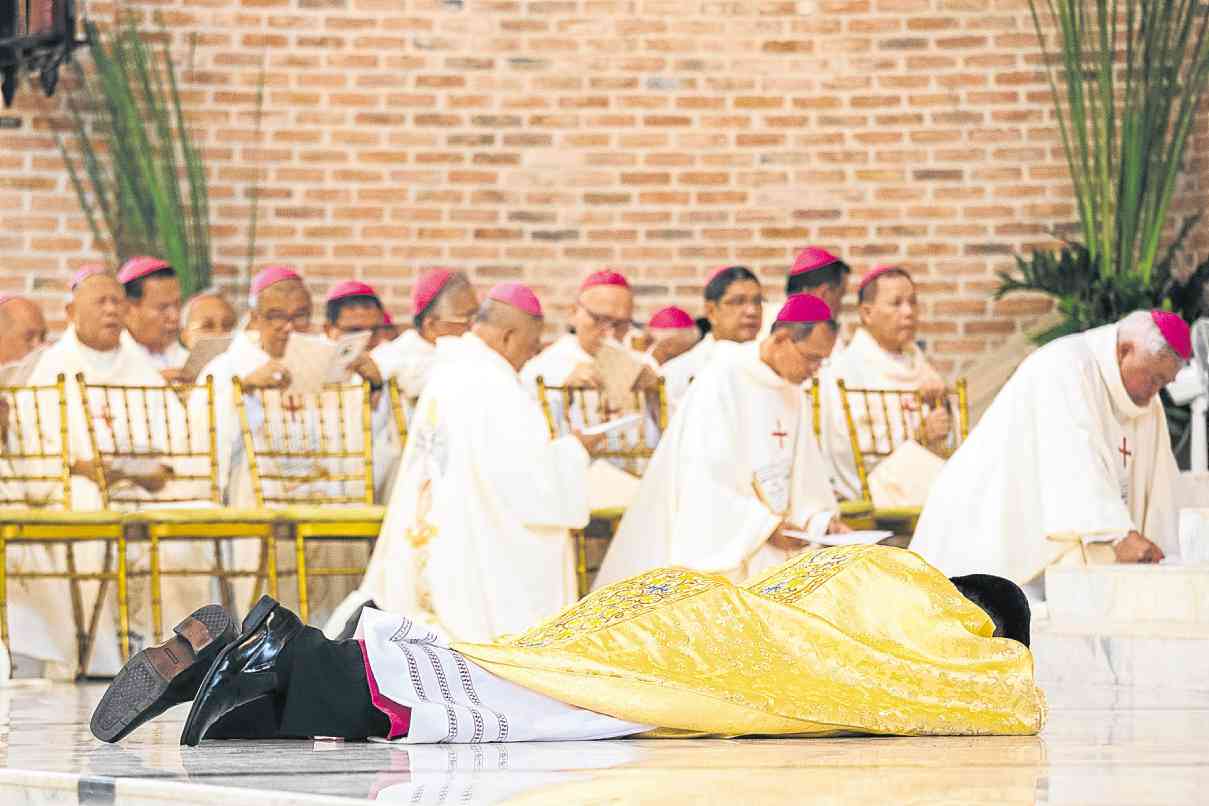 Macaraeg lies prostrate at the St. John the Evangelist Cathedral during his episcopal consecration.

WHEN Fr. Enrique V. Macaraeg was consecrated bishop on May 24 at the Cathedral of Saint John the Evangelist in Dagupan City, Lingayen-Dagupan Archbishop Socrates Villegas, the principal ordaining prelate, made striking analogies from the fact that the new member of the episcopacy hailed from the town of Malasique, from the Pangasinan word “lasi,” meaning “lightning.”

Vicar General of the Archdiocese of Lingayen-Dagupan and parish priest of Malasique until the Holy See announced on March 31 his appointment by Pope Francis as  the new bishop of Tarlac, Monsignor Macaraeg will face struggles—he will be literally struck by lightning, said Villegas.

But Macaraeg, added the archbishop, need not fear especially since some noisy lightning “don’t kill.”

It was just about the slightest and most general reference Archbishop Villegas, who’s also president of the powerful Catholic Bishops Conference of the Philippines (CBCP), had made in connection with the raging issue last week—presumptive President-elect Rodrigo Duterte haranguing the Church for its “hypocrisy” and her opposition to contraception and the reimposition of capital punishment.

In the din and blare of a vicious harangue by a verbally abusive incoming president, the ordination seemed a baptism of fire for Macaraeg.

But it helped perhaps that many bishops were there to assist in consecrating Macaraeg to the episcopacy. After all, Villegas  and his predecessor as CBCP president, Archbishop Jose S. Palma of Cebu, had made the same vow when they were ordained bishops—“to discharge until death the office entrusted to (them) by the Apostles.”

Save for St. John the Beloved, all of the apostles were martyred. St. Peter was, in fact, crucified like Christ but upside down. Macaraeg’s episcopal motto is “Vivere Christus est! (To live as Christ)”—from Paul’s Letter to the Philippians, 1:21. Even Saint Paul was martyred.

Macaraeg added he also got congratulations and assurances of prayers and support from his batchmates at the University of Santo Tomas Central Seminary—Auxiliary Bishop Oscar A. Solis, the first ethnic Filipino to become a bishop in Northern America, and Bishop Jose Corazon T. Talaoc of Kalibo, Aklan.

His own episcopal coat of arms refers to the martyrdom expected of Christian elders.

At right, the upper part refers to the Lingayen Gulf. The color refers to the bloodshed during World War II, especially the landing of liberation forces. The color also symbolizes the sacrifices of Pangasinan Catholics across the centuries in order to remain true to the faith.

A flash of lasi or lightning cuts the red part. “Malasique” means a place of “intense lightning.” So intense is the lightning that the light of the Gospel has become rooted, as proven by the town’s son becoming bishop, according to Villegas.

During his episcopal ordination, the Litany of Saints was sung and invoked were not only Saints Lorenzo Ruiz de Manila and Pedro Calungsod, but also Spanish friars who had worked in the Dominican missions in Pangasinan before they were martyred abroad.

They included Saints Domingo Ibañez de Erquicia and Angel Ferrer de Orsucci who were killed in the Christian persecutions in Japan in the 17th century. The latter is considered the founder of Mangaldan town in Pangasinan where his image is venerated at the local Santo Tomas church.

Saints  Francisco Gil de Federich and Domingo Henares were martyred in Vietnam in the 18th century.

Meanwhile, Beatos Jose Garcia Diaz and Candido Fernandez Garcia were martyred during the anti-Christian persecutions by the Republicans and Communists in the 1930s that triggered the Spanish civil war.

Monsignor Macaraeg will need the prayers of the faithful and the intercession of Pangasinan saints to confront the challenges awaiting him in Tarlac.

Tarlac is one of the biggest and richest dioceses in the country, richer than some archdioceses in fact. The diocese covers the entire civil province of Tarlac, with a territory of 3,054.4 sq. kms. and a total population of 1.2 million of whom 887,000 are Roman Catholics.

But its affluence has also made Tarlac socially complex, with its troubled history of land tenancy and agrarian unrest, and political dynasties that have dominated not only the province but also the nation, especially “the Aquinos of Tarlac,” as Nick Joaquin would put it, and their relations from the Cojuangcos and their rivals (and former allies) from the Yaps, the latter now in control of the provincial capitol.

The Cojuangcos have extended their political and economic influence southward to the Visayas, especially Negros Occidental, and northward to Bishop Macaraeg’s home province of Pangasinan, where a Cojuangco challenged last May 10 the Espino dynasty for the governorship (the Espinos retained the capitol).

Of course, Tarlac is the home of two presidents and a national martyr. One of the presidents is about to leave Malacañang and has had sometimes icy, sometimes adversarial relations with the Church during his incumbency, and Bishop Macaraeg will most certainly bump into him in Tarlac.

But Msgr. Macaraeg told  Inquirer he was taking everything in stride. His clerical colleagues and his classmates at UST said “Father Ric” had always been unflappable, serene, soft-spoken and self-effacing, both a man of ministry and a man of spirituality. He will not only survive but prevail, quietly and with no fuss.

Msgr. Enrique Macaraeg y de Vera will be installed the new  bishop of the Diocese of Tarlac at the San Sebastian Cathedral in Tarlac City on May 31.