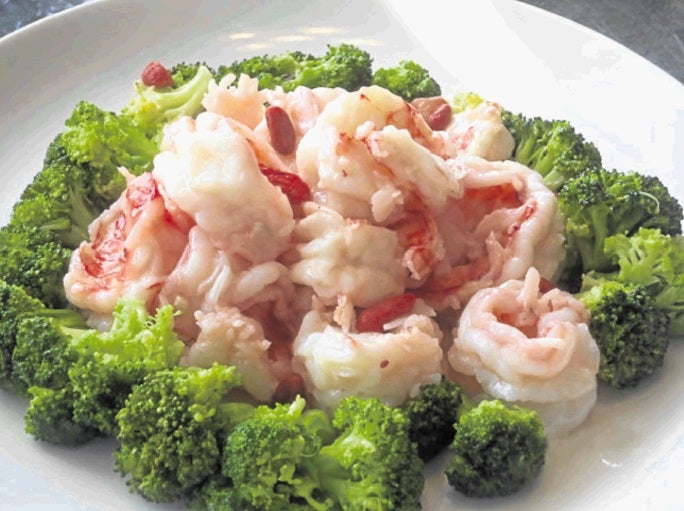 Believe it or not–Chinese food made healthy

Healthy eating and Chinese cooking may sound like a contradiction, but not in the hands of Leung “Ken” Chi Kwan, chef of Lung Hin restaurant in Marco Polo Hotel Ortigas.

At a recent press lunch, he presented some of the dishes he created for Lung Hin, which was awarded one of the most outstanding Chinese restaurants outside of China at the recent 16th China Hotel Industry Golden Horse Awards in Guangzhou.

Chef Ken said he made the menu balanced to make it healthy. Thus, every dish has a nutritious ingredient, like tofu, for instance. Deep fried to a golden hue, the cubes of crispy tofu were served with a mound of shredded cabbage and seaweeds laced with a tangy dressing.

Truly comforting was an emerald green soup, the color made possible by roughly chopped spinach leaves floating in a rich broth along with lumps of shrimps and other seafood.

The delicate curls of stir-fried shiny prawns were surrounded by bright green broccoli florets. It seemed as though the dish was making a statement: Eat your vegetables before you eat your shrimps.

A dish of ham and vegetables, on the other hand, was made healthier with the removal of fat from the ham.  And though this made the broth lighter, it was still tasty because of the long, slow simmering of the broth.

Even the deep-fried pork spare ribs were given a healthy touch—underneath the slabs of ribs were shreds of lettuce, cherry tomatoes and cucumbers.

In addition, less sugar is used for the delicacies whenever possible. Not only less sugar but also less rice is used for the buchi, for example. As a result, the glutinous rice balls were lighter, with a puffy airy texture that made them more appealing.

Chef Ken also makes it a point to go with the season. Ingredients may change depending on what’s fresh and seasonal. To keep up, he regularly checks the markets in Hong Kong, where many of the ingredients are sourced.

Despite the innovative touches, the dishes in Lung Hin remain authentically Cantonese, said chef Ken. Still one of the bestsellers is the Peking duck, crisp roasted duck with a golden burnished skin served with paper thin Mandarin pancakes.