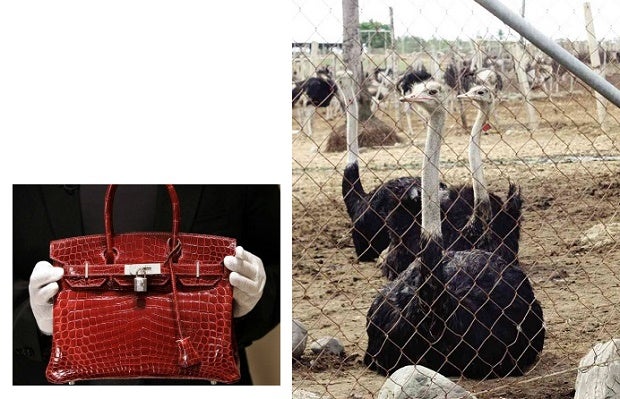 PARIS, France — Hermes was thrown onto the defensive on Tuesday over claims of cruelty at a farm that allegedly supplies skins used in its luxury handbags, the second such allegations in a year.

A spokeswoman for animal rights group PETA used the French fashion house’s AGM in Paris to grill Hermes CEO Axel Dumas about a video showing ostriches being slaughtered at a farm in South Africa.

PETA France spokeswoman Isabelle Goetz, who bought a share in Hermes to secure a seat at the AGM, condemned the suffering of ostriches at the farm which she called an “exclusive Hermes supplier”.

“Will Hermes some day stop using exotic skins?” she asked Dumas and other members of the group’s board, in front of hundreds of shareholders.

Dumas insisted that Hermes had “no exclusive ostrich supplier” and said the company “fully meets its responsibilities in its partnerships with farms with which we work”.

“We ask all our partners to not only respect international laws but also Hermes’ rules, which are much stricter,” he said.

The PETA video, which was published online in February, shows an ostrich being rammed into a pen to be stunned and then having its throat slit in front of other birds.

A worker at the farm told PETA the facility supplied skins used by Prada as well as Hermes.

In a statement at the time, Hermes said it sourced its ostrich leather from tanneries, which were regularly vetted by the company, and not directly from farms.

Hermes was thrust into the spotlight last year by a PETA film exposing maltreatment of crocodiles and alligators at farms in Texas and Zimbabwe.

In the wake of that expose, British singer Jane Birkin asked Hermes to remove her name from its iconic crocodile-skin Birkin bag.

Hermes said it was “shocked” by the images and promised to investigate the allegations.