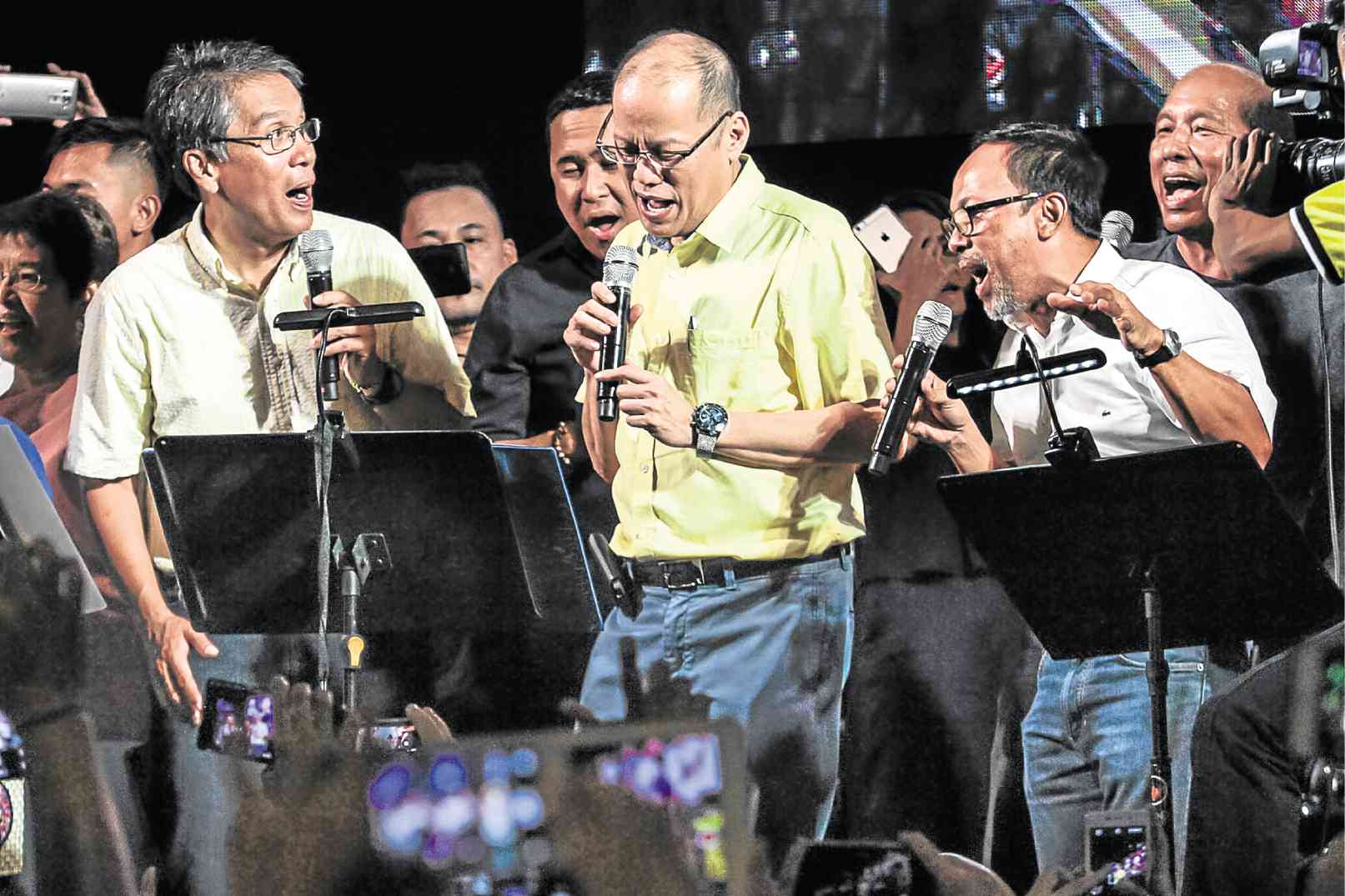 He could have sung and danced all night.

Letting his hair—or what’s left of it—down, a peppy President Aquino turned the thanksgiving gathering of the Liberal Party (LP) on Wednesday night into his own concert-cum-videoke session.

Mr. Aquino, also the chair of the decimated ruling party, stole the spotlight from his close friend, defeated LP presidential candidate Mar Roxas, who threw the street party-themed event for his supporters at the parking lot of the LP headquarters in Cubao, Quezon City.

An LED screen beamed Roxas’ image beside the words “MARaming salamat! To all who fought the good fight!”

But it was a victory party, too, as LP vice presidential candidate Leni Robredo emerged victorious, though by a slim margin and amid unproven allegations of electoral fraud.

“Eat and drink, enjoy the party,” Roxas told everyone as he went around.

The food trucks around the venue offered not-so-ordinary grub. One of them was Sweet Ecstasy, the burger joint on Katipunan Avenue near the Ateneo campus in Quezon City where Roxas went after conceding defeat in the presidential election.

Even the beers were special. One of several local craft brands, Joe’s Brew, had an exquisite taste.

Belting out upbeat disco music of the 1960s and ’70s and jigging to the new wave hits of the ’80s, Mr. Aquino flashed the rarely seen lighter side of the 15th President of the Philippines during the four-hour gathering.

“Do you want to dance or do you want to cry?” the President told the adoring crowd of about 3,000. “Don’t blame us if it rains suddenly.”

As if telling the audience that he was also into the music of the millennials, he said he wanted to sing Bruno Mars’ “Uptown Funk.”

The President, in a yellow short-sleeved shirt like Roxas, was all smiles when he arrived at about 7 p.m. under the usual heavy security.

He wanted to eat some Mongolian barbecue, but was mobbed by people who wanted to take selfies with him.

The next moment, the President and Roxas were jamming on stage with outgoing members of the Cabinet.

“Do you like the band’s performance? Do you want to hear somebody who sings better? Who do you want to sing next?” Roxas asked the crowd.

“I heard you. So come here Mel Sarmiento and sing for us,” the President said as he handed the microphone to Interior Secretary Mel Senen Sarmiento, the LP’s secretary general. “It’s Mar who should sing because he’s our candidate.”

“This is not an audition for our next career,” Roxas quipped.

Mr. Aquino seemed hesitant at first to hold the microphone as Roxas asked him what he wanted to sing, pointing instead to Social Welfare Secretary Dinky Soliman.

But as it turned out, the outgoing President was what videoke enthusiasts call “alumnus of AIM” (Ayaw Ibigay ang Mic), referring to someone who hog the microphone.

Amid the cheering from the crowd, Mr. Aquino opened the “first set” with Bee Gees’ hit “To Love Somebody,” which he sang with Roxas, Soliman and Sarmiento.

After four songs, Mr. Aquino left the stage, but came back moments later for another round of singing. He was joined by his favorite folk-song artist, Noel Cabangon.

“We dedicate this to Tita Judy Roxas,” the President said, referring to Roxas’ mother. “She has been our inspiration.”

Besides being good at singing, Mr. Aquino also showed that he had a good sense of humor, as he joked around with Abad who, he said, used to sport long hair like a rock star.

“But he lost it because of too much (headbanging),” the President said.

The budget secretary obviously enjoyed the night, as he swayed to the dance music on stage holding a bottle of beer.

When he noticed that they were off-tune in singing Mike Francis’ “Let Me In,” the President told the band: “Let’s stop this. The composer might tell us, ‘What are you doing to my song?’”

Abad then told Mr. Aquino that it was nearing curfew.

“Don’t worry. There’s no (imposition of) curfew yet,” the President replied, eliciting another burst of laughter from the audience.

The reference was to the 2 a.m. curfew on drinking that President-elect Rodrigo Duterte said he would impose nationally once he assumed office.

When he returned on stage for the third time, Mr. Aquino did his version of “The Impossible Dream,” a popular song from the Broadway musical “Man of La Mancha” and the favorite song of his late father, Sen. Benigno “Ninoy” Aquino Jr.

Before leaving, the President led the crowd in singing “Bayan Ko,” a patriotic song from the 1898 zarzuela “Walang Sugat” by Severino Reyes that became popular during the fight against the martial rule of the dictator Ferdinand Marcos.

Not a few in the audience cried as they flashed the “Laban” sign while singing with the President.

READ: ‘I am what I am because of martial law’