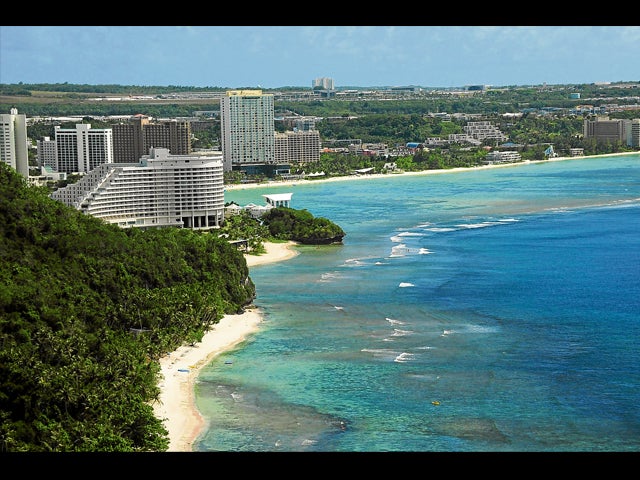 Tax-free shopping is often top of mind when one mentions Guam. Malls filled with luxury brands are located minutes away from discount stores selling off-season items. This US territory is the largest and most populated island in Micronesia, although one can drive from one end to the other in a couple of hours.

Tumon, considered Guam’s fashion and shopping area, has the DFS Guam Galleria, The Plaza along The Pleasure Island strip, and the Tumon Sands Plaza. Beyond Tumon, shoppers flock to the Agana Shopping Center in Hagatna, Guam Premier Outl ets in Tamuning and Micronesia Mall in Dededo. Public transport on the island is spotty at best, but one can either hire a car and driver to take you around, or board the red trolley that picks up passengers at the bigger hotels and drops them off at the shopping areas.

Many Filipinos who want to have their passports with their US visas stamped prefer Guam over the US mainland as the flight to Guam is shorter—just 3 ½ hours compared to half a day if you go to the US West Coast. Until recently, however, there were only a couple of airlines to choose from.

Two months ago, low-cost carrier Cebu Pacific commenced regular flights to Guam that led to a 125 percent increase in the number of Filipino travelers. It was the second best March tourist surge in recent history, just a few counts behind the 2013 record.

Guam Governor Eddie Calvo was upbeat about the regular Cebu Pacific flights—along with flights from United Airlines and Philippine Airlines—boosting arrivals especially leading up to the Pacific Asia Travel Association’s annual summit (held last May 18-21, and the Festival of Pacific Arts (May 22-June 4).

The Festival of Pacific Arts has been held every four years since 1972. It brings together artists and cultural practitioners from around the Pacific region for two weeks of festivity. It is recognized as a major regional cultural event with 27 countries participating this year.

If you want some local color, go to the Sheraton Laguna Guam Resort (470 Fahrenholt Ave., Tamuning, Guam) for dinner and the nightly cultural show. Each performance consists of rousing dances and songs ending in a fire dance where guests are invited onstage.

The hourlong performance might not seem like much but the ancient Chamorro culture is actually rich and goes back several thousand years to a time when its first inhabitants were seafarers who likely originated from Southeast Asia. The connection many Filipinos have with Guam can probably be traced to this or the fact that Spain ruled both the Philippines and Guam until the signing of the Treaty of Paris in 1898.

“It feels like home, it feels familiar,” said Cebu Pacific vice president for marketing and distribution Candice Iyog at the maiden flight to Guam last March.