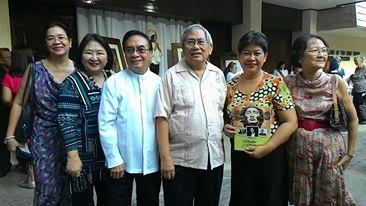 Mounted twice—at the College of the Holy Spirit (CHS) on Mendiola Street, Manila, and later at the Pine Hills Hotel in Malaybalay, Bukidnon—the concert was to raise funds for the San Lorenzo Ruiz Global Ministry (SLRGM), which promotes devotion to the first Filipino saint among overseas Filipino workers (OFW).

San Lorenzo Ruiz de Manila, who was martyred in Japan in the 17th century, is the patron saint of migrant workers.

Despite the terrible heat, some 700 flocked to the Paraclete Auditorium of CHS for a delightful musical program.

As expected, Sunico, president of the Cultural Center of the Philippines and dean of the University of Santo Tomas Conservatory of Music, stunned the audience with his masterful rendition of three preludes by Rachmaninoff; two etudes and a polonaise by Chopin; and “Aragon” by Federico Longas.

On the second part of the program, Sunico similarly enthralled the audience with his rendition of his arrangements of Ernani Cuenco’s “Bato sa Hangin” and George Canseco’s “Hanggang sa Dulo ng Walang Hanggan.”

He also did interpretations of “Liebestraum” and “Vallee d’Obermann” by Lizst, and a composition by Ravel.

Peñaverde was just as impressive with his charismatic singing and looks. Opera Magazine of New York, where he is now based, has called him an “incisive tenor.”

With his powerful and soulful voice, he made the audience swoon as he sang Agustin Lara’s “Granada,” Rodgers and Hammerstein’s “Some Enchanted Evening,” and Francisco Santiago’s “Madaling Araw.” He was accompanied on the piano by Najib Ismail, a much sought- after collaborative pianist and chamber musician.

Peñaverde, a UST graduate and holder of Master of Music degree, major in Voice, from the Manhattan School of Music in New York, has performed in various lead tenor roles with the New York City Opera, Kennedy Center for the Performing Arts, Tuscia Opera Festival of Italy and Bronx Opera Company.

The Ambassadors of Light chorale fittingly opened the concert with the San Lorenzo Ruiz hymn by Fr. Manuel “Benildus” Maramba, the Benedictine musician, who was in the audience.

All the performers later gathered for the finale “This Is the Moment,” from the musical “Jekyll and Hyde” by Frank Wildhorn.

The same repertoire was performed in Malaybalay, which was described by Irene F. Carrascoso, daughter of the host, Dr. Pablo and Thelma Figaroa of Pine Hills Hotel, as “one for the books.”

On the hotel poolside and under the moon, the artists rendered music that made the night magical.

Peñaverde captivated the local belles with his renditions of Gershwin’s “Someone to Watch Over Me” and Willy Cruz’s “Sana’y Wala Nang Wakas.”

Sunico performed his own arrangements of “Buhat” by Mike Velarde; “Usahay” by Greg Labia and “Matud Nila” by Ben Zubiri; and “Bayan Ko” by Constancio de Guzman. His finale, “Rhapsody in Blue” by Gershwin, elicited thunderous applause.

Artist Fernando “Pando” Manipon exhibited his painting of San Lorenzo Ruiz, using the medium he is known for—dried leaves. Reproductions of his artwork were put on sale, proceeds of which went to SLRGM.

Father Diaz said that, aside from the CHS scholarship program, proceeds would go to the enthronement of San Lorenzo Ruiz images in airports and the production of taped Holy Masses for OFWs, especially those in the Middle East.

He added the concerts were also a tribute to the late religion columnist Josephine Darang of the Inquirer.

Board members of the SLRGM were also there: Remedios Dizon, Flora Libay, Remedios de Jesus, Pilar Caluag and Nilo Chincuanco.