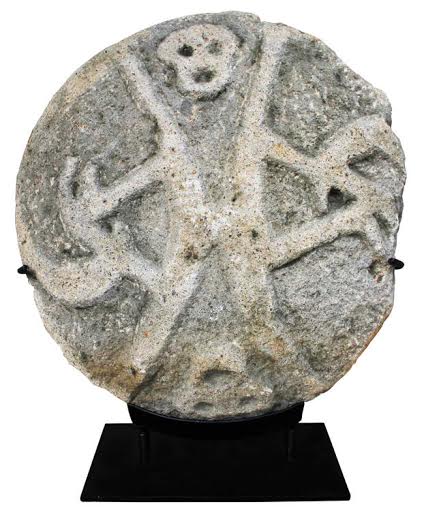 Easily one of the most awaited bidding would be for the precolonial funerary jar lid. It has a starting price of P120,000.

“It gives us a peek into a very rarely seen side of our history, one closer to our origins than our history books,” he said.

“Although naturally possessive of a grim undertone, what with their primary purpose, these jar lids feature some of the earliest art born from our people and stand as a testament to our inclination to the afterlife and the mythical ‘beyond.’ Historically, this very piece also provides evidence that sheds light on our earlier practices and rituals—from crafting to burial.”

Another interesting old work would be the watercolor painting of the Bulacan Town Hall, which the catalogue says, might be the oldest painting in the Philippines since Bulacan was founded in the late 16th century.

But Ponce de León clarified that there was a correction. Initially thought to have been made around 1584, the work is not is not the oldest Philippine painting.

“Upon further research, we found out that the painting’s inscription refers to Don Hurtado de Saracho, who, according to the Archivos General de Indias (the repository of Spain’s colonial records), served in the Philippines as alcalde of Albay in 1770, where he served for just one year—pinning the year of this work to 1770,” Ponce de León said.

“Although not the oldest Philippine painting, the condition in which the work has been kept is superb. A fine piece of 18th century history!”

Brother to the first National Artist of the Philippines, Pablo Amorsolo’s works featured “some of the finest portraiture and realism of the time—among the ranks of that of his brother’s,” Ponce de León noted. Having met his demise in the war, however, there are very few extant pieces by Pablo Amorsolo, adding to the rarity of the very work.

From the Los Prieto collection is Felix Resurreccion Hidalgo’s oil on canvas “Chateau d’If” (P4 million), which bears a dedication from the artist to Don Mauro Prieto.

“The work is a very painterly, yet masterful rendition of the fortress-prison in Marseilles, France, and the violent sea that surrounds it,” Ponce de León noted. “Hidalgo’s use of elements akin to that of Luminism and Impressionism come together to constitute this powerful display of technical prowess.”

A noteworthy piece of furniture is the Chest of Drawers with Escritorio, made in the third quarter of the 19th century. It has a starting price of P500,000.

According to social historian Martin Imperial Tinio Jr., a chest of drawers with an escritorio or fall front desk is not ordinary and very difficult to find in the market and so much more being in kamagong.

“Found only in houses whose owners were men of affairs, they were usually found in the cuarto mayor or master bedroom and thus served as the repository of important deeds or documents,” Tinio said. “Sometimes, the escritorio was made with secret drawers concealed among the numerous compartments to safeguard valuables and money.”

The Hizon Aparador, from the second quarter of the 19th century, has a starting bid of P800,000. The Hizons are Chinese mestizos, considered among the first families of Pampanga, who originally came from Tambobong, now known as Malabon.

“This aparador with a kamagong carcass stands on four squat cabriole legs with sturdy shoulders ending in graceful feet,” Tinio noted. “Narra apron boards with a convex outline are in front and at the sides.”

Another important piece is the Bantug Vitrines, which stands on four tapering square legs ending in spade feet. It will be auctioned off starting at P1 million.

“This particular pair of kamagong vitrines is not only unique, but is undoubtedly the most beautiful of its kind that has ever come to the antique market in more than half a century,” Tinio said.

National Artist Jose Joya’s “Golden Friendship,” a huge 48” x 64” abstract work by the iconic modernist, will be auctioned off starting at P4 millon.

Ronald Ventura’s “Void” (P3 million) and “Dead End” (P1.6 millon) are among the highlights of the sale.

“Coming from different periods in [Ventura’s] career, there is an evident stylistic difference in the two works—such, laying emphasis on the artist’s predilections and how these have changed,” Ponce de León said.